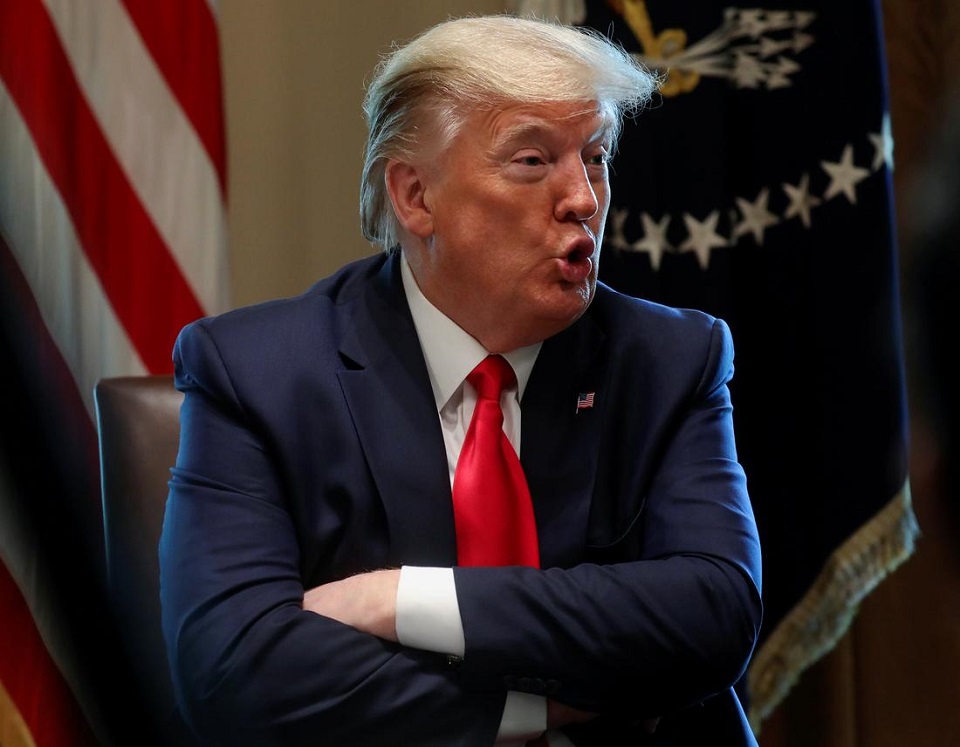 WASHINGTON/SYDNEY, April 15: U.S. President Donald Trump on Tuesday halted funding to the World Health Organization over its handling of the coronavirus pandemic, prompting criticism from other countries and medical experts as the global death toll mounted.

Trump, who has reacted angrily to attacks on his administration’s response to the worst epidemic in a century, has become increasingly hostile towards the WHO.

The Geneva-based organisation had promoted China’s “disinformation” about the virus that likely led to a wider outbreak than otherwise would have occurred, Trump said.

WHO had failed to investigate credible reports from sources in China’s Wuhan province, where the virus was first identified, that conflicted with Beijing’s accounts about the spread and “parroted and publicly endorsed” the idea that human to human transmission was not happening, Trump said.

“The WHO failed in this basic duty and must be held accountable,” Trump told a White House news conference on Tuesday.

There was no immediate reaction from the WHO.

Nearly 2 million people globally have been infected and more than 124,000 have died since the disease emerged in China late last year, according to a Reuters tally.

U.N. Secretary-General Antonio Guterres said it was not the time to reduce resources for the WHO.

“Now is the time for unity and for the international community to work together in solidarity to stop this virus and its shattering consequences,” he said in a statement.

The United States is the biggest overall donor to the WHO, contributing more than $400 million in 2019, roughly 15% of its budget.

New Zealand Prime Minister Jacinda Ardern said the WHO was essential to tackling the pandemic.

“At a time like this when we need to be sharing information and we need to have advice we can rely on, the WHO has provided that,” she said. “We will continue to support it and continue to make our contributions.”

China urged the United States on Wednesday to fulfil its obligations to WHO. Foreign Ministry spokesman Zhao Lijian said the pandemic was at a critical stage and that Washington’s decision would affect the whole world.

Australian Prime Minister Scott Morrison said he sympathised with Trump’s criticisms of the WHO, especially its “unfathomable” support of re-opening China’s “wet markets”, where freshly slaughtered, and live, animals are sold.

“But that said, the WHO also as an organisation does a lot of important work including here in our region in the Pacific and we work closely with them,” Morrison told an Australian radio station.

“We are not going to throw the baby out of with the bathwater here, but they are also not immune from criticism.”

John Sawers, the former head of Britain’s MI6 foreign intelligence service, said China concealed crucial information about the outbreak from the rest of the world and that it would be better to hold China responsible rather than the WHO.

More than 2,200 people died in the United States on Tuesday, a record toll according to a Reuters tally, even as it debated how to reopen its economy.

New York City, hardest hit by the outbreak, revised its death toll sharply up to more than 10,000, to include victims presumed to have died of the lung disease but never tested.

U.S. health advocacy group Protect Our Care said Trump’s WHO funding withdrawal was “a transparent attempt ... to distract from his history downplaying the severity of the coronavirus crisis and his administration’s failure to prepare our nation”.

“To be sure, the World Health Organization is not without fault but it is beyond irresponsible to cut its funding at the height of a global pandemic,” said Leslie Dach, the group’s chair.

The WHO said the number of new cases was tailing off in some places, such as Italy and Spain, but outbreaks were growing in Britain and Turkey and the pandemic had not reached a peak.

Dozens of cases have been recorded among oil and gas workers in Brazil, the industry regulator told Reuters, exposing an outbreak far worse than thought.

India extended a lockdown on its 1.3 billion people until May 3 as its tally of cases exceeded 10,000. Prime Minister Narendra Modi said economic sacrifices were needed to save lives.

New cases in China dropped to 46, compared with 89 the previous day, with one more death. Most cases were people returning from Russia.

Global shares dipped into the red on Wednesday as warnings of the worst global recession since the 1930s underlined the economic damage done during the pandemic.

The world economy is expected to shrink by 3% this year, the International Monetary Fund said, marking the steepest downturn since the Great Depression.

Trump, who has declared he will decide when to lift U.S. lockdowns, suggested some Democratic state governors were “mutineers” after New York Governor Andrew Cuomo said he would refuse any order that risked reigniting the outbreak.

Airlines have been hit hard as borders have closed and people stay at home. China’s airlines reported a total loss of $4.8 billion in the first quarter, its regulator said.

The U.S. Treasury Department said major airlines had agreed in principle to a $25 billion rescue package, ensuring their workers have jobs until October while the industry battles its biggest-ever crisis.

NEW YORK, April 28: U.S. cases of the novel coronavirus were approaching 1 million on Tuesday, having doubled in 18... Read More...

NEW YORK, April 24: Unemployment in the U.S. is swelling to levels last seen during the Great Depression of the... Read More...

Blaming China is a dangerous distraction

LONDON – As the COVID-19 crisis roars on, so have debates about China’s role in it. Based on what is... Read More...