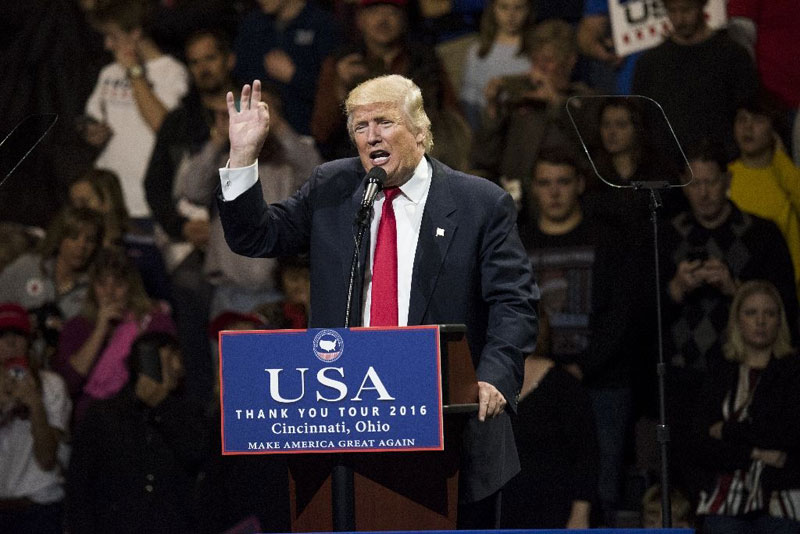 NEW YORK, Dec 3: President-elect Donald Trump broke with decades of cautious US diplomacy to speak with the president of Taiwan, at the risk of provoking a serious rift with China.

It was not immediately clear whether Trump's telephone call with President Tsai Ing-wen marked a deliberate pivot away from Washington's official "One China" stance.

Beijing's Foreign Minister Wang Yi told Hong Kong's Phoenix TV on Saturday the call was a "ploy by the Taiwan side that simply cannot change... the One China framework."

"I do not think it will change the one-China policy that the US government has insisted on applying over the years," Wang was quoted as saying.

"The One China principle is the cornerstone of the healthy development of Sino-US relations, and we do not want any interference or disappearance of this political foundation," he added.

China regards self-ruling Taiwan as part of its own territory awaiting reunification under Beijing's rule.

During Friday's discussion, Trump and Tsai noted "the close economic, political and security ties" between Taiwan and the United States, according to the president-elect's office.

As he came under fire for the move, Trump later took the unusual step of defending directly on Twitter the highly sensitive diplomatic subject of his decision to speak with Tsai.

He first tweeted that Tsai initiated the call, one of several he has had with world leaders in recent days, and brushed off criticism for speaking directly with the leader.

"Interesting how the U.S. sells Taiwan billions of dollars of military equipment but I should not accept a congratulatory call," Trump wrote in a second tweet sent an hour after the first one.

Tsai told Trump she "hopes the US can continue to support Taiwan in opportunities to participate and contribute to international issues," and called his hard-fought election victory "admirable," her office said in a statement.

President Barack Obama's White House said the outgoing US administration had not changed its stance.

"There is no change to our longstanding policy on cross-Strait issues," National Security Council spokeswoman Emily Horne told reporters after news of the call broke.

"We remain firmly committed to our 'One China' policy," she added. "Our fundamental interest is in peaceful and stable cross-Strait relations."

Washington cut formal diplomatic relations with the island in 1979 and recognizes Beijing as the sole government of China -- while keeping friendly non-official ties with Taipei.

But since coming to office this year, Tsai has refused to accept the "One China" concept, prompting Beijing to cut off all official communication with the island's new government.

Tsai's Democratic Progressive Party government (DPP) defeated the Kuomintang (KMT), which had much friendlier ties with Beijing, in a landslide election victory in January.

Even before the Taiwanese outreach, Trump's unorthodox diplomatic outreach has raised eyebrows.

Until Thursday, State Department officials told reporters that he had not asked for official briefing on current policy from US diplomats before making the contacts.

On Friday, department spokesman John Kirby said the outgoing US administration has now helped with "some foreign communications that the transition team has gone forward with."

But he referred reporters to Trump's office for details and would not say whether the president-elect himself had requested any background briefings before making or taking any calls.

Asked whether Trump was among those on the transition team who received such help, a senior US official would only say that Vice President-elect Mike Pence has also made foreign calls.

Trump caused a minor diplomatic incident with a gushing call with Pakistan's Prime Minister Nawaz Sharif, reportedly dubbing him a "terrific guy" from a "fantastic country."

US presidents have had cautious relations with Pakistan, which has tense ties with Afghanistan and India and a problem with jihadist extremism, and none have visited since 2006.

Traditional US ally Britain was also embarrassed when Trump tweeted a request that it replace its ambassador to Washington with his friend, euroskeptic leader Nigel Farage.

But for some critics, in extending his hand to Taiwan, Trump crossed a dangerous line.

"What has happened in the last 48 hours is not a shift. These are major pivots in foreign policy without any plan. That's how wars start," tweeted Democratic Senator Chris Murphy.

Murphy, a member of the Senate Foreign Relations Committee, urged Trump to speed up his search for a nominee to become secretary of state and coordinate US foreign policy.

Trump has met with several senior political, diplomatic and military figures in recent days and his pick for Washington's next chief diplomat is keenly anticipated.

Romney or Corker would be reassuring choices for the foreign policy establishment, but many of Trump's supporters want to see a shakeup in how Washington conducts its business.

During the campaign, Trump repeatedly accused China of manipulating its currency to harm US manufacturing and threatened to impose tariffs on some of its exports.

Transition officials have told reporters not to expect more nominations for cabinet-level posts before next week.

China says Trump clear about Taiwan, in touch with his team

BEIJING/WASHINGTON, Dec 5: U.S. President-elect Trump is clear about China's position on the Taiwan issue and China has maintained contacts with... Read More...

Two killed in bus-motorcycle head on collision
4 hours ago