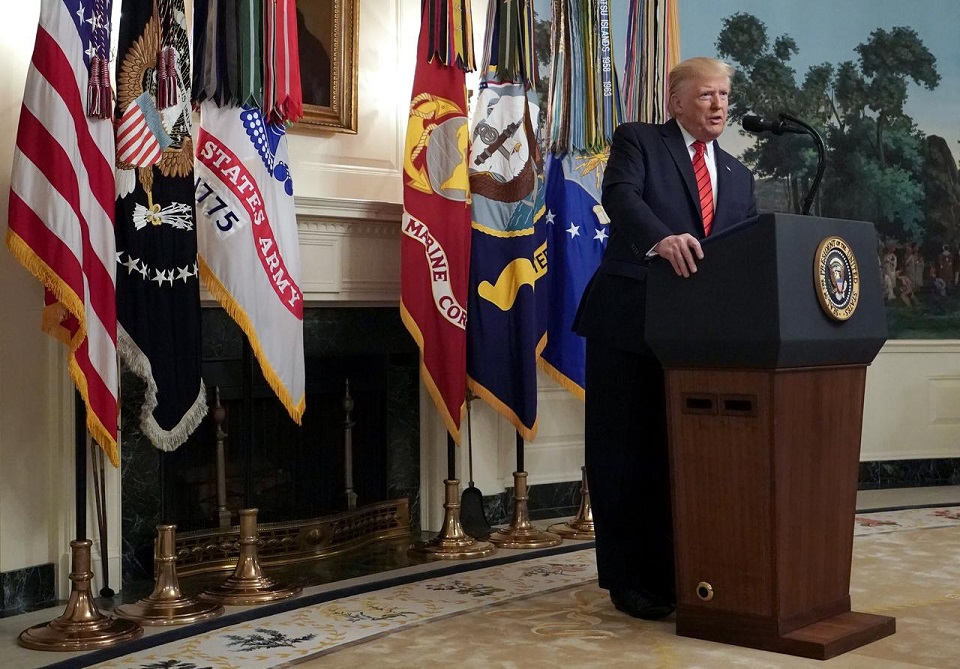 WASHINGTON, Oct 31: A deeply divided U.S. House of Representatives took a major step in the effort to impeach President Donald Trump on Thursday when lawmakers approved rules for the next stage, including public hearings, in the Democratic-led inquiry into Trump’s attempt to have Ukraine investigate a domestic political rival.

In the first formal test of support for the impeachment investigation, the Democratic-controlled House voted almost entirely along party lines - 232 to 196 - to move the probe forward in Congress, which could damage Trump ahead of the 2020 presidential election.

The vote demonstrated unity among Democrats who accuse Trump of abusing his office and jeopardizing national security. But they did not pick up a single Republican vote.

“It’s a sad day. No one comes to Congress to impeach a president,” House Speaker Nancy Pelosi said before the vote.

Republicans accused Democrats of using impeachment to overturn the results of the 2016 election, and the White House said Democrats had an “unhinged obsession” with impeachment.

“The Greatest Witch Hunt In American History!” Trump wrote on Twitter on Thursday. The probe focuses on a request by Trump to his Ukrainian counterpart, Volodymr Zelenskiy, to investigate Trump’s Democratic political rival Joe Biden, a former U.S. vice president, and his son Hunter, who had served as a director for Ukrainian energy company Burisma.

Biden is a leading candidate in the Democratic presidential nomination race to face Trump in the November 2020 election.

Trump has denied wrongdoing. Republicans have largely stuck by him, blasting the effort as a partisan exercise that has given them little input.

“This is Soviet-style rules,” said Representative Steve Scalise, the chamber’s No. 2 Republican, as he stood next to a poster depicting the famous onion domes of Moscow’s St. Basil’s Cathedral.

Only two Democrats - Collin Peterson of Minnesota and Jeff Van Drew of New Jersey - voted against the measure. Both represent districts where Trump won in the 2016 election. Other Democrats from Trump-leaning districts, such as Jared Golden of Maine, voted yes.

If the House eventually votes to impeach Trump, that would set up a trial in the Republican-controlled Senate. Trump would not be removed from office unless votes to convict him by a two-thirds margin, something that looks unlikely as congressional Republicans have been reluctant to move against the president.

The U.S. Constitution gives the House broad authority to set ground rules for an impeachment inquiry and Democrats say they are following House rules on investigations. They have promised to hold public hearings on the case against Trump.

Members of the three committees conducting the investigation expect Morrison to fill in more of the details about Trump’s dealings with Ukraine. Morrison listened in on the July 25 phone call and said the call “could have been better,” according to acting U.S. Ambassador to Ukraine Bill Taylor.

Committee members have asked a far more prominent player, former national security adviser John Bolton, to appear next week. Others have testified that Bolton was alarmed by a White House effort to pressure Zelenskiy. Bolton’s lawyer has said he was not willing to testify unless a subpoena is issued.

UML will stay neutral regarding the resignation of the Chief Justice: Oli
58 minutes ago