Trump dominated UN, but US nationalism at odds with world 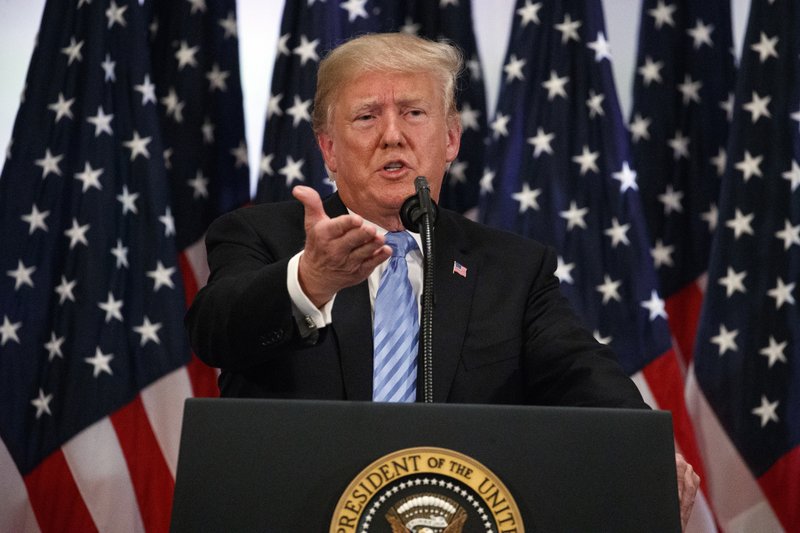 UNITED NATIONS, Oct 2: U.S. President Donald Trump dominated this year’s gathering of global leaders that ended Monday, but his rejection of “the ideology of globalism” left America almost singlehandedly holding a nationalist banner against urgent calls from an overwhelming number countries for the world to work together.

U.N. Secretary General Antonio Guterres opened the week-long meeting last Tuesday declaring that global cooperation is the world’s best hope and warning that “multilateralism is under fire precisely when we need it most.” And General Assembly President Maria Espinosa Garces wrapped up the meeting, during which all 193 U.N. member nations spoke, saying that one of its major achievements was strong global backing for the U.N. and multilateralism.

But Trump’s speech, not long after Guterres’, poured scorn on multilateralism and touted his “America First” policy, saying his administration has achieved more “than almost any administration in the history of our country,” which sparked chuckles and outright laughter from some leaders.

“We will never surrender America’s sovereignty to an unelected, unaccountable, global bureaucracy,” the U.S. president said. “America is governed by Americans. We reject the ideology of globalism, and we embrace the doctrine of patriotism.”

One of the very few countries to speak out for nationalism was Hungary, which has erected razor wire fences to keep people out. Foreign Minister Peter Szijjarto called migration the greatest challenge in history, saying “migratory waves” are creating huge security risks, destabilizing countries, and bringing terrorism to a region where it did not exist before.

“The international community must respect sovereignty of the countries,” he said.

But speaker after speaker over the week stressed the importance of global cooperation, starting with French President Emmanuel Macron, a progressive, multilateralist, who told the General Assembly: “Nationalism always leads to defeat.”

“The U.N. is the only place where we all come together to tackle these challenges,” he said, but the U.N. and other institutions established after World War II must work together to make them “more efficient, fairer and more inclusive.”

Trump faced pushback on other U.S. policies he trumpeted, including his historic meeting in June with North Korean leader Kim Jong Un and his “push for peace.” At the same time, he insisted that tough sanctions would remain until the Korean peninsula is denuclearized.

Trump also faced pushback on Iran, which he called a “brutal regime” and a “corrupt dictatorship” whose leaders “sow chaos, death and destruction.” He denounced the “horrible” 2015 nuclear deal with Iran which the Obama administration signed along with Russia, China, Britain, France and Germany, saying that’s why the U.S. withdrew and re-imposed sanctions on Tehran.

But in a rebuke to Trump, foreign ministers from the five countries that still support the deal agreed at one of some 400 meetings on the sidelines of the General Assembly to establish a financial facility in the European Union to facilitate payments for Iranian imports and exports including oil — a key move sought by Tehran to counter U.S. sanctions.

Another major issue at the global gathering was climate change — an issue not mentioned in Trump’s speech. It was raised not only by small islands that see an existential threat, but also by large countries with vulnerable coasts facing more deadly hurricanes and cyclones.

Dominica’s Foreign Minister Francine Baron, whose Caribbean island nation was decimated by Hurricane Maria’s 180 mile-per-hour winds last September, said her prime minister’s call to all countries days later at the U.N. “to come together to save our planet” hasn’t been heeded.

“Among and around us are many who still deny the reality of climate change,” she said, adding that there is still no plan to implement the 2015 Paris agreement to combat global warming, and “we have not mobilized the resources to capitalize the $100 billion per year, which was agreed upon, to assist the most vulnerable.”

The General Assembly meeting also put a spotlight on global conflicts and hotspots, large and small, from the seven-year-old conflict in Syria and the three-year-old war in Yemen that has sparked the world’s worst humanitarian crisis to the Israeli-Palestinian conflict, the Indian-Pakistani dispute over Kashmir and the Armenia-Azerbaijan clash over Nagorno-Karabakh.

Venezuela’s President Nicolas Maduro accused the U.S. of attacking his country through sanctions and other means in the meeting’s longest speech — 48 minutes. The shortest was Lithuania’s President Dalia Grybauskaite at 5 minutes, according to Assembly president Espinosa Garces.

Syria’s Foreign Minister Walid al-Moallem declared that a victory over “terrorism” is almost at hand and demanded that “occupation” forces from the U.S., France and Turkey leave the country immediately.