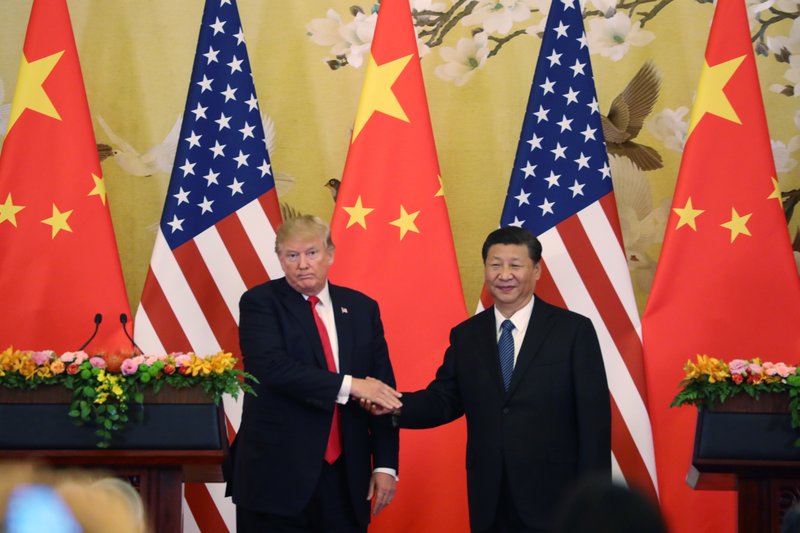 BEIJING (AP) , Nov 9:  President Donald Trump on Thursday criticized the “very one-sided and unfair” trade relationship between the U.S. and China, but stopped short of castigating Chinese President Xi Jinping by saying he doesn’t blame the country for taking advantage of the U.S.

Speaking after the announcement of new business deals between U.S. and Chinese companies, Trump said the U.S. and China “must immediately address the unfair trade practices that drive” the trade deficit, along with barriers to market success, forced technology transfers and intellectual property theft.

“But I don’t blame China,” he said. “After all, who can blame a country for being able to take advantage of another country for the benefit of its citizens?

To applause, he said: “I give China great credit.”

Trump’s comments came during his second day in China and after lengthy meetings with Xi. The day included announcements that the U.S. and China had signed agreements valued at more than $250 billion for products including U.S.-made jet engines, auto parts, liquified natural gas and beef.

Such contract signings are a fixture of foreign leader visits to Beijing and are intended to defuse foreign complaints about China’s trade policies. Many of the contracts signed Thursday appeared to represent purchases that Chinese mobile phone makers, airlines and other customers would have made anyway, but the signings were scheduled for Trump’s visit.

Others included a cooperation framework on shale gas and a memorandum of understanding on industrial development.

It’s “a way of distracting from the fact that there’s been no progress in China on structural reform, market access or the big issues that the president has tried to make progress on with regard to China,” said Elizabeth Economy, the Asia studies director at the Council on Foreign Relations.

Trump had made narrowing the multibillion-dollar U.S. trade deficit with China a priority for his administration. During the presidential campaign, he accused China of “raping our country” on trade and pledged to minimize the countries’ trade imbalance.

For his part, Xi promised a more open business environment for foreign companies in China and said his country was committed to further opening its economy to foreign investment. He offered no specifics.

“China will not close its doors” and will open them “even wider,” he said, pledging that foreign companies in China, including American ones, will find the market “more open, more transparent and more orderly.”

The United States and other trading partners have been pressing Beijing to give their companies more access to its state-dominated economy.

Before the meetings, China rolled out the red carpet for Trump, treating him to an elaborate welcome ceremony on the plaza outside the Great Hall of the People before the leaders turned to their private talks.

Trump looked on approvingly as a Chinese honor guard played the national anthems of both countries, cannons boomed and soldiers marched. He clapped and smiled as children waving U.S. and Chinese flags and flowers screamed and jumped wildly.

China also poured on the pomp and pageantry for Trump’s arrival Wednesday. The president and first lady Melania Trump were greeted at the airport by dozens of jumping children who waved U.S. and Chinese flags. The couple spent the first hours of their visit on a private tour of the Forbidden City, Beijing’s ancient imperial palace. It’s usually teeming with tourists but was closed to the public for the presidential visit.

The Trumps walked alongside Xi and his wife through the historic site and admired artifacts from centuries’ past. Trump posed for photos and, with a wave of his hand, joked to Xi about the reporters watching. And he laughed and clapped along during an outdoor opera featuring colorful costumes, martial arts and atonal music.

We inherited a mess. It took us time to clean up, but COVID-19 changed everything: Dr Yuba Raj Khatiwada
2 hours ago

We inherited a mess. It took us time to clean up, but COVID-19 changed everything: Dr Yuba Raj Khatiwada
2 hours ago