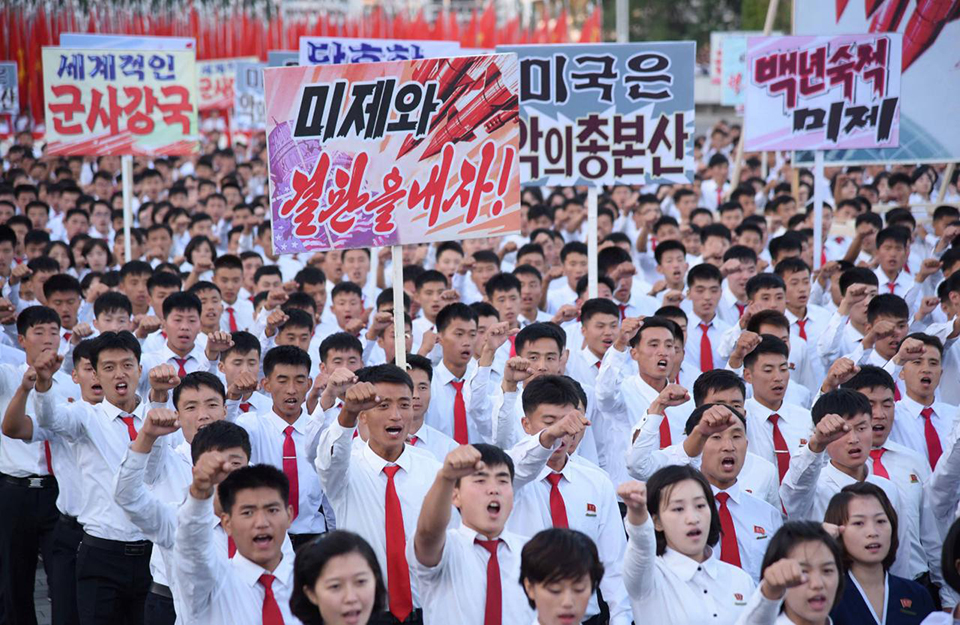 SEOUL/UNITED NATIONS, September 24: U.S. President Donald Trump dialed up the rhetoric against North Korea again at the weekend, warning the country’s foreign minister that he and leader Kim Jong Un “won’t be around much longer”, as Pyongyang staged a major anti-U.S. rally.

“Just heard Foreign Minister of North Korea speak at U.N. If he echoes thoughts of Little Rocket Man, they won’t be around much longer!” Trump said on Twitter late on Saturday.

Trump and Kim have traded increasingly threatening and personal insults as Pyongyang races towards its goal of developing a nuclear-tipped missile capable of reaching the United States - something Trump has vowed to prevent.

Analysts say the escalation in rhetoric is increasing the risk of a miscalculation by one side or the other that could have massive repercussions.

The North’s official KCNA news agency said more than 100,000 people gathered for the rally on Saturday and delivered speeches supporting comments made by Kim earlier in the week.

“We are waiting for the right time to have a final battle with the U.S., the evil empire, and to remove the U.S. from the world,” KCNA quoted Ri Il-bae, a commanding officer of the Red Guards, as saying. “Once respected Supreme Commander Kim Jong Un gives an order, we will annihilate the group of aggressors.”

In an unprecedented direct statement on Friday, Kim described Trump as a “mentally deranged U.S. dotard” whom he would tame with fire.

Kim said the North would consider the “highest level of hard-line countermeasure in history” against the United States and that Trump’s comments had confirmed his nuclear programme was “the correct path”.

Kim’s comments came after Trump threatened in his maiden UN address on Thursday to “totally destroy” the country of 26 million people.

It was not clear from Trump’s latest tweet if he was referring to Ri and Kim, or North Korea more broadly.

North Korea conducted its sixth and most powerful nuclear bomb test on Sept. 3, prompting another round of U.N. sanctions. Pyongyang said on Friday it might test a hydrogen bomb over the Pacific Ocean.

“It is only a forlorn hope to consider any chance that the DPRK (North Korea) would be shaken an inch or change its stance due to the harsher sanctions by the hostile forces,” Ri told the UN General Assembly on Saturday.

U.S. Air Force B-1B Lancer bombers escorted by fighters flew in international airspace over waters east of North Korea on Saturday in a show of force the Pentagon said indicated the range of military options available to Trump.

The U.S. bombers’ flight was the farthest north of the demilitarized zone separating North and South Korea that any U.S. fighter jet or bomber had flown in the 21st century, the Pentagon said.

The patrols came after officials and experts said a small earthquake near North Korea’s nuclear test site on Saturday was probably not man-made, easing fears Pyongyang had exploded another nuclear bomb just weeks after its previous one.

The United States and South Korea are technically still at war with North Korea because the 1950-53 Korean conflict ended with a truce and not a peace treaty.

The North accuses the United States, which has 28,500 troops in South Korea, of planning to invade and regularly threatens to destroy it and its Asian allies.