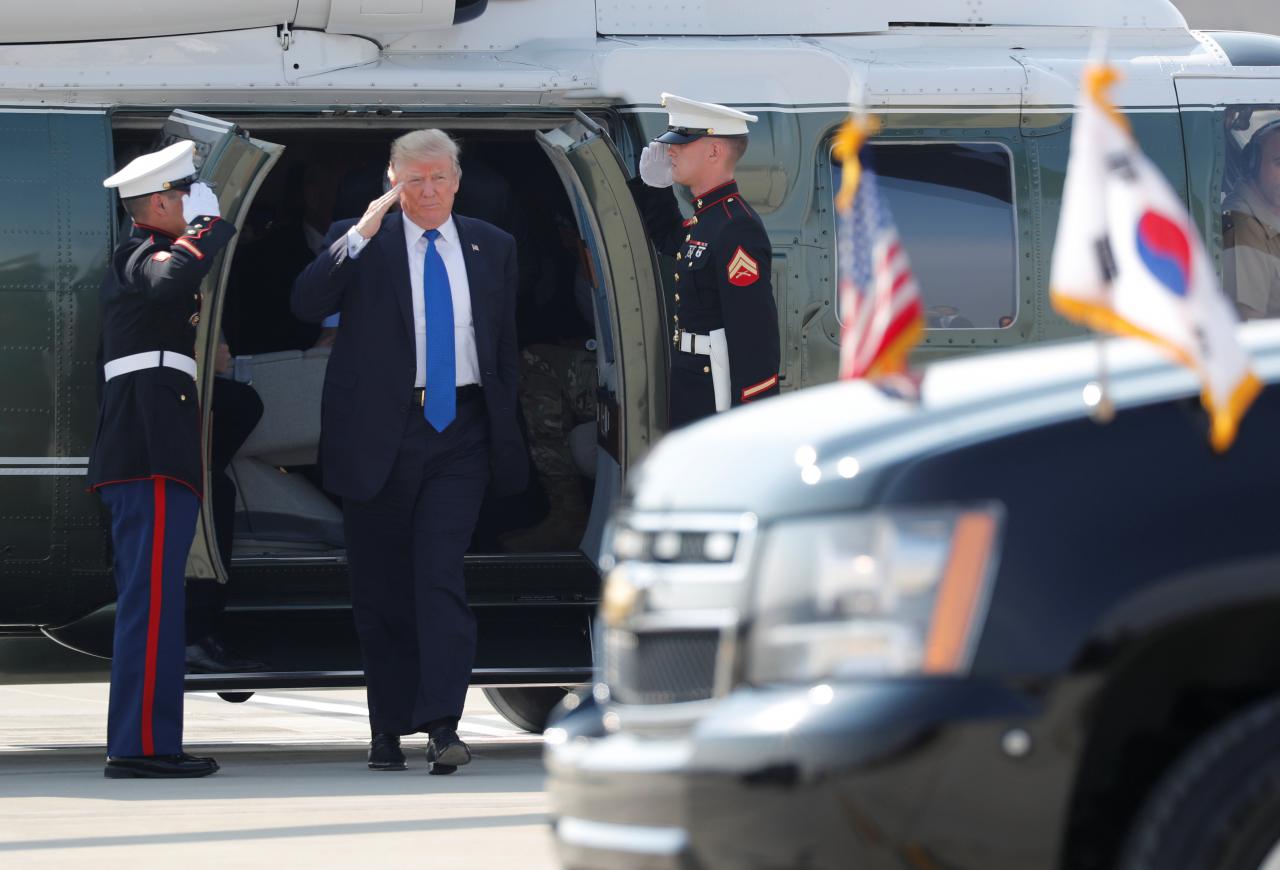 CAMP HUMPHREYS, South Korea (Reuters) - President Donald Trump on Tuesday flew into South Korea, the closest he has come to the frontlines of the nuclear standoff with North Korea, saying a solution must be found to the security threat posed by Pyongyang.

Landing at Osan Air Base outside Seoul, the president and First Lady Melania Trump stepped down from Air Force One onto a red carpet as he began a 24-hour visit that could aggravate tensions with North Korea.

He then flew by helicopter to Camp Humphreys, the largest U.S. military base in the country, and met U.S. and South Korean troops, along with South Korean President Moon Jae-in.

The White House says Trump’s trip is intended to demonstrate U.S. resolve over his hardline approach to the North Korean nuclear and missile threats, but many in the region fear further bellicose presidential rhetoric could increase the potential for a devastating military conflict on the Korean peninsula.

Meeting with military commanders about the North Korea issue, Trump told reporters: ”Ultimately it will all work out, it always works out, it has to work out”. He did not elaborate.

Trump praised president Moon, hailing him for “great cooperation,” despite differences over how to confront North Korea and over a trade pact between the United States and South Korea.

Pyongyang’s recent nuclear and missile tests in defiance of U.N. resolutions and an exchange of insults between Trump and North Korean leader Kim Jong Un have raised the stakes in the most critical international challenge of Trump’s presidency.

Three U.S. aircraft carrier strike groups will exercise together in the Western Pacific in the coming days in a show of force rarely seen in the region, U.S. officials said.

On the second leg of his five-nation trip, Trump toured the sprawling Camp Humphreys garrison, which lies about 100 km (60 miles) from the border with reclusive North Korea.

Trump was greeted with applause and a few cheers as he and president Moon entered the mess hall at lunch hour.

Trump is seeking to ratchet up pressure on Pyongyang following his visit to Tokyo, where he declared that Japan would shoot North Korean missiles “out of the sky” if it bought the U.S. weaponry needed to do so, suggesting the Japanese government take a stance it has avoided until now.

North Korea has not conducted a missile test for 53 days, the longest such lull in testing this year. North Korean state media has not commented on Trump’s arrival in the South.

South Korea’s spy agency said last week that North Korea may be preparing another missile test, raising speculation that such a launch could be timed for Trump’s trip to the region.

U.S. officials have said privately that intercepting a test missile is among options under consideration, though there is disagreement within the administration about the risks.

The South Korea leg of Trump’s trip is an effort to present a united front despite differences with Moon over how to confront North Korea, as well as Trump’s complaints over the two countries’ trade agreement and South Korean defense spending.

Trump has criticized Moon over his support for diplomatic engagement with Pyongyang – something the U.S. president once called “appeasement” – and has threatened to pull out of a free trade pact between the two countries.

“Hopefully that will start working out, and working out so that we create a lot of jobs in the United States which is one of the reasons that I‘m here,” Trump told reporters, referring to trade issues between the two countries.

Trump has rattled some U.S. allies with his vow to “totally destroy” North Korea if it threatens the United States, for deriding Kim as a “Rocket Man on a suicide mission” and for dismissing as pointless any diplomatic engagement with Pyongyang.

Kim, who has also made clear he has little interest in negotiations, at least until North Korea develops a nuclear-tipped missile capable of hitting the United States, has called Trump a “mentally deranged U.S. dotard.”

The North accuses the United States, which has 28,500 troops in South Korea, a legacy of the 1950-53 Korean war, of planning to invade and regularly threatens to destroy it and its Asian allies.

Trump’s visit to Camp Humphreys gave him a first-hand view of the massive military assets the United States has in place in South Korea, but it also could serve as a reminder of the cost in U.S. military lives – as well as the potential massive South Korean civilian losses – if the current crisis spirals into war.

Trump, however, will steer clear of the heavily fortified demilitarized zone (DMZ) zone on the border between the two Koreas - where other U.S. presidents have visited - a move that might have been seen by North Korea as more of a provocation.

Role of Jyapu community in development of agricultural economy is important: PM Deuba
14 minutes ago

Nepal should be known to the world through Newari culture: Prakashman Singh
44 minutes ago
NC Work performance Committee meeting on Saturday
1 hour ago