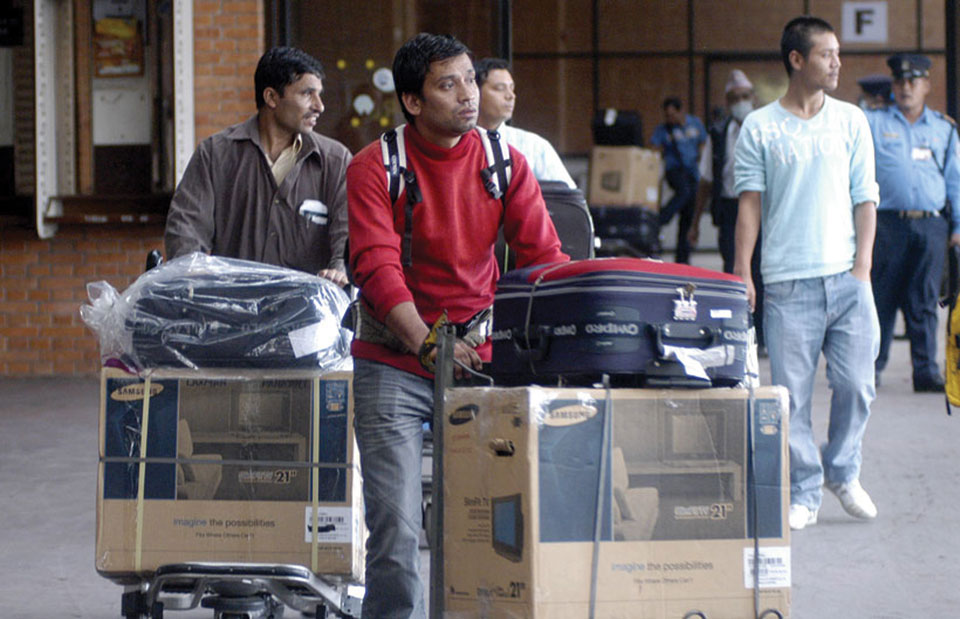 This one is more on arrival experience with passing reference to runway refurbishment works that have just begun. As is well known, TIA as the entry port is more famous for its negative attributes than anything else. Being the only international airport it is naturally frequented by high flying travellers including majority of tourists and businessmen. A general Nepali will not fly unless compelled. Being accustomed to low level of facilities all around we tend not to complain, knowing that it is not going to make much difference either way.

Other travellers, perhaps, take it as a bitter experience of poor management and poorer facilities they are more likely to remember for long. We arrived just after eight PM on March 29 from Varanasi (VNS), the closest Indian destination by air. This is penned more out of a resentful experience at the arrival immigration counter. The flight was full with overwhelming Nepalis, less Indians and even fewer backpackers.

Insensitive authorities
As Nepali we felt it was too much of callousness and insensitivity on the part of authorities to make us use the immigration counter that was exclusively marked for the “Indians”. It was demeaning being treated as such in one’s own country. The other functioning counter was for diplomats and visa holders and naturally we could not use it. Little did I know I was also destined to have the same bitter experience like the person who had shared his in a Tweet a day earlier. “Since when have we become non-Nepali in our own country?” was my question to person behind the counter. This led to short burst of argument but the officer had no qualms compelling people resenting to pass through it much like animals being herded into a pen. He gloated as if he was doing a great service letting us through. Other person, with his ID tag tucked into pocket, lamented that there was not enough manpower and they could not be blamed for the muddle. It was fine if there was only one counter for all those who needed no visa, but it becomes unacceptable once a counter is dedicated to people from another country. A short search led to “TIA / Nepal Immigration first quarterly report (75/76)” which lists 3 arrival desks (A5-A7) for Nepali and 2 (A3-A4) for Indians.

Later, in the baggage claim area I was told by fellow passengers that they had heard the two regretting not having seized my passport. We shudder to think about the future of this country when we have people, right through the bureaucratic hierarchy, oozing arrogance from every pore. Such an engrained attitude on the part of officers who happen to be the first to interact with any incoming visitor does not bode well under any circumstances. It is more critical as we are planning to have another go at Visit Nepal Year in not too distant a future not knowing if previous ones had any impact. It will be more opportune to put one’s house in order first than going after promotion with the dismal state of the logistics and manpower that visitors laugh at.

The blame for the unwarranted incident squarely lies on the insensitive bureaucrats of Home Ministry. Possibly, TIA administration had no role in this as the Home Ministry rules supreme while TIA gets a bad name. The three most visible entities that are seen working in TIA are Immigration, Customs and Police. But unscrupulous elements among the “prominent three” seem to be at the core, working seamlessly in effecting every high profile smuggling rackets that have been known so far. It is not just gold or foreign currencies that are smuggled, they are said to be equally adept at facilitating human traffickers as well.

TIA muddles
A report published by Centre for Investigative Journalism (CIJ) lists series of muddles at the hands of TIA immigration more due to design than anything else. It enlists cases like persons on red corner watch going unnoticed. They conveniently resort to excuses like the “server being down” to help blacklisted person get visa extension or assist them to fly out. It is said that they even let out Iranian with forged Israeli passports. Instances of giving passport of one to another, without as much of a glance, highlight their overall callous attitude. All “credit” goes to immigration officer, for ruining the first ever Nepal visit of a friend. As a result, he had to get a new passport besides buying expensive business class ticket to Doha skipping India as his passport was given to another person ahead in the queue. In another instance, some unknown person happened to fly out of TIA using the lost passport of a French tourist. No wonder, a job at TIA immigration is taken as “plum posting”.

On other non-immigration related issues, one gets a smack of high level swindling right at the departure hall. The duty free shops are locked and empty as there is a case filed against the business enterprise, allegedly belonging to close relatives of a high profile politician. They seem to owe millions of rupees in outstanding TIA dues. The case is said to be pending in the court and it will be possibly decades before if it ever gets decided or the arrears recovered. As such, Air Asia of Malaysia has stopped flying to Kathmandu with Rs 130 million it owes to the airport. TIA had even held one of its aircraft for few hours but let it go with nothing more than a tepid assurance from its embassy here.

As regards just started existing runway rehabilitation works, a Chinese company has secured the job. Hopefully, it will guarantee best quality works and get it done in time. But the 300 meters extension beyond ‘02’ threshold is said to be entrusted to a joint venture between two Nepali firms. Incidentally, one of the two was also the JV partner with another Chinese company, for the construction of east side helicopter bays that was discovered to have serious works quality issues. Surprising still, a firm with proven poor track record was acceptable for the runway extension job.

Lately, with the involvement of private construction companies we hear more negative news about them. A Chinese company which was awarded TIA runway extension contract earlier ended being a “no show.” It was followed by an Italian company which eventually got the job but left without even starting. Chinese, otherwise, used to have reputation of doing good quality works like when Kathmandu-Kodari and Ring Road were built. It was a different kind of China then. Why is it proving difficult to retain foreign companies with requisite expertise here that they find it better to leave than work? As we all know, disputes and litigations have often bedeviled most big constructions here. May be the contractors encounter unforeseen whammies of different sorts in Nepal. Unless all underlying issues are “honestly” identified and tackled at “all levels”, not just the top, it can be presumed that no project, however big or prestigious, will ever get done, without being embroiled in controversies.