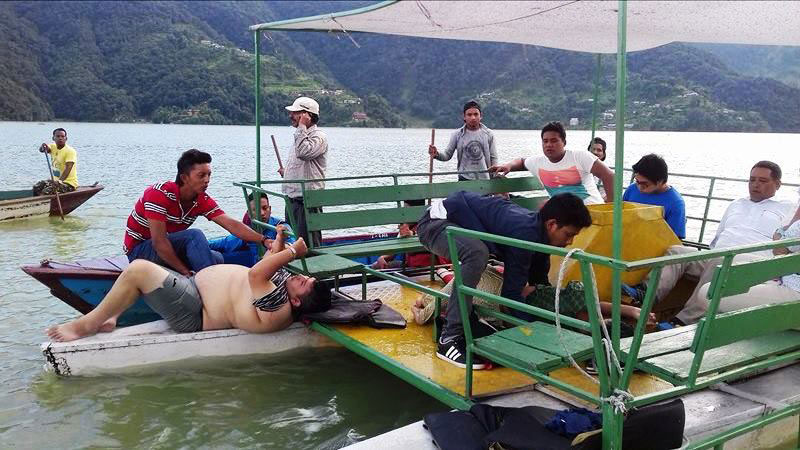 There’s no visible presence of the state in water bodies and that’s been a boon for elements bent on weakening this fledgling state
A recent boat capsize in the Fewa Lake brought back haunting memories of a near disaster in the placid waters on the eve of New Year, 2016. Had a skilled hand not been on board that day, yours truly would not have been around to tell the tale.

In the recent disaster, according to reports, two youths—Pratik Shrestha, 19, and Elin KC, 23, of Kathmandu—went missing and died when the boat sank while police managed to rescue six others on board the same boat. Some reports blamed a number of factors like high winds, disregard for the capacity of the boat (such boats, as reports go, can carry six people) and non-implementation of the rule on the use of life jackets during boat rides for the disaster.

All these factors are important for a safe ride, there’s no doubt about that. But enumerating these factors and forgetting the central factor is akin to missing the forest for the trees. The central factor, here, is the absence of law enforcement. Most probably, the two youths would not have lost their lives if there were authorities to make them wear life jackets, to prevent boat operators from letting more than six people get on board the boat and patrol boats to rush to the scene in the event of a disaster.

Back to the New Year eve near-disaster now. Even after boating for hours in the Fewa on that day (we had set out for the trip in the evening), we could not reach its banks. While my friend would steer the boat on the right course during his turn, I, a very unskilled hand, would reverse the gains somehow. Aware that this would endanger our lives, my friend took command and it took him merely half an hour to reach the shore.

Shockingly, while we were having an ordeal in the water body, neither the boat owner nor police seemed to be aware of our precarious situation. The fact that the city was in a party mood did not help. A random Internet search revealed that several countries around the world do not leave their water bodies and waterways unregulated. They have water police that work in close coordination with other law enforcement agencies to deal with crimes and disasters in water bodies and promote their conservation.

On the contrary, in Nepal, there’s no visible presence of the state in its water bodies and that’s been a boon for elements bent on weakening this fledgling state further. This absence allows unlawful mining of construction materials like sand and boulders from river beds and their unlawful export across the border down south. This allows anyone and everyone to pollute water bodies with impunity. Here, industries, factories and members of the public can dump waste and turn our living, thriving water bodies into chemical cesspools where no aquatic being can survive (the sacred Bagmati is the living proof of this.). Clean-up campaigns notwithstanding, water bodies will continue to remain living hell for aquatic beings unless and until authorities manage to keep polluters at bay by imposing hefty fine and other deterrents.

Moreover, the absence of the Nepali state in and around our water bodies has allowed our southern neighbor, which always sees surplus water flowing in Nepal’s rivers and streams, to unilaterally build dams and embankments that inundate huge swathes of our territories.

In deep slumber for the rest of the year, our state wakes up and realizes during the rainy season, when settlements along the southern border go under water, that such illegal structures are to blame for massive inundation on an unprecedented scale.

Though water insecure, we never get tired of proclaiming that we have abundant water resources even as regulatory structures built in mega river systems like the Koshi, the Gandaki and the Mahakali continue to rob us of water, power and navigation at the expense of the southern neighbor. Though Nepal is overburdened with unjust agreements like the Koshi, Gandak and Mahakali and thus devoid of boasting about great rivers partnership, our leaders seem to have appetite for ‘water-sharing deals’ that are more unjust.

Let’s not forget that we are living in times of global terrorism. In these times, infrastructure constructed to ensure power, water and other benefits to part of the neighborhood or the entire neighborhood can pose security threats, as the recent scare surrounding the Saptakoshi Barrage, whether perceived or real, has indicated. Needless to say, we cannot compromise our national security, which includes energy security, water security and food security for which we have to rely on our lifelines called rivers and streams, in the name of rivers partnership that almost always puts us at the receiving end.

So the Nepali state would do well to be on its guard and safeguard its water bodies.

All eight SAARC countries are characterized by high level of official corruption, and conflicts and widespread poverty ... Read More...

LOS ANGELES, Dec 26: Singer-songwriter George Michael, who was found dead on Sunday at his home in Oxfordshire, England, had... Read More...