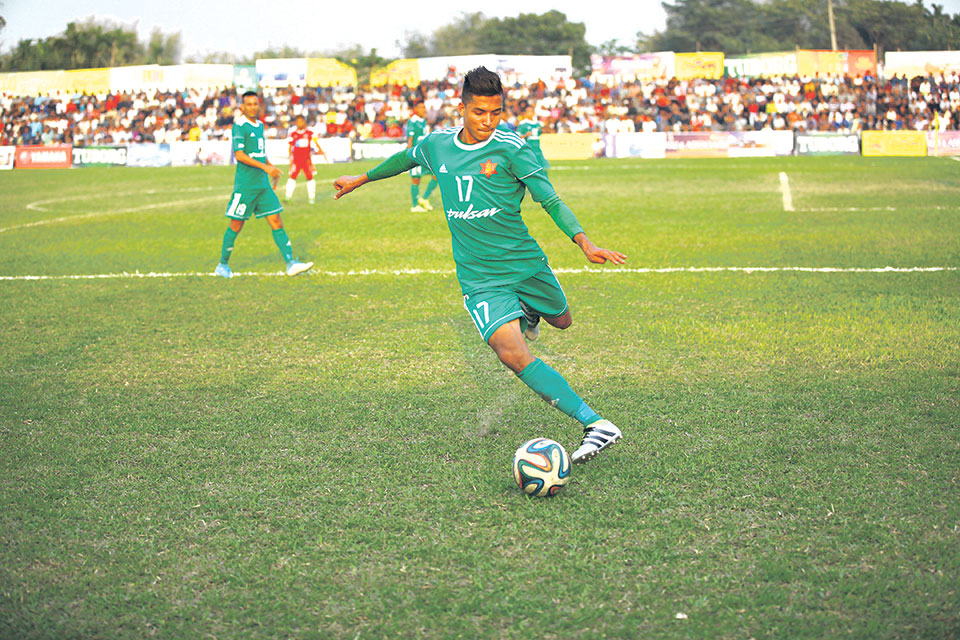 Suman Aryal of Tribhuvan Army Club in action against Nepal Police Club during a quarterfinal match of the third Jhapa Gold Cup Football Tournament at the Dom Lal Stadium in Birtamod, Jhapa on Thursday.

DAMAK, March 9: The departmental team Tribhuvan Army Club has advanced into the semifinals of the ongoing third Jhapa Gold Cup Football Tournament with a 1-0 win over the other departmental team Nepal Police Club on Thursday. Army’s George Prince Karki’s free-kick goal proved to be the decider in the match.

At the Dom Lal Stadium in Birtamond, Karki converted the free-kick in the 43rd min when Police’s Ajit Bhandari fouled Nawayug Shrestha just outside the danger area.

Both the teams got couple of good chances. Police kept Army under pressure throughout the match, but could not score a goal. Army captain Bharat Khawas’s header in the 14th minute was punched away by Police goalkeeper Shatrughan Chaudhary, while Dinesh Rajbanshi’s poor effort was easily saved by Army goalkeeper Bikesh Kuthu in the 18th minute. Also, Police’s Nir Kumar Rai’s shot in the 27th minute went just over the bar, while Rejin Subba’s header in the 30th minute grazed over the bar. Police was awarded a free-kick in the 59th minute just outside the danger area and was cleared by the Army defenders from the goal-line. Likewise, Khawas’s cross which was met by Karki in the 65th minute was saved by Chaudhary.

Similarly, Police’s Ajit Bhandari’s header was easily saved by Kuthu in the 82nd minute.
The goal-scorer Karki was named the man-of-the-match and was rewarded with Rs 25,000 for his contribution.

Army’s Chun Bahadur Thapa said that his players failed to play their expected game. “We could not show our normal game in the match as some of our players were injured,” Thapa said, “It’s important to win in football and we have defeated Police. The win over Police is itself an achievement.”

Police head coach Ananta Thapa said that his team could not play their expected game as he had set a new team. “We could not win the match as we failed to utilize our chances, and the same players had faced a defeat against Army in the Hetauda Gold Cup,” Thapa said, “The players failed in utilizing the opportunities in the match.”