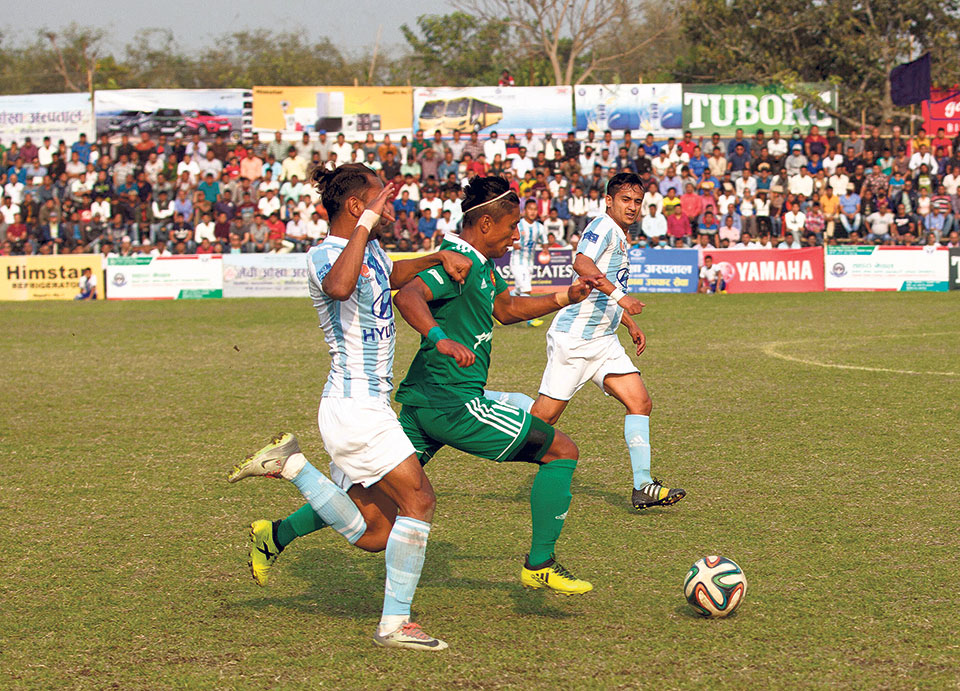 Players of Tribhuvan Army Club (green) and Manang Marshyangdi Club fight for the ball during a semifinal match of the third Jhapa Gold Cup Football Tournament at the Dom Lal Stadium in Birtamod, Jhapa on Saturday. Photo: Yuvraj Bibas/Republica

DAMAK, March 11: The departmental team Tribhuvan Army Club has advanced into the final of the ongoing third Jhapa Gold Cup Football Tournament after defeating Laxmi Hyundai Manang Marshyangdi Club 1-0 on Saturday. Army will now take on Jhapa XI in the final to be played on Monday.

Army and Jhapa had also met in the final of the first edition of the tournament. Army won the title, while Jhapa became the only team to reach the final in all three occasions.

At the Dom Lal Stadium in Birtamod, Nawayug Shrestha scored the decider in the last semifinal match. He scored in the second minute of the match to help Army reach the final.

Army got a series of chances to add to its lead in the match, but failed to convert it. Tanka Basnet was unable to double the lead in the 45th minute when all the Manang players had been beaten as they appealed for offside. The referee didn’t blow his whistle, but Basnet’s shot from a Dinesh Thapa cross went just wide.

Manang also got a lot of good chances to score, but could not utilize any of them. Manang players were denied a couple of good goalscoring chances by Army goalkeeper Bikesh Kuthu. Manang, who fielded three foreign players, including African player Victor’s shot in the 10th minute hit the bar resulting from an Anjan Bista freekick. Also, Bimal Rana’s poor shot went off the target in the 24th minute from a Sujal Shrestha cross.

Likewise, Bista’s header in the 59th minute was punched away by Kuthu.

Army presented an attacking display in the first half, but only added to its endless list of failed opportunities.

Manang’s Dona Thapa’s freekick three minutes from time was cleared by Army defenders. Manang played an organized team performance in the second half, but failed to convert it into goals.

Army goalkeeper Kuthu was rewarded the man-of-the-match and got Rs 25,000 for his contribution.