TAC that clinched the Shatakshi Gold Cup title on Thursday last week, had to struggle for the winning run in Jhapa.

TAC could not defend its lead despite having most of the possession during the match. Army’s captain failed to convert the penalty into goal and the game ended 1-1 at the end of the 90th minute. Far-Western’s goalkeeper Ananta Sheikh easily saved Khawas’s penalty kick.

Far-Western’s captain Chetan Tharu missed the penalty while Narendra Chhetri and Rakesh Hamal’s penalties hit the crossbar. But, all the penalty takers for Army were successful excluding Khawas. Nawayug Shrestha, who came in place for injured Bharat Khawas in the later stage of the match, along with Dipak Gurung, scored for TAC.

TAC’s coach Nabin Neupane agreed that his team had to struggle to win the match.
“Far-Western played a defensive game, while we attacked frequently,” Neupane said: “But, we conceded a goal in the counter-attack.”

Neupane added that captain Khawas was poor in the finishing because he had played as a striker rather than a left winger. Had Khawas been successful in finishing, they would have produced a big margin win, Neupane further added. But, Khawas had wasted about half a dozen opportunities to score.

Dinesh Hemjan had scored a solo goal for TAC in the eighth minute of the match. Dinesh scored when the Far-Western players gave up the possession assuming he was off-side.

Far-Western was in confusion after conceding a goal early on in the game. But, TAC was unable to add to their lead after missing many opportunities to find the net.

Far-Western’s goalie saved Khawas’s header from inside the box in the 14th minute, while Khawas again missed a golden opportunity inside the danger area to score when he could not shoot in the frame in the 18th minute.

Khawas also missed a chance in the 24th minute when he failed to control a cross from Bibek Basnet. Sheikh moved ahead to get the ball and score in an empty net.
Khawas also missed in the 29th, 38th and 53rd minutes.

Far-Western was compelled to play a defensive game when TAC continued attacking in the Far-Western’s post. But, they scored in the 58th minute in counter-attack to make it 1-1. Jeevan Chaudhary scored a beautiful goal from a pass from Rajendra Thagunna when most of TAC’s players were forward. Jeevan shot from 30 yards giving no chance for goalkeeper Bikesh Kuthu to save it.

Far-Western looked confident after leveling with a strong team like TAC. They kept the TAC on pressure with a score after failing to attack for 58 minutes of the match.
Far-Western, which played a defensive game again in the last 10 minutes, was defeated eventually in the tie-breaker.

“The team is satisfied with the competitive performance it presented against the strongest team of the country,” Far-Western’s coach Suresh Hamal said, “The main reason for the loss was missing the penalties. They had not missed penalties until now.”

Dinesh was declared the man-of-the-match as he scored a goal for the winning side.
Host Kakarbhitta Football Training Center will take on Himalayan Sherpa Club in the last quarterfinal match on Monday. 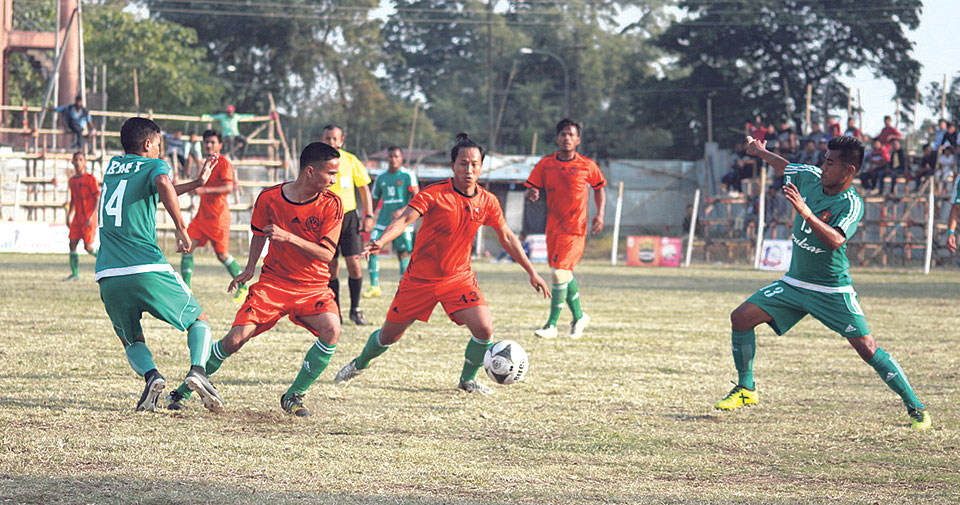