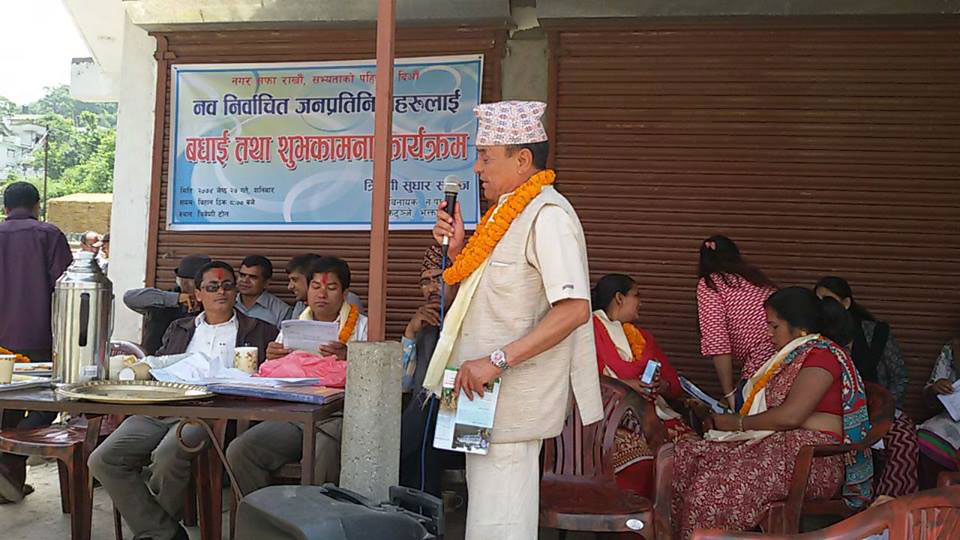 Speaking at the event, Raj Kumar Joshi, newly elected ward chairperson of Suryabinayak Municipality-5, said that he will do his best to fulfill the commitments expressed before the locals within three years.

Joshi added that the drinking water will be distributed to all the locals of Tribeni Tole for Rs 12,125 against Rs 15,000 fixed by Drinking Water Management Committee, Katunje.

He further said that he would dedicate his whole stint as ward chairperson to materialize his promises expressed before the elections without discriminations, be them home-grown or newly migrated.

Likewise, Mahendra Khanal, vice chairperson of the Samaj, congratulated the newly elected body, expressing full cooperation with the local body to develop it into a model village during their five-year tenure.

Prem Pokharel, a local, urged the local body to make immunization facility available in the ward itself, review admission fee at schools and blacktop the roads in the village.

Meanwhile, Nepal Pollution Control and Environment Management Center (NEPSEMAC) representative Govinda Acharya, who was invited to the event, said the organization promised to collect waste in Tribeni Tole at a nominal fee of Rs 200 and would even reduce it to Rs 175 as an incentive if the households segregate and recycle bio-degradable waste into nutrient-rich and materials useful in the kitchen garden.

According to him, this program will be launched from the second week of June.

Ganesh Gimire, chairperson of the Samaj, expressed his full dedication to give a facelift to Tribeni Tole in cooperation with the newly elected body.

He vowed to fix transmission line and boxes, blacktop road and install drainage system in the village.

Chaired by Gimire, the program was coordinated by Bhupal Acharya, secretary of the Samaj.

UML candidate Raj Kumar Joshi was elected as chairperson of Ward No. 5 of the municipality, securing 1,480 votes in the first phase of local elections on May 14.

KATHMANDU, Aug 5: In course of developing 240 model public schools in the country, the Ministry of Education (MoE) has... Read More...

KATHMANDU, July 1: Bhawana Ghimire has decided to leave Cricket Association of Nepal (CAN). Ghimire who was appointed as CEO... Read More...