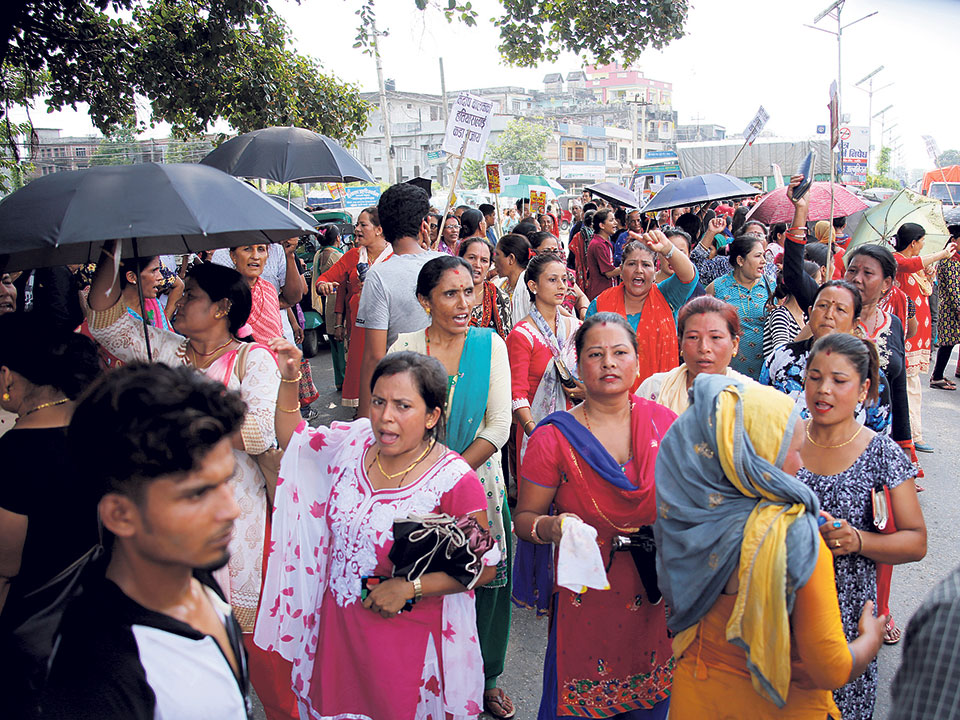 Locals of Jhapa stage a protest rally in front of Area Police Office, Anarmani demanding action against the murderer of 11-year-old Laxman Shiwakoti of Ajandhara Municipality of the district. The body of Shiwakoti, who went missing on September 30, was found the following day in Birtamode. (RSS)

GORKHA, Oct 8:  Pramod Shrestha of Bhimsen Rural Municipality-8, Ghatbesi keeps travelling from Kathmandu to Gorkha during festivals like Dashain, Tihar and Makar Sankranti. Recently, he was travelling in a public bus when the helper forced him to get off on the way instead of taking him to his destination.

“I was going to Ghatbesi but passengers of Ghatbesi were compelled to get off before reaching the bus station of Ghatbesi,” Shrestha complained, adding, “The vehicles have been charging hefty fares, carrying passengers beyond the vehicle's capacity and they also don't reach the last bus stop as mentioned in the ticket.”

Likewise, passengers travelling to Gorkha have been complaining that regular buses of the same route are not taking their passengers to their final destination. The regular buses of Bhachek, Arughat, Borlang, Takukot and other places don't move until all seats are packed. As a result, passengers have to wait for a long time even during rush.

When left in the middle of the way, passengers ask to return their ticket fares but the helpers refuse to do so. Although, there are about 200 regular vehicles running in the remote areas of Gorkha, there is scarcity of vehicles during festivals.

Moreover, it has been the usual practice for the transporters to charge hefty fare taking advantage of the festivities in Nepal.

Passengers have complained that due to the collusion of officials of the management committee, the entrepreneurs, vehicles owners, drivers along with the helpers, very few transport companies operate buses during festivals in Gorkha.

Gyandendra Shrestha, director of the transportation management committee, informed that stern action will be taken against all those breaching traffic rules.

KATHMANDU, Oct 4: Lawmakers, speaking at a meeting of the Legislature-Parliament on Tuesday, drew the government's attention towards inconveniences facing... Read More...