Training in Hungary has made me agile and flexible: Phupu 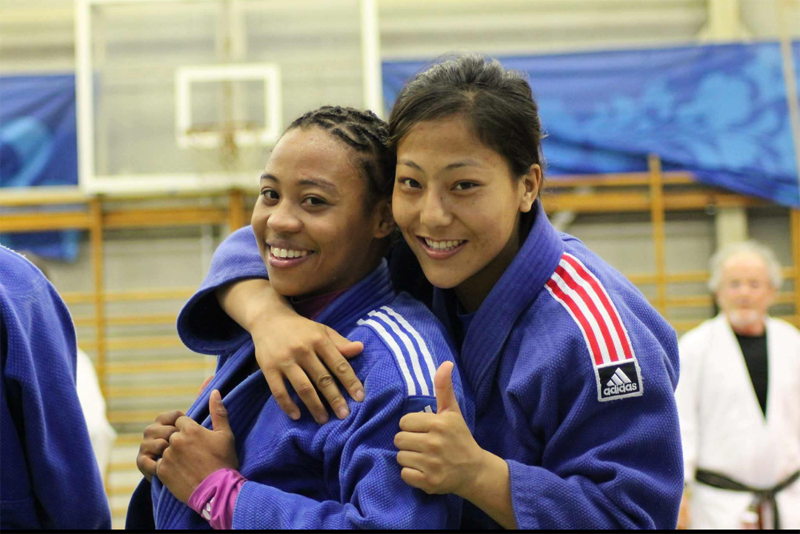 KATHMANDU, Aug 5: Judoka Phupu Lhamu Khatri's long cherished dream of playing in the biggest global sporting stage has finally materialized. However, her father Dorje Lama Khatri who instilled the dream in her is no more in this world to see her compete in the Olympics. Phupu has been chosen to represent Nepal in judo in the Rio Olympics beginning from Friday. She will compete in women’s 63 kg category in Rio.

Dorje, a trekking entrepreneur, died during an avalanche in the Everest region in April 2014. He wished to see her daughter scale the height none other has achieved in Nepal. “My father's dream has finally come true. Though he is no more with us, his guidance and inspiring words will always echo in my mind,” said an emotional 22-year-old judoka during her recent farewell for the Olympics at the National Sports Council. “This opportunity has come after hard works of eight years and I am confident of putting up a good show,” she said.

Phupu is also one of the three gold medalists of Nepal in the South Asian Games (SAG) held in India in February. She was attracted to judo since her childhood days. Winning gold medal in the SAG gave her the opportunity to carry Nepal's national flag in the opening ceremony of the Olympics.

“Phupu was different in nature since her childhood. There are many disciplines of martial arts games. Children at young age are attracted more to other games but she enjoyed judo,” said Dharma Kumar Shrestha, who trained her the basics of judo at the Multi-purpose Martial Arts Center, Nayabazar.

Phupu, who hails from Lalep, Taplejung, has been playing from the senior team since the last four years. She claimed silver medal in Ranking Judo held in Hong Kong a year ago. In the same year, she claimed bronze in the JUA Junior Championship held in Macau. For her gold medal haul in SAG, she eased past her opponents from Sri Lanka, Bangladesh and Pakistan by ippon (knockout) before beating an Indian opponent for gold.

Following her wildcard entry in the Olympics, Phupu became the fourth Nepali judoka to compete in the global stage and second woman judo player. Earlier, Ganga Bahadur Dangol, Rishi Ram Pradhan and Debu Thapa had represented Nepal from the same discipline in Olympics.

Debu Thapa, who competed in the 2008 Beijing Olympics, has been honing Phupu's skills as coach. Thapa is optimistic of a  good performance by Phupu, though her target is different from winning medal.

However, her target is something that none of the judokas have achieved in the Olympics. Debu was able to last in the mat for two minutes before losing the bout. It was the best time any Nepali judoka has set in the Olympics so far. Debu wants to see Phupu stand in the mat for the full five minutes. And the commitment and hard work of Phupu has made Debu to believe she will not disappoint the coach.

“Olympic medal is not our dream because we are not in that level. But Phupu has the willpower and eagerness to learn. She has improved a lot of late. Thus, I am confident that she will perform better and last throughout the bout.”

Phupu is also clear about her ambition. She said that she would perform confidently to achieve the responsibility entrusted on her by coach and Nepal Judo Association. “Playing for full time will be my priority. I will not lose points soon after entering the mat. Kumi kata is my strongest part,” she said.

A year-long judo (training) scholarship at Budapest, Hungary, has improved her performance and instilled lot of confidence in Phupu.  “The training in Hungary has made me agile and flexible. I have been sound technically as well,” she said. “Nearly half a dozen of players who competed with me have qualified for the Olympics. Thus, training with them has improved my performance as well,” she said.

NC has offered me for PM: Dahal