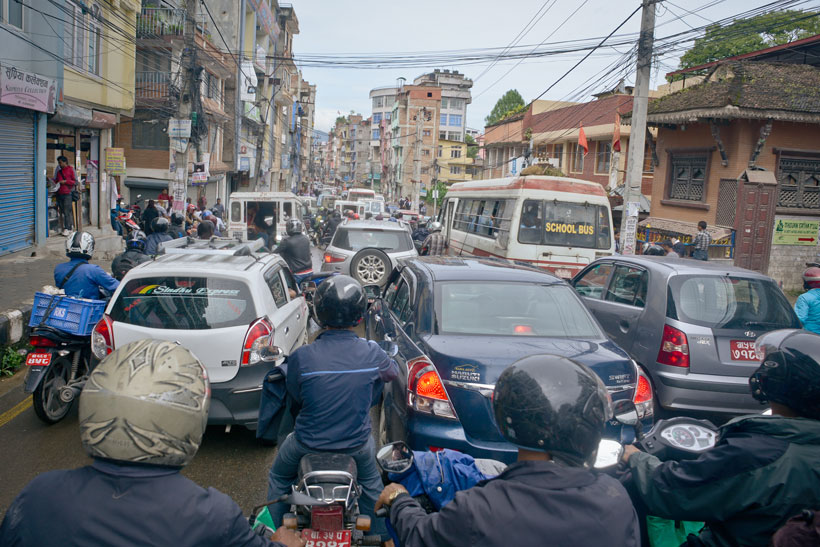 KATHMANDU, Sept 22: It has become routine for Valley residents to face the hardship of severe traffic snarls caused by VIP movements.

So it was on Wednesday also. Commuters faced much inconvenience due to traffic jams at various places as the traffic police diverted some traffic to clear the roads for beefed up security pending the arrival of Vice-President Nanda Bahadur Pun.

The vice-president was returning from the 17th Non-Aligned Movement (NAM) Summit held in Venezuela on September 17 and 18. He was headed back to his official residence at Bahadur Bhawan.

College students,office workers and other members of the general public were either stuck in traffic jams for long spells or had to walk longish distances to reach their destinations.

VVIP movements and their motorcades cause traffic jams in the capital on a daily basis.

The government should ensure safe movement for the head of state and other high officials, said Prem Lal Maharjan, president of National Consumer Forum. “At the same time, the government should not turn a deaf ear to the problems caused to the public by such movements,” he added.

It is not a good practice in a democracy to close the roads and divert traffic without prior notice every time a VVIP passes by, Maharjan said.

Such VIP movements often leave city residents fuming. They feel bad because the roads are the same for all but the rules are different for the high and mighty, he claimed. These are the same politicians who used to compolain about the public being inconvenienced by VVIP road culture during the Panchayat days, according to him.

The regime has changed and a new bunch of leaders are in power but the VVIP culture has not chaned, he said, adding that the ruling class often simply ignores the problems faced by the masses.

Asked whether there was a  solution in sight, Yadav Prasad Koirala, spokesperson at the Home Ministry, said the District Security Committee was responsible for deciding what to do.

The committee headed by the chief district officer decides what types of security arrangements are to be made including whether to halt traffic flow, he said.

Besides VVIP movements, traffic jams in the city are also caused  by political rallies, protest marches and other such activities by political and non-political players almost every day. Lack of parking space also adds to the problem.

JEREMIE, Oct 10: Survivors of Hurricane Matthew put on their Sunday finest and picked their way through downed power lines to sing... Read More...