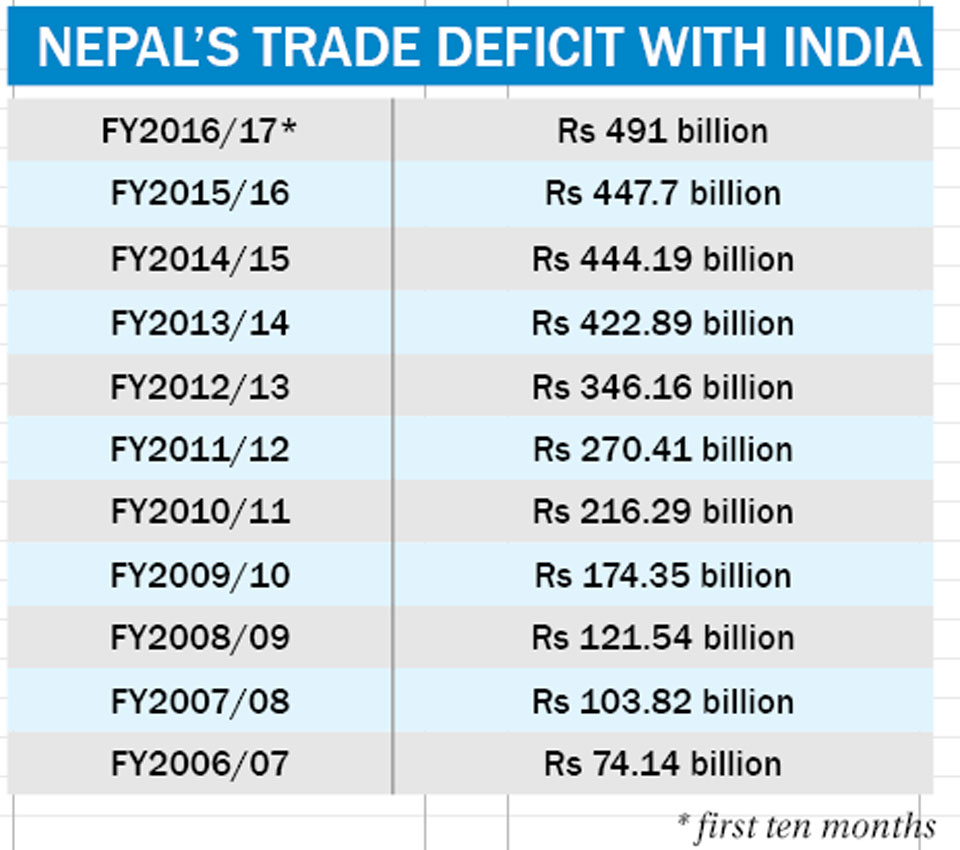 According to data compiled by Trade and Export Promotion Center (TEPC), Nepal suffered trade deficit of Rs 491 billion in the first 10 months of 2016/17 which is already higher than the total trade deficit that the country has suffered in any fiscal year.

Surge in import of products like petroleum products, iron and steel, and automobiles and machinery items by more than 40 percent is one of the reasons that shot trade deficit to the highest levels to date.

In the current fiscal year, Nepal imported goods worth Rs 526.49 billion, while it exported commodities worth mere Rs 35.7 billion. According to TEPC, the trade deficit will widen further this year as the export of the commodities like carpet, handicraft, and Nepalese paper among others have fallen significantly.

According to TEPC, nearly 57 percent of Nepal's total imports in the first 10 months of 2016/17 came from India alone.

While exports to India grew by 13.3 percent, imports from the southern neighbor surged by a massive 40.2 percent in the first ten months of the current fiscal year.

Talking to Republica, former commerce secretary Purushottam Ojha said that the trade deficit with India will widen further in the coming days if the government failed to devise strategic plans and policy to lower import from the southern neighbor and be self-sufficient in agricultural products.

“Nepal can achieve self-sufficiency in many products. But the country has been importing such products in huge volumes from India,” he said, adding that it was unfortunate that the country is dependent on India for even agri products.
“Trade deficit will gradually start falling, once the country becomes self-sufficient in agricultural products.”

He also urged the government to promote small, medium and cottage industries in rural parts of the country to increase manufacturing. “Investment in manufacturing sectors will also help to bring down trade deficit,” he added.

Iron and steel, petroleum products, automobiles, machineries, and cereals, among others, are Nepal's major imports from India. Import of thee products has been growing with each passing year.

Import of petroleum products increased by 100 percent year-on-year in the first 10 months of the current fiscal year. Similarly, import of iron and steel (38 percent), automobiles and its parts (45 percent) and cereals (five percent) also grew significantly in the review period.

Meanwhile, export of Nepal's major exportable products to India fell significantly in the review period. Export of products like woolen carpet, readymade garments, ginger, and cardamom, among others, fell by nearly 10 percent in the first ten months of the current fiscal year.

Likewise, the country's overall trade deficit in the first ten months of the current fiscal year stood at Rs 746 billion.

KATHMANDU, April 30: Nepal and India have agreed to make amendments to the bilateral Treaty of Transit to further facilitate transit... Read More...