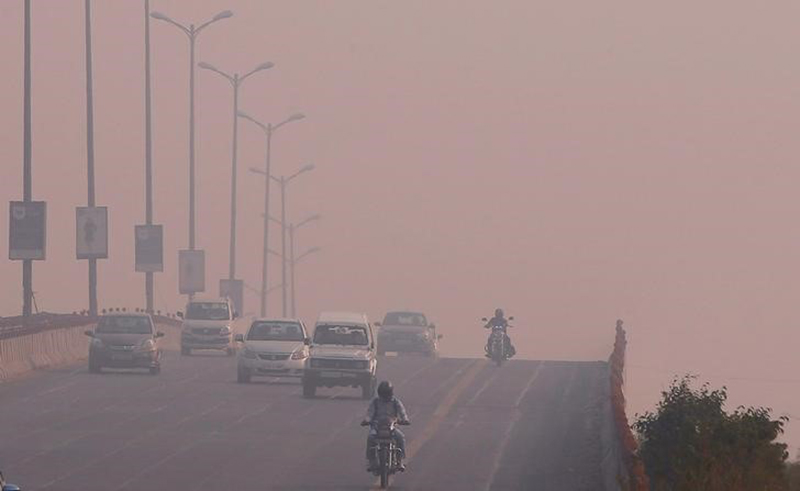 NEW DELHI, Oct 20:  Air pollution in New Delhi hit 18 times the healthy limit on Friday under a thick, toxic haze after a night of fireworks to celebrate the Hindu festival of Diwali - despite a court-ordered ban on their sales.

Residents of the sprawling Indian capital, which already ranks among the world’s most polluted cities, complained of eyes watering and aggravated coughs as levels of PM 2.5, tiny particulate matter that reaches deep into the lungs, rose alarmingly.

Air quality usually worsens in New Delhi ahead of Diwali, the festival of lights, and the Supreme Court temporarily banned the sale of firecrackers, aiming to lessen the risk to health.

But many still lit fireworks across the capital late into the night, either using old stocks or buying them from neighboring states.

Some environment activists said the court order was poorly enforced and firecrackers were still available to celebrate one of north India’s biggest festivals.

An index of air quality had crossed the “hazardous” limit of 300 on Friday, the most severe level on a U.S. embassy scale of measurement which rates a reading of 50 as good and anything above that as a cause for concern.

Some parts of Delhi such as Mandir Marg showed an air quality reading of 941, close enough to the maximum level of 999 beyond which no readings are available. The index measures concentrations of PM 2.5, PM 10, ozone, nitrogen dioxide and sulphur dioxide among other indicators.

A hazardous level is an alert in which everyone may experience ill effects and are advised to stay indoors.

Apart from the firecracker ban, the Supreme Court also ordered diesel generators and a power plant to be shut down to try to reduce the pollution. The Environment Pollution (Prevention and Control) Authority also ordered some brick kilns to close and a halt to the burning of rubbish.

Dipankar Saha, a scientist at the government’s Central Pollution Control Board, said the still weather had also played a part in the toxic haze hanging over the city.

But pollution levels were better than at last year’s Diwali when crop burning in nearby states and firecrackers combined.

“It was going to be hard to beat last year’s level in any case,” he said.