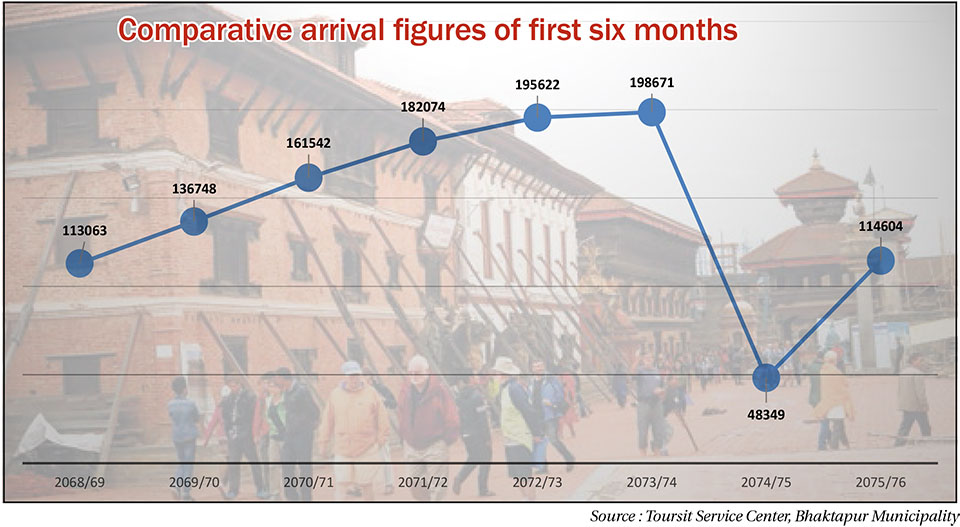 KATHMANDU, Jan 21: A little short of reminiscing the fourth year of the devastating earthquake the struck the nation in 2015, Bhaktapur Durbar Square is awaiting the number of tourists visiting the ancient town of Kathmandu Valley to bounce back to pre-earthquake figure.

The number of tourists setting foot in the Durbar Square in the first-half of Fiscal Year 2014/15 had peaked to a record 88,288, just before the earthquake.

The year following the earthquake saw the number taking a steep dive to 27,530 in the first half of FY2015/16, a decrease by 68.8 percent from the corresponding period the previous year.

"The number of tourists was growing steadily before earthquake. But as you can see from the record books, the earthquake greatly struck the confidence of tourists visiting the country," said Ramesh Thapa, general secretary of Nepal Association of Tour and Travel Agents (NATA).

He further claimed with confidence that the number of tourists arriving by the end of current fiscal's first-half will surpass the 2014/15 peak of 88,288.

President of Hotel Association of Nepal (HAN) Amar Man Shakya also appreciated the increase in tourist numbers. But there were things to improve, according to him.

Speaking with Republica, Shakya said: "The sustained increase is a positive sign. However, the number of tourists could have been much higher if not for pollution and expensive air-fare, which have been ailing tourism not only in Bhaktapur but the entire country.”

He further added: "The pace of reconstruction work has also been a major factor hindering further growth of tourism in Bhaktapur." He speculated that if the reconstruction work could easily take more than two years to complete if it continued at the current pace.

More than three years after being hit by a powerful tremor, Nepal still faces the threat of a much stronger... Read More...