Tourist arrival breaks the record of 2012 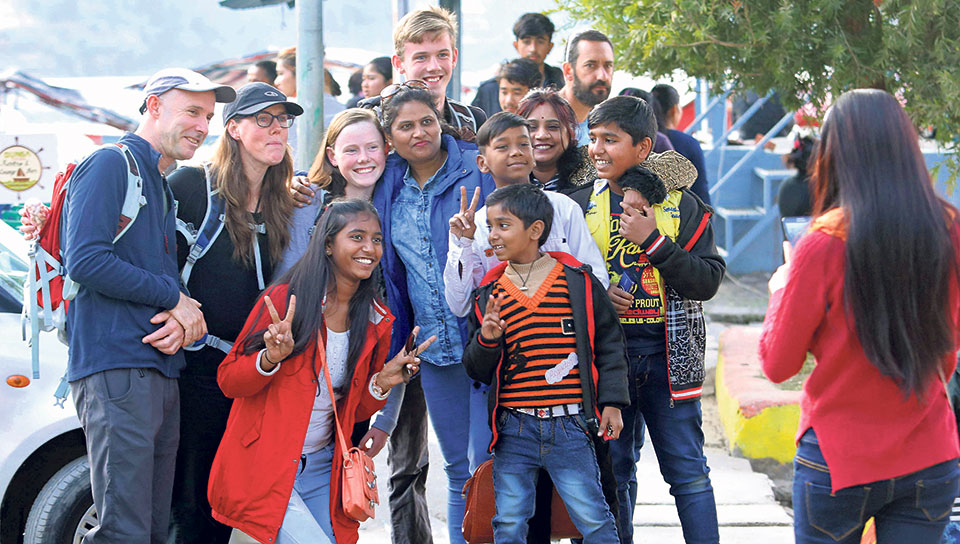 Foreign tourists pose for a photo as they celebrate New Year 2018 in Lakeside, Pokhara, on Monday.

POKHARA, Jan 2: The country has seen a record arrival of foreign tourists in 2017 since 2012, according to the statistics of Nepal Tourism Board (NTB).

Entrepreneurs have been delighted to see the rebounding of the tourism sector that was negatively affected by the earthquake and border blockade of 2015.

Entrepreneurs have been hoping that the government comes with plans and programs to further increase the number of tourists in coming days.

“Tourist arrival has to grow further. However the present growth of tourist arrival after the earthquake and blockade is also satisfactory,” said Bikal Tulachan, president of Paschimanchal Hotel Association.  “We are more hopeful for coming years.”

Unlike other countries that had to wait long to revive their tourism sectors after a big catastrophe, Nepal’s recovery of tourism industry within two years of the earthquake has been commendable, Tulachan added.

“Finally, tourist arrivals in 2017 surpassed the record high number of 2012,” Surya Thapaliya, manager of NTB Pokhara, said. “We should take it as a positive development.” Improve in tourist arrival in the country will directly impact Pokhara, he added. According to Thapaliya, the number 850,000 was only that of tourists arriving the country via air-route, and it may reach up to one million if those arriving via land route from India and third countries was counted.

According to the data of last 10 years, around 35 percent tourists coming to Nepal visit Pokhara.
According to the NTB, tourists come in from India via the eastern and western borders too. “Indians coming to Lumbini and Pokhara via Sunauli are also tourists,” Thapaliya said. “There are tourists who come via the eastern border to visit Dhankuta and Ilam, and there are tourists who come to visit Birgunj and Bhairahawa too. All of them are tourists.” So based on this growth if both local and provincial governments could promote their respective areas then 2018 will be more delightful for tourism industry, Thapaliya said.

While Intel unveiled its first commercially available drone this week with the Falcon 8+ drone, it made even bigger news... Read More...