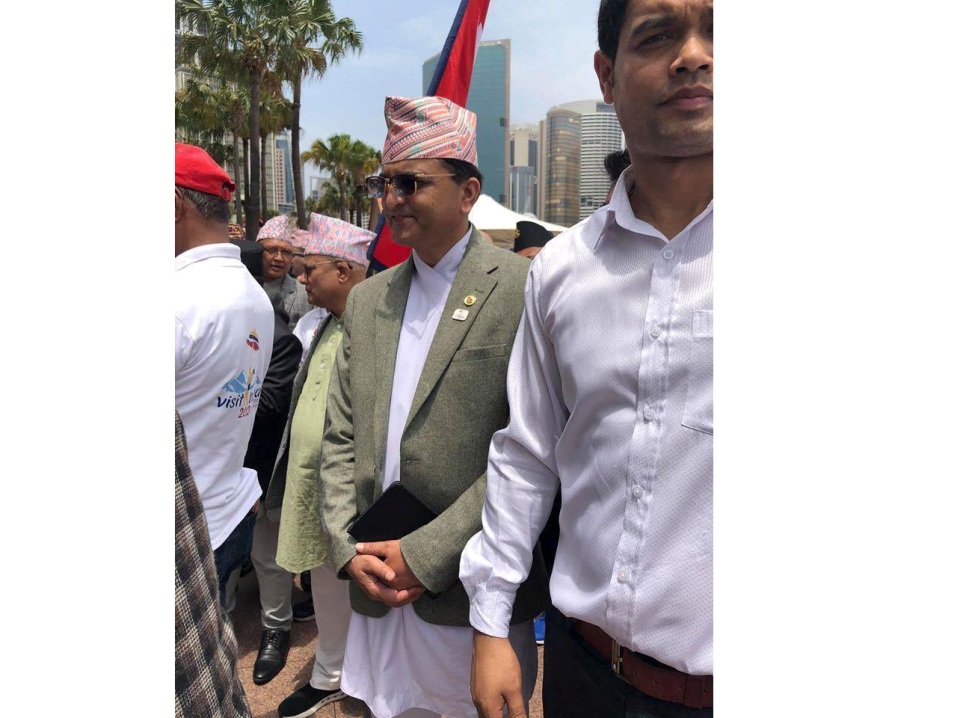 KATHMANDU, Jan 7: Minister for Tourism and Civil Aviation Yogesh Bhattarai has faced harsh criticism on social media for his ongoing visit to Australia to promote the Visit Nepal Year 2020 at a time when the country is reeling under the worst bushfire emergency in history.

However, Minister Bhattarai wrote on Facebook that the news reports regarding the tourism campaign were misleading and aimed at hurting ties with Nepal's friendly partner Australia. "Such misleading reports also tarnish our country's prestige," he said.

Contrary to media reports, Bhattarai said that the program organized to mark the beginning of Visit Nepal Year 2020 has been successfully concluded in Australia. "The program was attended and addressed by the parliament speaker of the New South Wales, ruling and opposition party leaders of Australia," he said.

Events Planning Unit of the NSW Police had explicitly asked the organizers not to conduct the “procession for a number of reasons” including the fact that the event was “promotional and for commercial gain” which was “not in keeping with the legislation regarding a right to protest”.

Police had also considered the size of the contingent of participants in disapproving today’s rally. Authorities feared the entire footpath would be taken up by the marching participants, “blocking access for pedestrians”.

Dila Kharel, Sydney-based accountant and former treasurer of Non-Resident Nepali Association (NRNA) Australia, was tasked by organizers to secure permission from the police and other relevant authorities.

He claims he informed the organizers about the disapproval and they had no plans to conduct the rally as such.

However, someone in the rally appears to have decided to lead on a full-blown march causing embarrassment for the visiting minister, the report further said.

Leumeah-resident and freelance journalist Prakash Humagain lamented the sheer mismanagement of the event attended by a visiting dignitary like the tourism minister of the Government of Nepal.

“Participants were disappointed when they saw the parade being stopped by the security personnel. They blamed the organizers for the mismanagement,” Humagain was quoted by the website as saying.

President of Non-Resident Nepali Association (NRNA) Australia, Keshav Kandel had earlier told the website that the organizers had to go on with today’s program because it was already pre-determined and that there was no knowing when or if the minister would get another opportunity to visit down under for the launch.

KATHMANDU, Jan 5: BYD, the world-renowned electric vehicle manufacturer of China, has landed in controversy in Nepal after vehicles it... Read More...

KATHMANDU, Sept 23: The students who plagiarize or hire others to prepare their thesis work that is mandatory for the completion... Read More...