Tourism minister assures GBIA runway will be ready in 6 months 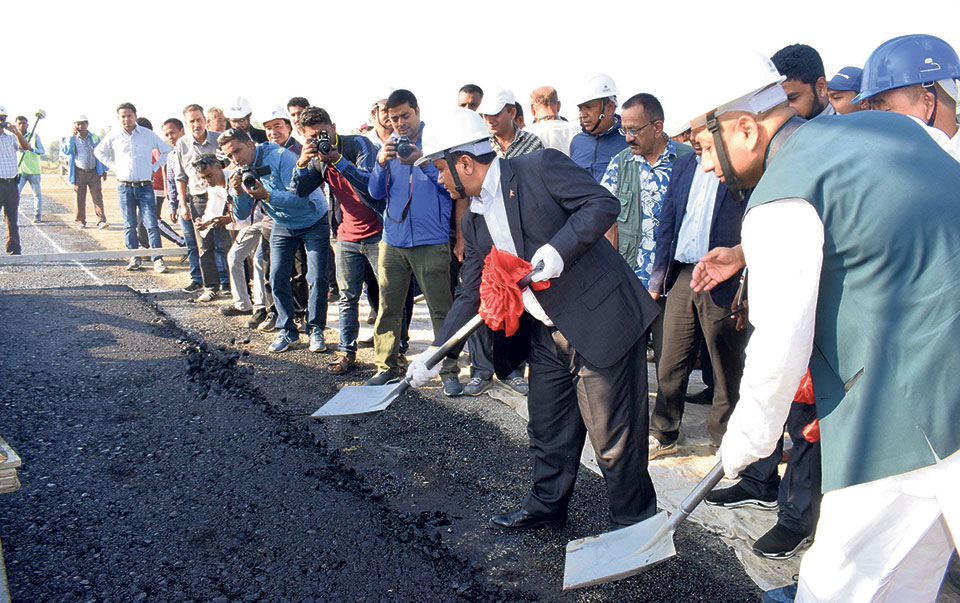 Inaugurating the work of blacktopping the runway on Tuesday, Adhikari said that contractors have committed to complete the runway within the next four months. However, the ministry has extended the time period for completion of the runway by two months.

Even before this, the minister had said that GBIA will be completely ready to welcome visitors for Visit Nepal Year (VNY) 2020.

Adhikari further assured to appoint the project chief soon, while appreciating the smooth progress of construction works under the acting project chief.

“There won’t be any problem on air route as we are working to settle it soon. We are having frequent discussion about it,” the minister said.

He further said that some international airline companies have been regularly having discussion about operating regular and charter flights in Nepal.

“Soon after the airport is ready, the upgrading of Tribhuvan International Airport (TIA) runway shall begin. Until TIA runway gets completed, GBIA runway will be used as the alternate,” the minister added.

Similarly, chief engineer of the project Prabesh Adhikari has also assured that the blacktopping of the runway will get completed within the targeted timeframe.

“Runway blacktopping has started with asphalt machine. We also have managed all required machineries and raw materials for blacktopping,” he said. “Within four months, the runway will get completely ready.”

Along with blacktopping, lighting and other mechanical works are progressing simultaneously, he added. “The current runway which is in operation will be expanded 200 meters each on both eastern and western parts, and will be upgraded to a length of 1900 meters to be used as taxiway.”

The construction of the runway has achieved 55 percent physical progress till now. According to the project committee, the airport is expected to be completed by June, 2019, as most of the work is about to get completed.

According to Adhikari, the construction of the parking area has been completed which can park five aircraft at once.