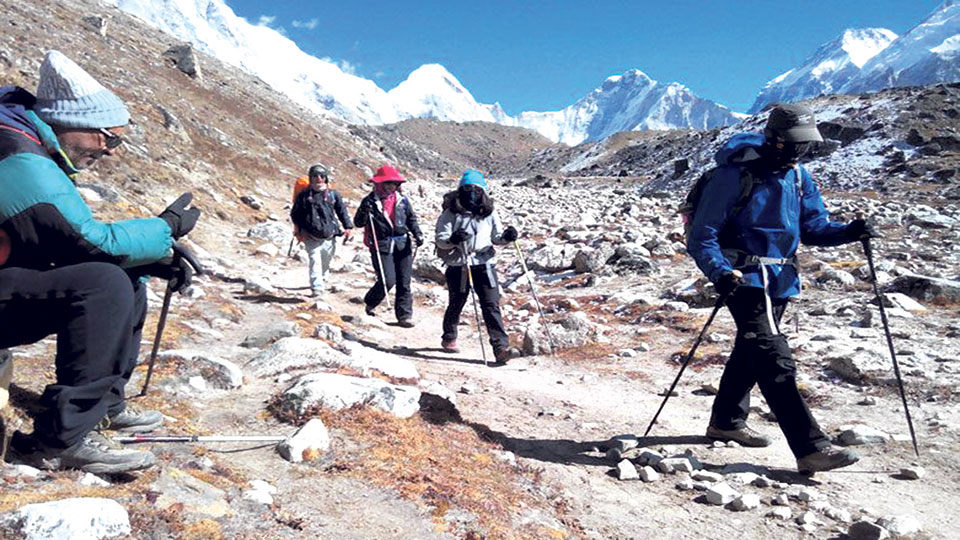 KATHMANDU, Sept 18: Trekking Agencies’ Association of Nepal (TAAN) has asked the government to clarify whether local units can levy fee on foreign tourists for entering their boundaries.

Organizing an event in Kathmandu on Sunday, that association said that its attention has been drawn at the decision of Khumbu Pasang Lhamu Rural Municipality to levy a fee of Rs 2,000 (US$ 20) on foreigners every time they enter its boundaries.

Issuing a public notice, the rural municipality said that the meeting of its executive council held on July 19, 2017 took the decision.

Speaking at the program, TAAN President Chandra Prasad Rijal said that the meeting, held in the presence of office-bearers of Nepal Mountaineering Association (NMA), decided to hold discussions with 30 agencies, including both government and non-government, to discuss the matter. “As the central bank has already been collecting entrance fee and other services taxes, it should tell us whether local units can levy similar charges on foreign tourists,” he added.

According to Schedule 8 of the Constitution of Nepal, 2015, local units can collect local tax which includes property tax, house rent tax, fee on registration of houses and land, vehicle tax, service fee, tourism fee, advertisement tax, business tax, land tax, fines and entertainment tax. However, the government has not precisely mentioned how and what amount should be charged by the local units, Rijal argued. “The government has given lot of power to the local units. It, however, failed to impose limitations regarding imposition of taxes,” Rijal told Republica.

Tourism entrepreneurs have called on the government to immediately do the needful for revising constitutional provision related to local taxes. Santa Bir Lama, president of Nepal Mountaineering Association (NMA), said that the government should have clearly defined the provisions related to imposition of taxes by local units.

“Tourism industry is our identity. Such ambiguous rules should not trouble tourists,” he said, adding: “Imposition of new taxes in the beginning of the tourist season will relay negative message about Nepal.”

As foreigners book trekking packages in advance, overnight change in rules will disappoint them, Lama added.

Dinesh Bhattarai, director general of the Department of Tourism (DoT), said that the department will work to find an amicable solution to the problem. “What I feel is that the rural municipality should have held needful discussions before taking decision to impose a new tax. Local units have the authority to collect taxes, but it should not be done in haste,” he added. “We will hold discussions with concerned government agencies and come up with an amicable solution,” he added.

KATHMANDU, September 20: The government on Monday passed the revised budget from the House of Representatives (HoR) amid the lawmakers chanting... Read More...

KATHMANDU, Sept 20: The meeting of the House of Representatives (HoR) has passed the Appropriation Bill, 2021. The bill proposed... Read More...