Totti still the King of Rome on his 40th birthday 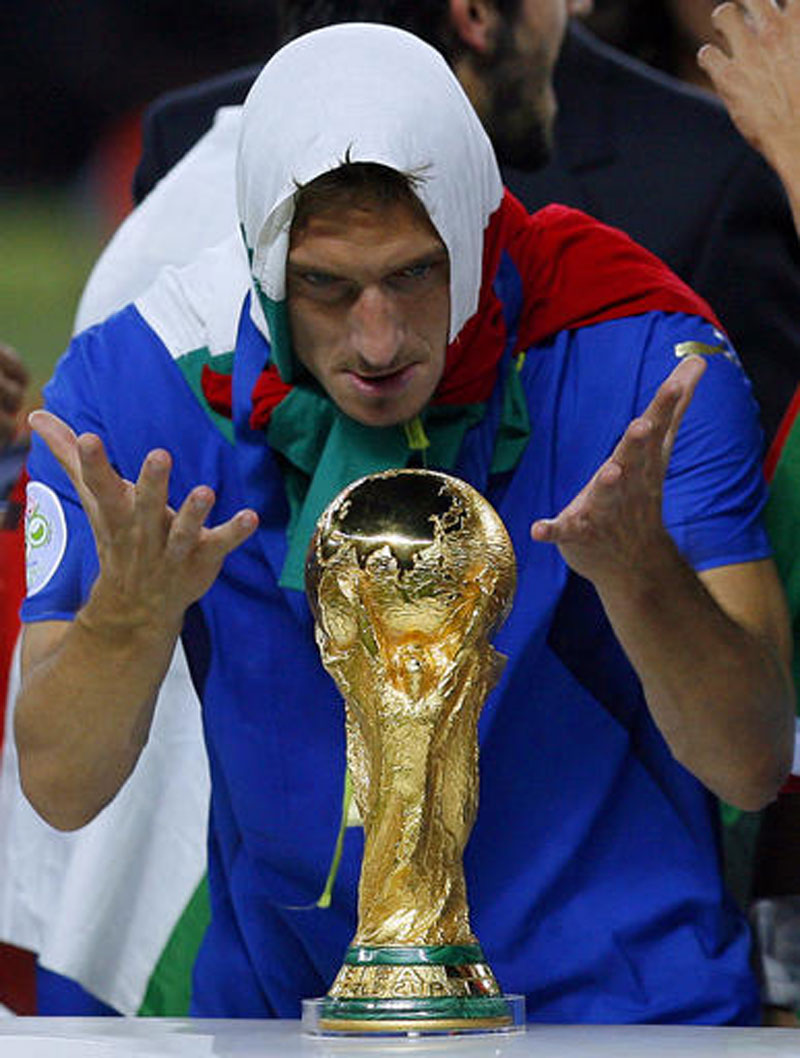 FILE - In this photo from files taken on July 9, 2006, Italy's Francesco Totti looks at the World Cup trophy after the final of the soccer World Cup between Italy and France in the Olympic Stadium in Berlin. Totti celebrates his 40th birthday on Tuesday, Sept. 27, 2016, but is showing no signs of slowing down and indeed seems to have found a new lease of life. He may not be Roma's 'Golden Boy' anymore but he is still very much 'the King of Rome.' (AP Photo/Jasper Juinen, file)

MILAN, Sept 27: At 40, Francesco Totti may not be Roma's 'Golden Boy' anymore, but he is still very much 'the King of Rome.'

Totti celebrates his 40th birthday today but the Champions League's oldest scorer is showing no signs of slowing down and indeed seems to have found a new lease of life.

There was speculation last season that maybe the time had come for Il Capitano to hang up his boots and move into the boardroom but, with six goals in his past 11 league matches and several assists, Totti is proving his doubters wrong.

Totti marked the final match of his 30s on Sunday by becoming only the second player to score 250 Serie A goals, reaching that mark with a penalty kick in Roma's 3-1 loss at Torino.

Mihajlovic had been amazed by the precocious youngster, who was giving him and his fellow first-team defenders trouble in training as well as racking up goals for the youth team.

Mihajlovic joked at the weekend that Totti owes him a dinner for that, and "it can't be at a pizzeria, it has to be oysters and champagne" before adding "he is the best player in Italy since I've been here."

And for nearly a quarter of a century Totti has been living up to those expectations. With his stunning goals and defense-splitting passes, Totti is, for many Roma fans, the epitomy of the Roman gladiator that he has tattooed on his right shoulder.

If Rome is the Eternal City, Totti is Roma's eternal leader and has been since he was first made captain in 1998, at the age of just 22.

Several teammates and coaches have compared Totti with a famous Roman monument, with Claudio Ranieri saying the star player is "as important as the Colosseum is to Rome."

He has been just as immovable.

Totti has spent his entire career at Roma and when his current contract expires, he will have had 25 years in its first team — remarkably more than 28 percent of the club's existence.

Totti could have won more than the solitary Serie A title, two Italian Cups and two national Super Cups he lifted with Roma, but he rejected offers of more money and glory to remain with his childhood club.

Totti's face adorns murals and posters across Italy's capital, where he is loved by Roma fans and respected by supporters of bitter rival Lazio, despite his antics against them.

Totti has scored 11 times against Lazio and often celebrates these extra-special goals with t-shirts made for the occasion. One famously said "I have purged you again," while he revealed another reading simply "Game Over" after a victory in May 2015.

He hit the headlines in January of that year when he scored the second of two goals against Lazio and, in a pre-planned celebration for becoming the all-time leading scorer in the derby, grabbed his phone off Roma's goalkeeping coach and took a selfie under the Curva Sud with thousands of adoring fans in the background.

Totti has also been a star for Italy and he helped the Azzurri to the European Championship final in 2000 as well as the World Cup trophy in 2006.

He grabbed global attention at Euro 2000 with one of the moments of the tournament, in the semifinals against the Netherlands. In the tense penalty shootout, the 23-year-old Totti kept his cool to cheekily chip Edwin van der Sar with his spot-kick.

Totti was named man of the match in the final, despite Italy losing 2-1 to France.

Totti played in all seven of Italy's World Cup matches in 2006 and his last match for the Azzurri was the final against France, concluding his international career with 58 caps and nine goals.

Asked what gift Totti should get for his 40th birthday, Roma coach Luciano Spalletti was among the people who suggested a time machine.

Amitabh’s special message for fans on his 75th birthday

MUMBAI, Oct 12: The ‘Shahenshah of Bollywood’, Amitabh Bachchan, celebrated his 75th birthday today and on his very special day, he... Read More...

When Moscow confectioners found out Lionel Messi would be celebrating his birthday during the World Cup, they decided he needed... Read More...

Kathmandu, Sept 27 (RSS): The senior orthopedic surgeon Dr Govinda KC, who has been staging a fast-unto-death protest for the... Read More...