Too poor to run! 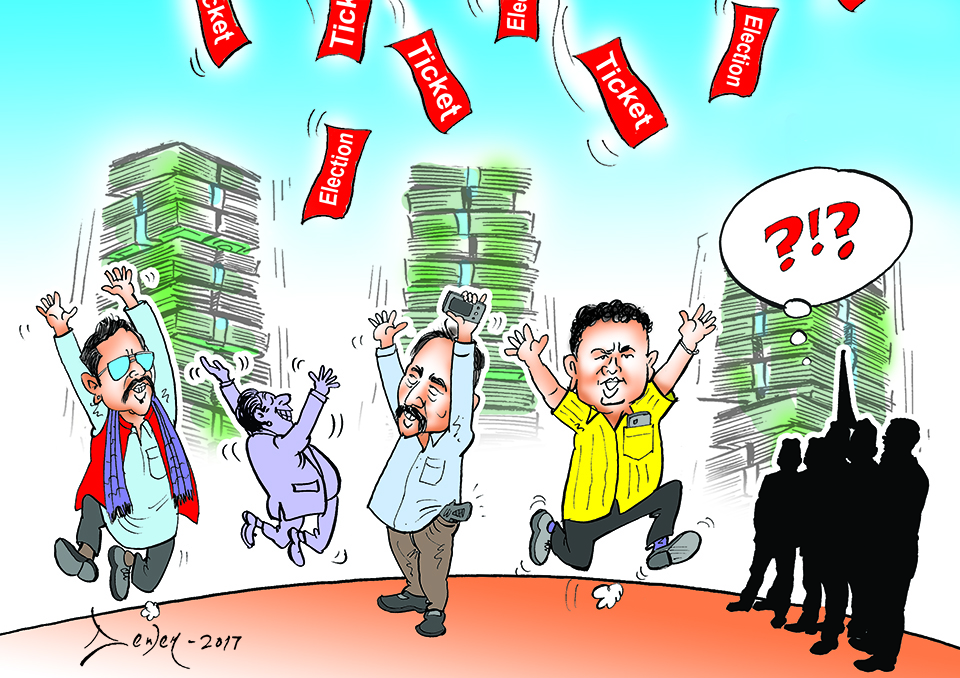 If election tickets are to be auctioned off to highest bidders,  why would anyone devote her life for the party’s betterment?

Newbie millionaires, thugs, and criminals have hijacked major parties and their system.
A Nepali Congress cadre from Gorkha was elected chairperson of then-Village Development Committee (VDC) back in 1991 at 21. He was reelected in a landslide five years later. Many thought this young politician would someday go on to take up party leadership. He devoted himself to causes important to the local people, never leaving the village even during the height of the Maoist war. He was almost captured and killed during the war. Fast forward to local, provincial and federal elections in 2017. He was deemed “too poor” to run for the elections because he did not have enough money; he would not be able to win the financial race. That’s what his party bosses told him.

The politician from Gorkha is only one of countless anecdotes from both left and the right who dedicated their whole life for the party and the causes they championed, only to be left out in the cold during elections. The newbies who have amassed ungodly amounts of money in the past few years have been able to buy from top party leaders anything they want, from election tickets to mega project contracts. It is encouraging to see that at least 50 percent of the candidates contesting from NC, CPN-UML and Maoists are new faces. However, many of those candidates were handpicked by party bosses in Kathmandu, despite strong objection from party leadership in respective districts.

Similar is the story of women candidates. When a group of women leaders went to meet their party leader to increase the number of women standing for the First-past-the-post (FPTP) component, they were told to simply go away and that they were not capable of winning the grueling general election battles. Too often, women in our society suffer from the violence of low expectations. Of the 666 candidates for provincial and federal elections, only 36 women will be running, or just about 5 percent of the total candidates. This is a rude reminder of the nature of our leadership, no matter what the law or the constitution says. Remember that the constitution ensures 33 percent women representation in the parliament.

Then there are those who have had the fortune of being picked up for attractive jobs in the public sector, from ambassadorships to heads of agencies, only to resign in the last minute to run for elections. These extremely lucky ones will milk every opportunity on their way to the top, siphoning off opportunities from the next generation of young and bright party leaders. A long-time party cadre from some remote village in Rukum can do very little to fight against party leaders on ticket distribution. If someone dares such a showdown, he or she risks being marginalized from the party in his own home district.

Anecdotal evidence suggests some candidates spent above 10 million during the local elections. One wonders where the money came from and how it will be “repaid” both by the winners and losers. A recently elected village chairman from western Nepal says he has five million in debt! Can we honestly expect these politicians to take the moral high ground when it comes to governing? The vulgarity of the process that major parties have adopted and type of election expenses we are seeing make us question the long-term health and viability of our electoral system. If people with enough money can buy out tickets for the elections, why should anyone devote all his or her life to the party?

Our political parties have been hijacked by the newbie millionaires who made money in the first place by abusing authority, fully protected by politicians. Unfortunately, the epidemic of rapidly minting money has percolated to every fiber of our society. We have lost the patience, grit and honesty to work hard and to play by the rules. You make money, go to politicians, get your projects approved, pay them and threaten whoever dares question you and get nominated for elections! This vicious circle of thuggery to capture state resources and power is only getting worse.

There is an ongoing assault on our electoral process by the same leaders who designed the system. Our very first experience with the electoral system we devised is crashing right before us. The whole point of PR was to ensure that our parliament mirrors the diversity we celebrate as a country. But it has instead become a money-minting machine for major political parties’ top leadership. With rare exceptions, tickets go to the highest bidders.

We have to start a serious debate on campaign finance. The cost of running for Village Council chairperson has crossed three million rupees. Mayoral candidates in big cities like Kathmandu and Pokhara spent over ten million rupees. These numbers wildly cross the limit set by the Election Commission. Under current laws, FPTP candidates can spend up to 2.5 million rupees. But there is no donation limit for the candidates; they can raise as much money as they like.

Technically, donations upwards of 25,000 rupees must be disclosed. However, the Election Commission (EC) never questions documents submitted by parties and candidates. The EC can fine candidates and parties who fail to submit report all of 100 rupees! The commission has in fact become a rubber stamp for the parties, and has lost public faith due to the conduct of election commissioners, including their lavish spending on fancy cars.

More importantly, how the money floods the market during elections, and what impact this money has on lawmakers is a matter of serious debate. If this outrageous spending on election is to continue, how will party cadres toiling on the ground for decades garner financial means to run for higher office?

“The press should go after thugs in political parties, or else we will soon become irrelevant,” an influential policymaker from a major party was saying at a recent gathering in Kathmandu. The educated, the smart and the young are being pushed aside to make way for thugs, criminal convicts and newbie millionaires within political parties.

What can we, the citizens, do? Well, when it comes to voting in elections, we have always had mood swings. We are willing to test out new ideas, people and movements. If that doesn’t work, we then revert to the status quo. The choice before us in the upcoming elections is clear: will we validate corrupt thugs who have illegally amassed millions or will we gather the courage to elect leaders who have been quietly working in remote villages for decades? Further, our choice in this election will send a clear signal as to the kind of system we are willing to build for the next generation of Nepalis.

A Letter to the Nepali People about MCC

Nowadays, some sections of the public go as far as to charge treason against those who argue the MCC project... Read More...

Our ability to enjoy life and live well is based on our physical and mental health. As a result, scheduling... Read More...

Developing nations' plea to world's wealthy at U.N.: stop vaccine hoarding
27 minutes ago
Afghanistan and the United Nations
1 hour ago