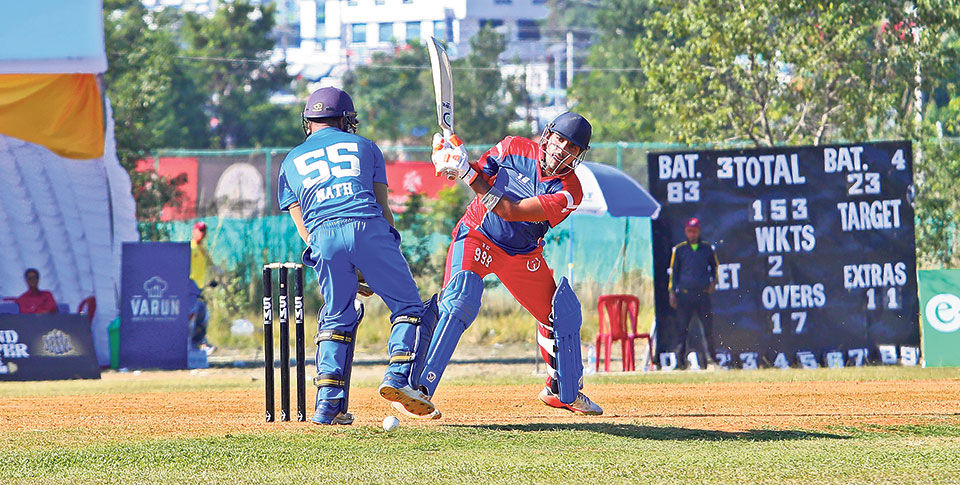 POKHARA, Oct 28: Hulas Kathmandu Royals’ Indian recruit Gaurav Tomar, an Uttar-Pradesh batsman, smashed 10 sixes in his innings of 95 runs in a 17-run win against Expert Dhangadhi Blues in the second match of the day two of Pokhara Premier League in Pokhara Cricket Ground, Pokhara, on Saturday.

Tomar’s 10 sixes in a match is record in Nepal’s domestic franchise T20 cricket.

Apart from 10 sixes Tomar, the right-handed batsman, hit four boundaries as he faced 44 deliveries. In the Tomar-propelled innings, Royals scored 180 in 20 overs for the loss of three wickets. In reply, Blues was limited to 163 runs for the loss of eight wickets as Royals registered its first win of the league.

Veteran bowler Basant Regmi, Susan Bhari and pace bowler Amar Routela picked up two wickets each to limit Blues. The English batsmen, Dan Lawrence and Peter Trego were dismissed for eight and 19 runs respectively as Bhari claimed both wickets outfoxing them with turn and bounce. The Somerset batsman Trego smashed three boundaries in his 17-ball stay whereas Essex batsman Lawrence could only face nine deliveries with a four.

Blues captain Dipendta Singh Airee scored a valiant half-century during the chase but his wicket in penultimate pulled down the curtains on improbable chase as Regmi outfoxed him clean-bowled. Airee smashed three boundaries and sixes each in his four-ball stay.

Earlier, Naresh Budhayer smashed unbeaten 36 runs from 24 balls including two fours and two sixes to aid Tomar’s 95 to push the total to beyond Blues’ reach in the match.

Tomar was adjudged man of the match. Royals faces Biratnagar Titans in the next match on Monday whereas Blues will tussle with same team on Sunday. Royals has a rest day on Sunday.

Player of the match Kami removed Anil Kumar Sah, Paras Khadka, Aarif Sheikh and Smit Patel to pick up four wickets in his first three overs defending the total of 135.

Rhinos never recovered from the setbacks as was bundled out for 65 runs. Bhuvan Karki who batted at number 10 was the top scorer with 19 runs whereas batsmen SonuTamang, Sah and Aarif were dismissed for ducks.

Earlier, Blasters was reduced to 10 runs for three wickets in 4.3 overs. The winning team lost both the overseas recruits Mustafa and Chirag Suri, from UAE, for a duck and a run respectively.

A 68-run partnership between Sagar Pun and Shankar Rana put things back on track for Blasters. Both scored 46 and 48 runs respectively in 48 and 41 deliveries.

Karan KC was pick of the bowlers for bagging two foreign wickets to his name. Ram Naresh Giri and veteran Shakti Gauchan picked a wicket each.

Winning captain Kami claimed that he trusted his bowling unit to defend a low score and was happy that it was executed well during the match. “We always believed we can defend a low score. It was good condition for bowling utilized well by both sides,” said Kami.

Blasters will face Pokhara Paltan on Sunday whereas Rhinos will face same team on Monday. Rhinos has a rest day on Sunday.