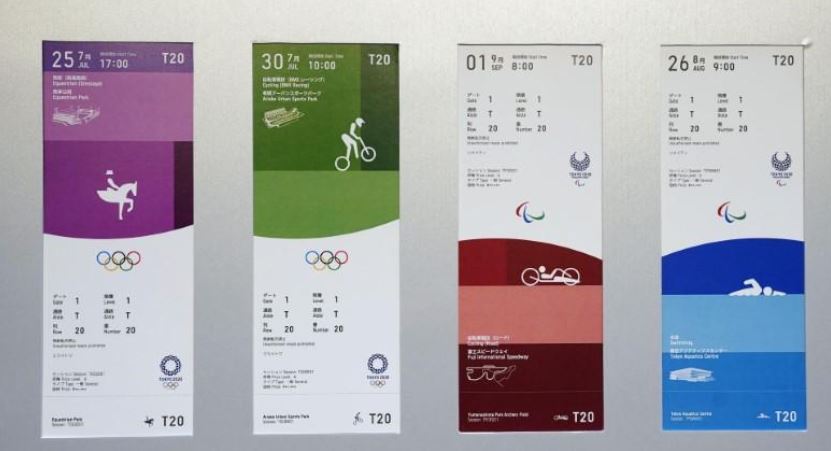 The ticket designs for the 2020 Tokyo Olympics and Paralympics are seen displayed for the media for a photo opportunity in Tokyo, Japan, January 15, 2020, in this photo taken by Kyodo. Mandatory credit Kyodo/via REUTERS ATTENTION EDITORS - THIS IMAGE WAS PROVIDED BY A THIRD PARTY. MANDATORY CREDIT. JAPAN OUT. NO COMMERCIAL OR EDITORIAL SALES IN JAPAN.

TOKYO, Jan 15: The ticket designs for the Tokyo 2020 Games were unveiled by Japanese para-canoeist Monika Seryu on Wednesday as the second wave of ticket sales for the Paralympics began.

Organisers said the simple ticket designs, which feature the pictograms of each individual event and come in one of four colours, are inspired by the creation of fabrics for kimono, Japanese traditional formal wear.

The colours – red, blue, purple and green – represent each of Japan’s four seasons.

Tickets for the Olympics have been on sale since May 2019 and organisers said on Wednesday that 4.48 million had been sold so far.

Organisers are still unclear on how many tickets are available but in Tokyo 2020’s bid to host the Olympics, they detailed that 7.8 million would be available.

Tickets for the Paralympics are also a hot commodity for Japanese sports fans and the second wave of domestic sales for those events began on Wednesday.

American silver medalist para-archer Matt Stutzman was in Tokyo to rally even more support for the Paralympics.

“I think that the spectators are going to come and watch archery and watch basically the impossible,” said Stutzman, who won silver at London 2012.

“That is people with physical disabilities like myself, me without any arms, performing at the highest level of competition.”

Voters unhappy that martyrs family were not given tickets