To trek or not to trek 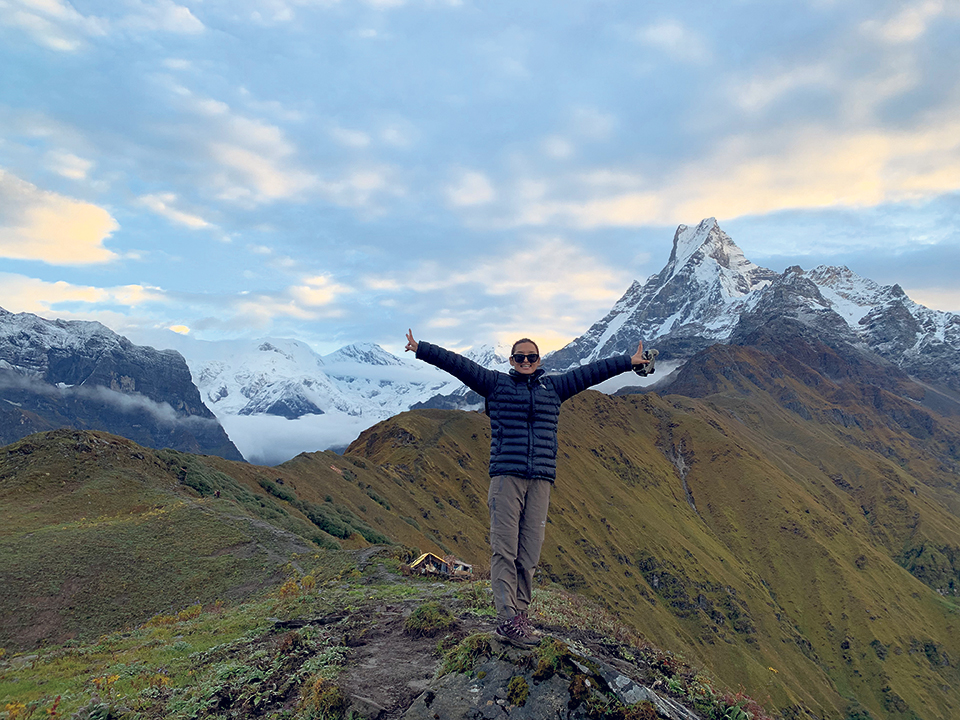 Will to walk
The lure of the wilderness and the mountains is never as strong as it is during this time of the year when someone we know is definitely out there trekking and posting pictures of it on social media. Next year, we promise ourselves. But something or the other holds us back: We’ve never gone on a week-long trek before or we don’t think we will be able to survive without city-life facilities. Urza Acharya talks to some people who have made it to Annapurna Base Camp or stood next to the shimmering Rara Lake to find out just what it takes.

For so many of us it’s been another year of wistful longing as our Facebook and Instagram feed explode with pictures of our friends in front of massive mountains. Dashain-Tihar has always been a time when tourists come to Nepal to go trekking in the wilderness and see the mountains up close. In the past couple of years, Nepalis too seem to favor this over going abroad during the annual holiday season.

As enthralled as we might be about trekking up to the mountains, we often keep deferring such a trip because of all the logistics and elaborate planning that’s required.

Chering Paljor Sherpa, guide and hotelier based in Khumbu, a region northeast of Mount Everest, says that your trekking experience will largely depend on the kind of service you opt for. According to him, the toughest part is to figure out what kind of service works best for you. After that, it’s a piece of cake. Well, not really, but it does make things a whole lot easier.

“In case of people trekking to Sagarmatha Base Camp or Gokyo, if you have taken a fixed package, accommodation and food will all be managed by the guide and you can just focus on reaching your destination,” says Sherpa adding that there are other packages that may require travelers to manage food and accommodations themselves. Similarly, if you are traveling without a guide, you have to do everything yourself.

Dr Kamal Kandel, medical officer based in Pokhara, has been to Annapurna Base Camp, Mardi, Poon Hill, and Rara among various other places. He believes you have to plan your finances properly if you want to go trekking in some of the most popular routes of the country as services along the way can be a tad bit pricey.

“Managing your finances before and while traveling play an important role in making your travel worthwhile,” he says. So, be it saving as little as a thousand rupees from your allowance or choosing to not splurge on fancy clothes or eat out, you have to sacrifice momentary pleasures in order to set aside some money to make that trip to Gosaikunda.

Dr Kandel further adds that managing your finances during your trip is also crucial. “As food makes for the largest part of your spending, choose light and healthy food that will help you walk rather than spending money on heavy and greasy stuff that will make you lethargic,” he says. Moreover, carrying a water bottle, chocolates, and snacks can help you cut down on extra costs.

When Aastha Baniya, a second-year BBA student at Little Angels College, traveled to Mardi at the end of September this year with her friends, she found that it was very important to negotiate with the hoteliers regarding the charges for food and lodging.

“During our four-day long trek, there was time when we rented a hotel room for one night for Rs 1100. But the next morning, when we were about to leave, we were given a bill for Rs 1700. That was our first trekking trip and we were hesitant to bargain and negotiate. But we have now realized that if you don’t haggle, you will be taken for a ride,” she says.

Unlike foreigners, Nepalis don’t need permits to go on various treks and though that can help cut costs, if you aren’t vigilant your budget can easily go out of whack. A trip to Mardi is a lot cheaper than a trip to, say, Annapurna Circuit or the Everest Base Camp, the cost of which is estimated to be about Rs 80,000 to Rs 100,000. This includes a guide whom you have to pay around Rs 4000 a day. If you want a porter to carry your luggage, that will cost you extra.

“The only thing that changes significantly everywhere you go as you go higher up in your trek is the price of water,” says Baniya adding that, at the highest camp, she had to pay as much as Rs 150 for a single cup of hot water. Moreover, a bucket of hot water for bathing may cost you up to Rs 400. She also recommends carrying one’s own hygiene products like toilet paper and soaps. You never know where you might not find any, she says.

According to Baniya, her estimated budget for a four-day trip to Mardi was around Rs 10,000. However, thanks to a little negotiation and some compromises, they were able to complete the trip comfortably at just Rs 7200.

Baniya also says that she has learnt the hard way the importance of asking for advice--from people who have already traveled to the place you are going to, to get a sense of how things work there.

According to Baniya, the walk to the Mardi Himal Base Camp starts at three in the morning. However, as it was her first time trekking, she did not have a headlight with her. “The route which we had to use that day was pitch black, slippery from the rain, and it was considered the riskiest part of the entire trek,” she says. And so, she had to take help of another team who had headlights to complete the remainder of the trip.

“We were lucky. But that might not always be the case so one has to be adequately prepared,” she says.

Sherpa adds that it’s thus important to have proper knowledge about the place that you are traveling to (especially if it’s in the mountainous regions). ‘If you are traveling without a guide, there is a chance that you might take a different route and get lost. And as Himalayan routes are very tricky, it’s extremely difficult to locate a person who gets lost,” he explains.

What’s also important, he says, is to carry gear that is specific to a certain terrain. For instance, he says, if you are traveling up the mountain regions hiking boots with proper grips, windcheaters, headlamps, water purifiers, etc. are of paramount importance. Furthermore, Kandel, from a doctor’s perspective, adds that basic first aid supplies like antiseptics, antidiarrheal drugs and acetazolamide (to combat altitude sickness) are a must.

“It’s important to be prepared for emergencies,” he says. Kandel also points out that acclimatization to high altitude is something a lot of people don’t pay proper heed to, especially if they are trekking high up for the first time. “Many of us are not aware of the adverse effect of climbing too high too fast,” he says.

According to an article published by Princeton University, you can climb more than 305 meters in a day as long as you come back down and sleep at a lower altitude. Otherwise, it’s advised to stop at the 300-meter mark. If a person begins to show symptoms of moderate altitude illness, they shouldn’t go any higher until the symptoms fade and if in case the symptoms get worse, one should descend immediately.

“Making sure you are hydrated and taking it slow are the best ways to combat altitude sickness,” adds Dr Kandel.

Most years, the climbing season starts from mid-September and lasts until mid-December. The main reason for this is that during these months, there is more visibility and you are thus more likely to see mountains in all their glory. Similarly, the weather is considered ideal for trekking. It is usually clear with warm days and cold nights.

“As the influx of travelers in the Sagarmatha region tends to be high during the climbing season, it might be difficult to find accommodation,” says Sherpa.

There are limited hotels in most trekking routes and at popular trekking routes, during peak season, one has to either reach earlier than most travelers or call in advance to book a room for the night. Otherwise, you might have to sleep out in the open in your sleeping bag.

“Don’t let stories of challenges and hurdles deter you from packing your backpack and embarking on a trek. One thing is for sure, every trek is an adventure of a lifetime,” concludes Kandel.

Tourist swept away by river

KASKI, Sept 16: A tourist trekking in the Annapurna area has gone missing after being swept away by a river. Read More...