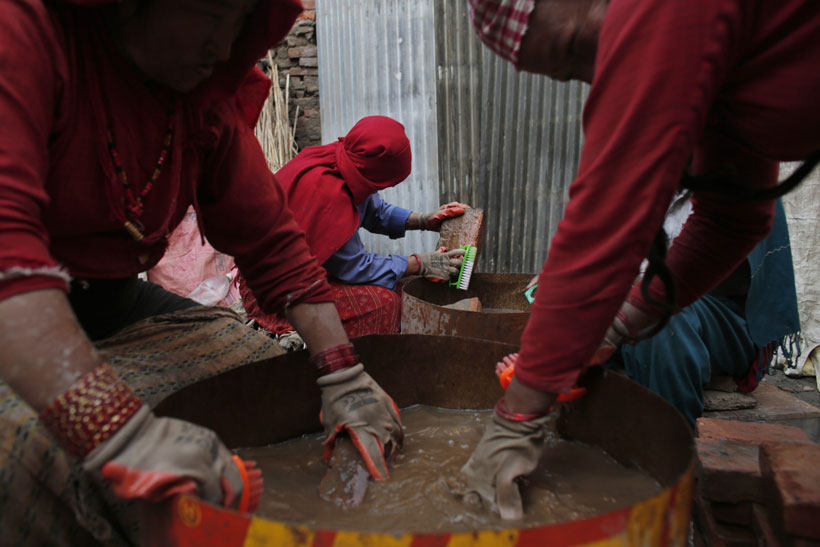 Nepalese women scrub mud off bricks, salvaged from a house damaged by the 2015 earthquake, to use them in reconstruction in Bhaktapur, Nepal, Wednesday, Jan. 4, 2017. (AP)

KATHMANDU, Jan 7: People who lost their homes in the devastating earthquake that hit Nepal nearly two years ago are tired of waiting for help to rebuild.

The slow pace of distributing government grant money for rebuilding has left many people to spend their second winter without a home.

Nhuchhe Laxmi Prajapati and Shiva Prajapati, who are not related, are building their houses now, by taking out loans with high interest rates.

Their homes and hundreds of others were damaged during the April 25, 2015, earthquake in the town of Bhaktapur, which is known for brick paved roads, old palaces and artistic Hindu temples. It's just 13 kilometers (8 miles) west of the capital, Kathmandu.

When the earthquake shook the house of Shiva Prajapati, 12 family members were buried by the falling bricks. Three died and six of the survivors had serious injuries.

He waited for months for help but finally took out a $30,000 loan from the bank at 12 percent interest rate and began constructing a house for the family at the same spot where their old house once stood.

"We hear that the government has spent millions and billions for reconstruction but I have not received any money. The government has done nothing," Shiva Prajapati said as he was digging the foundation for the house.

In a nearby neighborhood, Nhuchhe Laxmi Prajapati, 61, was also digging the foundation with the help of family members. She too took out a loan of $10,000 from a local money lender. She has no clue how much the interest is or how she is even going to pay back.

"I just got tired of living in the sheds in the field. It is just too cold there," she said.

The government has been repeatedly criticized for the slow work helping earthquake victims.

The National Reconstruction Authority has said it has distributed the first installment of government grant money — about $500 to 450,000 families — but it is still collecting details from residents in several districts where the earthquake caused damage.

Prime Minister Pushpa Kamal Dahal has asked the authority to explain the delays.

LAMJUNG, Dec 26: There are around two dozen tin-roofed huts on the banks of Chepe River that divide Lamjung and Gorkha.... Read More...

MELAMCHI, Dec 9: With the winter nearing its peak, the survivors of the Gorkha Earthquake in Melamchi of Sindhupalchowk are... Read More...