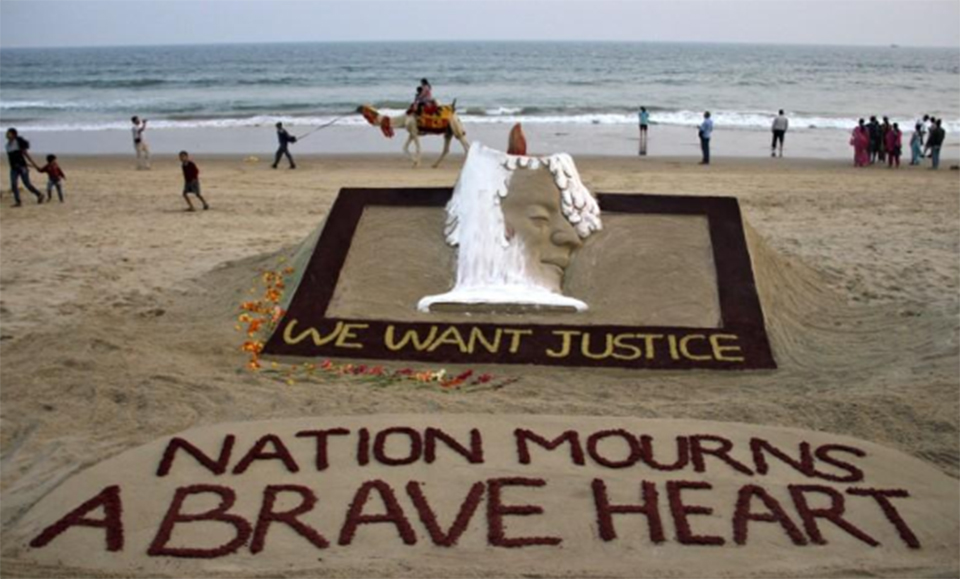 FILE PHOTO: People walk near a sand sculpture with the words "We Want Justice" created by Indian sand artist Sudarshan Patnaik, in solidarity with a gang rape victim who was assaulted in New Delhi, on a beach in the eastern Indian state of Odisha December 29, 2012. A woman whose gang rape provoked protests and a rare national debate about violence against women in India died from her injuries on Saturday, prompting promises of action from government that has struggled to respond to public outrage. REUTERS/Stringer

MUMBAI, March 20: India executed four men on Friday convicted for the gang rape and murder of a woman on a New Delhi bus in December 2012, in a case that shamed and outraged a nation with one of the world’s worst records for crimes against women.

Here is a timeline of the case:

Dec. 16, 2012 - A 23-year-old physiotherapy student was brutally raped on a moving bus in the Indian capital of New Delhi. She and her male companion were tortured. A metal pipe was pushed into her abdomen, and a large section of her intestine was pulled out. She was thrown on the roadside and left for dead. Five men and a juvenile were arrested for the crime. Shocked by the brutality of the crime, large crowds gather for candlelit vigils in cities throughout the country, expressing their outrage and praying for the victim as she clung to life.

Dec. 29, 2012 - The victim dies in a hospital in Singapore after battling serious internal injuries. Protests erupt across India, calling out government indifference, gaps in law-enforcement and rising sexual crimes against women.

Jan. 17 2013 - A fast-track court begins proceedings against the five men and one juvenile in the case.

March 11, 2013 - Ram Singh, one of the main accused in the case and the driver of the bus, is found hanging in his prison cell.

April 2, 2013 - A tough new anti-rape law is passed, making stalking a crime and introducing the death sentence for convicted rapists.

September 2013 - The fast-track court sentences all four adult men to death in the case. The juvenile accused is remanded to a three-year term in a detention centre and is released in 2015, after serving his term.

NEW DELHI, March 20: India hanged four men on Friday who were convicted for the rape and murder of a... Read More...