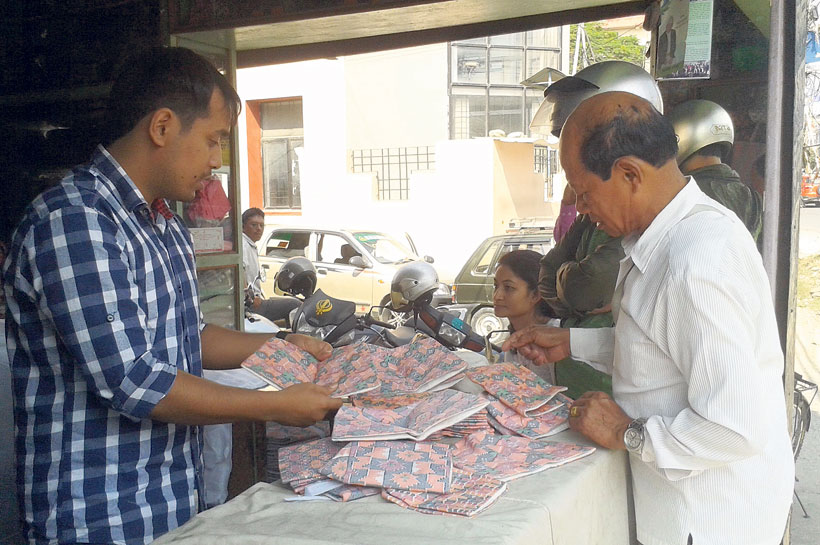 A shopkeeper (L) selling Dhakatopi at the Mahendra Bridge in Pokhara on Tuesday. ( Republica)

POKHARA, Oct 26: With the arrival of Tihar, sale of a traditional cap, popularly known as Dhakatopi in Pokhara is in rise.

Though Dhakatopi is not much popular among youths during other times, the demand goes very high in Tihar, according to salespersons.

“Youngsters who usually snigger at the prospect of get fond of Dhakatopi during Tihar, the festival of lights,” says Rajeshman Palikhe, local businessman.  “This fashion has resulted in an unprecedented boost in the sale of Dhakatopis, we are making good money these days,” he added.

According to Palikhe, people used to buy only marigold and globe amaranth garlands for Tihar in the past. But now they love to gift Dhakatopis in Bhai Tika.

There is different price range for Dhakatopis in Pokhara market ranging from Rs 35 to Rs 5,500.
According to Palikhe, people commonly go for Rs 500-1000 range during Dashain festival while they are ready to pay higher prices in Tihar. “Those who can afford do not mind paying even Rs 5,500. That is the highest price of cap available here, he said adding that quality is however the common concern of customers.

Palikhe's family is pioneer in Dhakatopi business sin Pokhara. The family had opened a dakatopi manufacturing unit in Pokhara in 1976 and started selling the products from 1983. Other locals who started similar businesses with them could not sustain and had to close soon after.
“It's my family business. Many had tried to come in this business after us but few could survive. We too faced several challenges, however, things are going on pretty well so far,” Palikhe said.

He further said that the business sees unexpected low at times. However, during festivals, it often recovers. “We desperately wait the festivals like Dashai and Tihar, or even the wedding seasons. We have brisk business during such times,” Palikhe said.

According to Palikhe, business of Dhakatopi is sustained also due to its 'patriotic value'. As many still love to consider it as national attire, sale of the cap goes on, he said.

During wedding seasons, single family buys around 200 to 300 Dhakatopi, according to Palikhe.  However, interestingly, people buy the cheapest caps for wedding purpose, he informed.

There is a huge demand for dakatopis manufactured from Palpa, Dharan and Tehrathum. Some even import daka materials to Pokhara for self manufacturing.

The business side of Tihar

Contrary to popular belief, small business owners don’t make all that much during these festive times. Business does pick up... Read More...

Candidates hurry up for poll nomination immediately after Tihar

KHOTANG, Oct 23: As the Election Commission (EC) had set October 22, the day after Bhaitika, as the date for filing... Read More...