TIA to be closed until noon 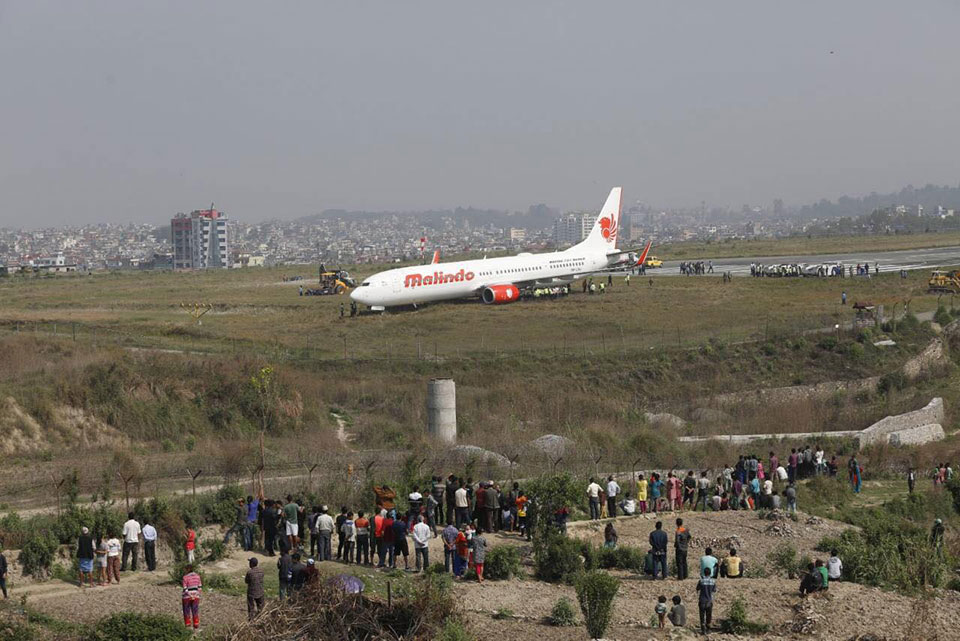 KATHMANDU, April 20:  All international flights are delayed untill noon as Malindo Boeing 737-900 Extended Range Aircraft skids off the runaway which was about to take off from Tribhuvan International Airport (TIA), Kathmandu to Kualalumpur, Malaysia on Thursday night.

"The Aircraft skidded off a runway some 100 feets south and stopped along a grassy area of runaway side after its nose wheel could not keep to the runway," said Premnath Thakur, Director of Airport Operation, TIA.  All 139 passengers are safe.

“As the Aircraft could not be removed from the runway, the country’s only international airport is closed since Thursday night and it will still be taking two-three hours more,” added Thakur.

“The airport was closed the whole night which has affected around 11 international flights landing and taking off from the airport,” said Sanjeeb Gautam, Director General of Civil Aviation Authority of Nepal (CAAN).

Gautam further added, "We are working to take off the Aircraft from yesterday night itself with equipments that we have. We are expecting to complete the operation soon, however if we do not succeed, we will be calling the recovery team from Malaysia.”

Gautam also added that “The Aircraft skidded off without any damage. We do not want any damages thus we are pulling it carefully.”

On 4th March 2015 TIA was shut down for four days after a Turkish Airbus A330 slipped off its runway ending all the operations.

KATHMANDU, Nov 2: The Tribhuvan International Airport, the only international airport of Nepal, is set to be closed for 45... Read More...

Division or dialogue with China?
10 hours ago