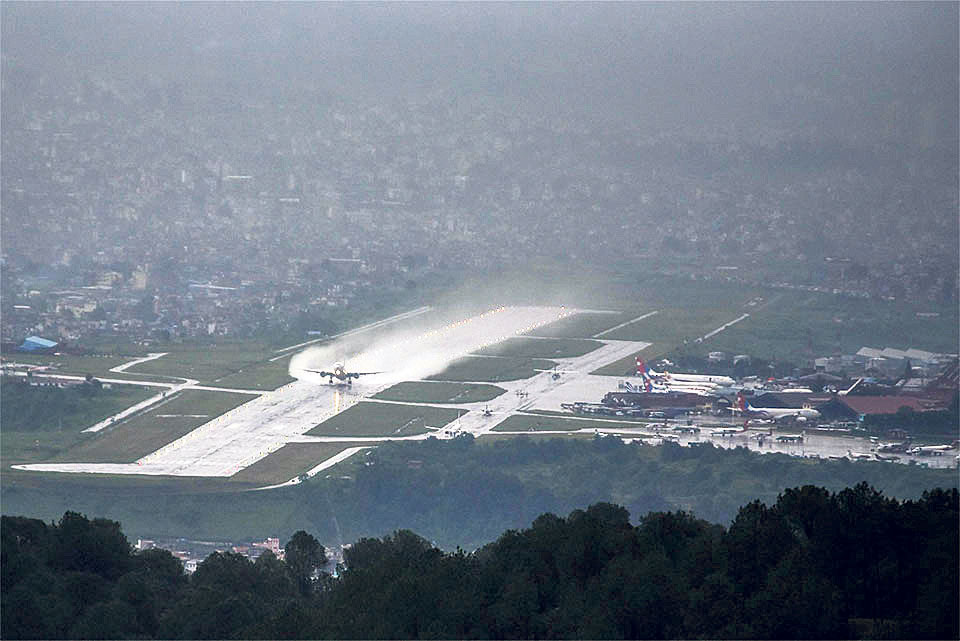 KATHMANDU, Dec 29: The rehabilitation of Tribhuvan International Airport (TIA)'s runway has been completed 128 days ahead of the stipulated deadline.

China National Aero-Technology International Engineering Corporation (AVIC-ENG), a state-owned enterprise of China, handed over the runway and taxiway of TIA to the Civil Aviation Authority of Nepal (CAAN) amidst a ceremony in Kathmandu on Saturday. The handing over certificate was signed by Wang Jianxin, project manager of Rehabilitation of Runway and Taxiways; Kyu Choel Choi, team leader of Yooshin Consultant; Engineer Murari Bhandari, project director from CAAN; and Devendra KC, general manager of TIA.

The rehabilitation of the runway started April 1 this year and was completed on June 30. The firm was awarded the project a year ago as it was the lowest bidder amongst the four companies shortlisted for the award of the project. The Rs 3.75 billion project was signed with the contractor for blacktopping of the runway.

Speaking at the handover ceremony, Minister for Culture, Tourism and Civil Aviation Yogesh Bhattarai said the rehabilitation of the airport will be instrumental for the upcoming Visit Nepal Year 2020. “The completion of the work has strengthened relation between the two countries,” he said, “I hope the construction of the two under-construction international airports will be completed within the stipulated timeframe.”

Similarly, Rajan Pokhrel, director general of CAAN, stated that the situation of the airport was so bad that aircraft had to be put on hold for a long time or had to be diverted to airports like Lucknow. “There are many such instances in our country where we have bad experiences with construction companies. But this time, the contractor company has completed the project almost five months ahead of the stipulated time despite challenges like active runway,” he added.

The airport authorities had taken the maintenance initiative following the pressure regarding safety of air travelers because of the potholes and cracks in the TIA's sole runway.

“Successful completion of such important projects benefits Nepal by improving air connectivity with other countries,” said Hou Yanqi, Chinese ambassador for Nepal. “It will also contribute to improve the tourism industry; the improvement of the airport can accommodate more tourists and attract more travelers into the country and improve travel experience.” She said with the improved transportation and infrastructure development, the country will become popular amongst Chinese tourists.

During the renovation, the airport remained open from 8am to 10pm daily. The maintenance works took place from 10pm to 8am every day. For the rehabilitation, the pitch that had cracks and potholes on its surface was removed and the runway was blacktopped from the scratch.

TIA to remain closed for half hour from 3.10 pm today for rehearsal of emergency plan

KATHMANDU, June 26: Country's sole international airport will be closed for 30 minutes this afternoon for a rehearsal of the... Read More...