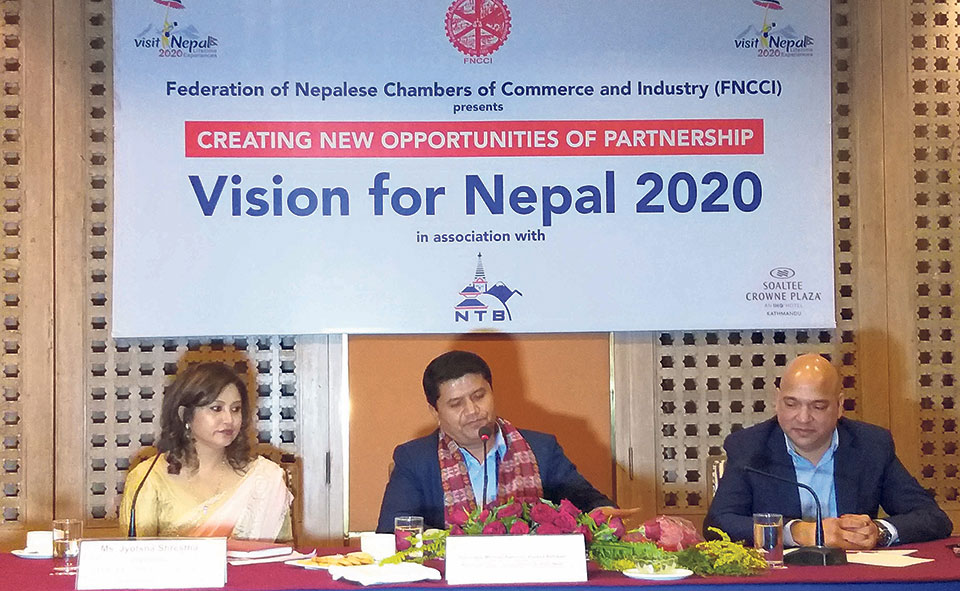 “The TIA runway rehabilitation project will be completed within four months. Then we will work to bring the airport into operation round the clock,” Adhikari said, speaking at ‘Vision for Nepal 2020’ program organized by Federation of Nepalese Chambers of Commerce and Industry (FNCCI) in Kathmandu on Tuesday.  He also claimed that GBIA will start operation before 2020, providing foreign tourists one more gateway to enter Nepal.

Stating that Visit Nepal Year 2020 is a short-term planning for tourism industry, Minister Adhikari said that 2020-2030 decade will be a tourism development decade for country’s sustainable prosperity. “As the government’s participation in tourism sector has remained passive in terms of both action and investment since the very beginning of tourism in Nepal, private sector has been making all the efforts to bring tourists to the country. The government will be playing a supportive role by creating policies and making environment conducive for the industry,” he added.

Travel trade entrepreneurs attending the program suggested the minister to bring innovative programs and create friendly policies for the country sector. They also said that the government should clear confusion over the authority to govern tourism at federal, provincial and local levels.

Speaking at the program former president of Nepal Mountaineering Association (NMA), Ang Tshering Sherpa, said that the federal system has created conflict in exercise of power. “This conflict should be resolved at the earliest for the tourism industry to prosper,” he added.

Meanwhile, Tika Ram Gurung, secretary of NMA, requested the minister to promote Nepal as adventurous and mountaineering destination, by encouraging adventure-seekers to climb virgin mountains of Nepal. Likewise, Ramesh Thapa, secretary general of Nepal Association of Tour & Travel Agents (NATTA), suggested promoting major tourists destinations of all seven provinces. “Private sector is taking the leadership in tourism development and promotion. We only want the government to take care of infrastructure development,” he added.

Likewise, Binayak Shah, general secretary of Hotel Association Nepal (HAN) asked the minister to allocate work responsibility among tourism entrepreneurs for the Visit Nepal Year 2020 campaign. “Focus should be given on connectivity to bring more tourists to the country,” he added.

KATHMANDU, Dec 29: The rehabilitation of Tribhuvan International Airport (TIA)'s runway has been completed 128 days ahead of the stipulated... Read More...

Flights affected at TIA due to bad weather

KATHMANDU, May 3: Domestic flights taking place from the Tribhuvan International Airport were suspended today due to adverse weather. Some... Read More...