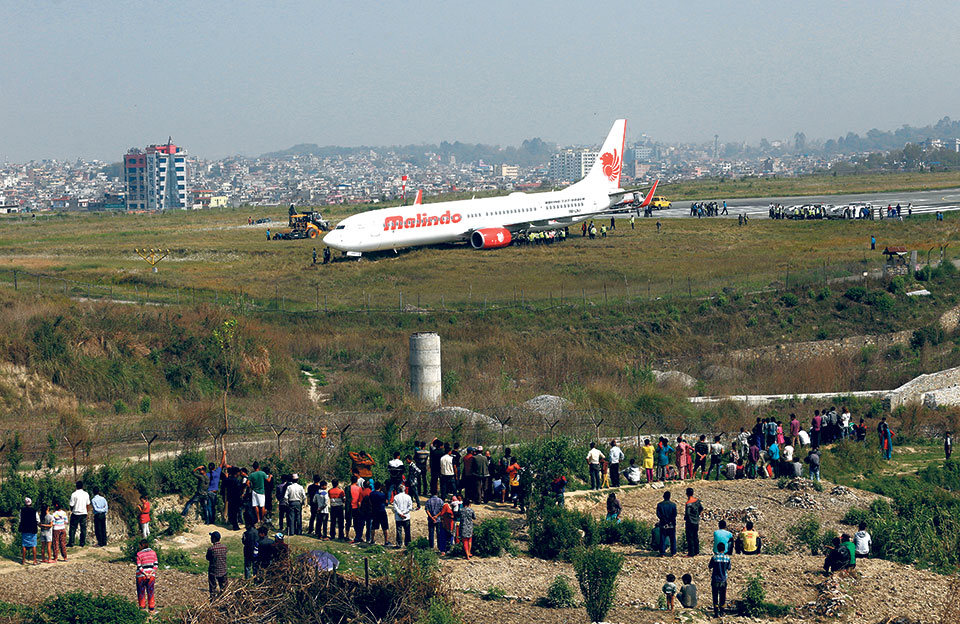 People gather at Palpakot, Koteshwar, to watch a ground-handling crew work on a grounded Malindo Air Boeing 737-900 aircraft at Tribhuvan International Airport (TIA), Kathmandu, on Friday morning. The aircraft skidded 40 meters from the southern end of the runway after the pilots of flight OD-181 aborted a take-off at around 22:15 hours on Thursday. Dipesh Shrestha/Republica

KATHMANDU, April 21: Tribhuvan International Airport (TIA) remained closed for almost 13 hours from Thursday night to Friday morning after the aircraft of Malindo Air skidded off the runway while trying to take off.

The Boeing 737-900 series aircraft was about to take off from the TIA to Kuala Lumpur, Malaysia, on Thursday evening when the pilot found some technical error on the aircraft. As he could not control the plane since it was already on take-off mode, he abandoned take-off and the aircraft stopped at a grassland around 40 meters away from runway 02 towards the southern part of the runway.

The flight, numbered OD-181, was carrying 139 persons on board including passengers and crew members. The TIA has confirmed that the accident had occurred without causing any injuries to the people on board.

Soon after the aircraft came to a stop on the grassy area outside the runway, its passengers disembarked and were taken to hotels in Kathmandu, said the TIA. The incident occurred at 10:15 pm on Thursday, and since then the airport halted all flight operations till 11:35 am on Friday.
After removing the aircraft from the grass at 10:45 am Friday, airport authorities took it to the eastern part of the airport to clear the runway.

Several flights scheduled to fly on Friday morning from TIA to other destinations were affected and delayed. Three flights of Nepal Airlines Corporation, three flights of Himalayan Airlines, one flight of Oman Air and one flight of Qatar Airways were delayed and rescheduled, according to Prem Nath Thakur, spokesperson for TIA.

Raj Kumar Chhetri, general manager of TIA, said a team of Malindo Air, including air engineers, will be coming to Nepal for inspection of the technical problem of the aircraft.

“We have already had conversation with the airlines company,” Chhetri said. “They have said that they will try to fix the aircraft within two days.”

Regarding clearing the runway at night, Chhetri clarified: “We do have equipment and lighting facilities, but to work at night is a bit more difficult than to work during the day.” He further said rain during the night made the work difficult for the ground handling team.

The Minister for Culture, Tourism and Civil Aviation Rabindra Adhikari inspected the accident site early Friday morning. He directed the TIA, Civil Aviation Authority of Nepal (CAAN) and other authorities to investigate into the incident immediately and ensure that such incidents do not happen in the coming days.

On March 12, the airport halted operations for almost three hours when a US-Bangla Air aircraft crashed on runway killing 51 people on board.

KATHMANDU, Nov 2: The Tribhuvan International Airport, the only international airport of Nepal, is set to be closed for 45... Read More...