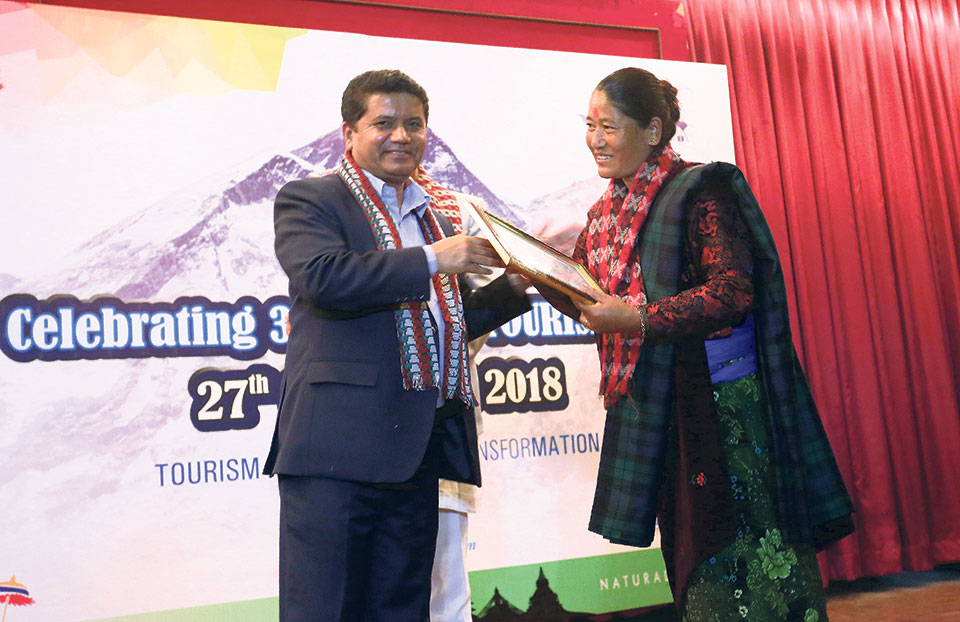 Minister for Culture, Tourism and Civil Aviation, Rabindra Adhikari, awarded Murma village of Mugu, Doramba of Ramchhap and Rainaskot of Lamjung with 'Best Village Destination for Tourists' honor to the three villages at a program organized in Kathmandu on Thursday to celebrate 39th World Tourism Day.

World Tourism Day was celebrated across the country on Thursday with the theme 'Tourism and Digital Transformation'. Ministry of Culture, Tourism and Civil Aviation, Nepal Tourism Board (NTB) and different travel trade associations teamed up to celebrate the day by organizing different programs and activities.

On the occasion, Minister Adhikari also awarded cash prize of Rs 100,000 and a letter of appreciation to Uddhab Raj Rimal who designed logo for the Visit Nepal Year 2020 campaign.

Speaking at the program organized in Kathmandu, Deepak Raj Joshi, CEO of NTB, said that the tourism industry all over the world was embracing digitization. "Digital transformation is not all about economic and social upgradation. A concept of no national security without cyber security is emerging,” he said, adding that the changing trend toward digitization is giving a boost to the tourism sector. He also urged all stakeholders to enhance themselves digitally, adding that NTB was providing digital marketing training to 20 different districts of the country.

KATHMANDU, Sept 28: Coinciding with the 39th World Tourism Day, Himalaya Expeditions -- the organizer of Tenzing Hillary Everest Marathon and Lumbini PEACE Marathon -- has launched two new marathons with the objective of promoting tourism through adventure sports. The first one is Pokhara Mountain Marathon, which will begin from Dhampus, connecting five Kots (forts) of Kaski before ending at Sarangkot. Similarly, Kathmandu Mountain Marathon will connect old Newar settlements of Kathmandu and Lalitpur. The marathon which will start from Chobhar will conclude in Godavari.

Similarly, Lumbini Peace Marathon Award was given to Shabbir Khan of Rupandehi, who has been protecting seeds of the old Bodhi tree, which was chopped down from the Mayadevi Temple premises, by producing saplings through tissue culture.

Speaking at the program, Bikram Pandey KAAJI, chairman of Himalaya Expeditions, said tourism will not be sustainable if local people are not benefiting. "That is why I always make sure that local people get some benefits from our programs and activities," he added.

Likewise, Deputy Prime Minister Shrestha said: "We all want to be like Buddha, but none of us is ready to give up material life like Prince Siddhartha. I am repeatedly raised this matter in the meetings of senior political leaders of the country."

On the occasion, a portal for promotion of Buddhist tourism -- www.buddhistcircuits.com -- was also launched.

GORKHA, July 1: Some villages in Gorkha are reeling under acute shortage of food, though there is plenty of rice... Read More...