Three Star to compete in Bordoloi Trophy in Guwahati 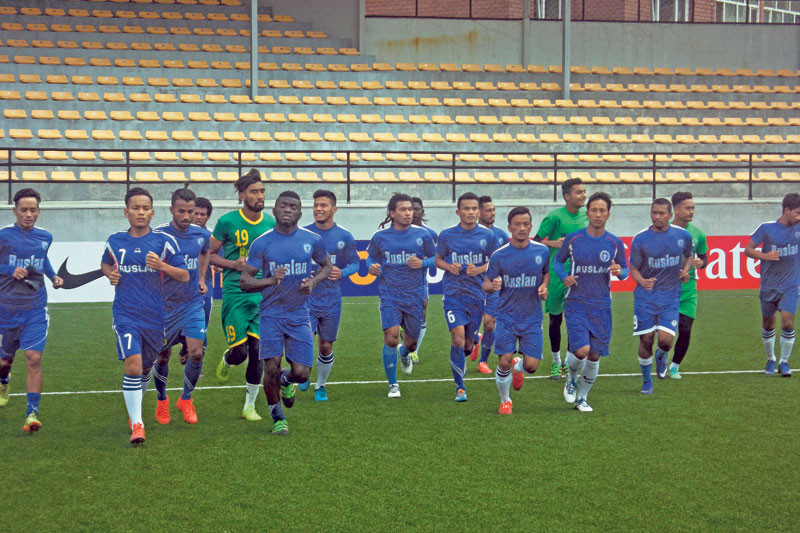 The Lalitpur-based club, which is participating in the 64-year-old tournament for the second occasion, had reached to the final in 2010.

The tournament that is organized by Guwahati FC will see eight participants from India, Nepal and Bangladesh vying for the title and a cash prize of IRs two million at Nehru Stadium.

Three Star, that qualified for the AFC Cup play-off last month, has been drawn in the group A along with I league outfit Shillong Lajong, Flamingo FC of Nagaland and Oil India FC of Assam.

Three Star has been training for the Bordoloi Trophy since 15 days after returning from the Mongolia according to the head coach Megh Raj KC.

“We are preparing for the tournament after returning from the AFC Cup play-off qualifiers with the target of winning it,” said KC.

Three Star has added two new Nigerian players in the squad according to the KC.

“We are adding two new players in the central midfield and attack to strengthen the squad,” informed KC. Besides the two new additions Three Star will be studded by the team that played in Mongolia.

Three Star will kick off the tournament on September 19 facing Flamingo FC and will lock horns with Oil India FC and Shillong Lajong on 23 and 25 September respectively at Nehru Stadium.

Three Star will leave for Guwahati on September 16.

Three Star to compete in Guwahati

KATHMANDU, Sept 26: Ruslan Three Star Club has booked its place in the semifinals of the Bordoloi Trophy in Guwahati, Assam... Read More...