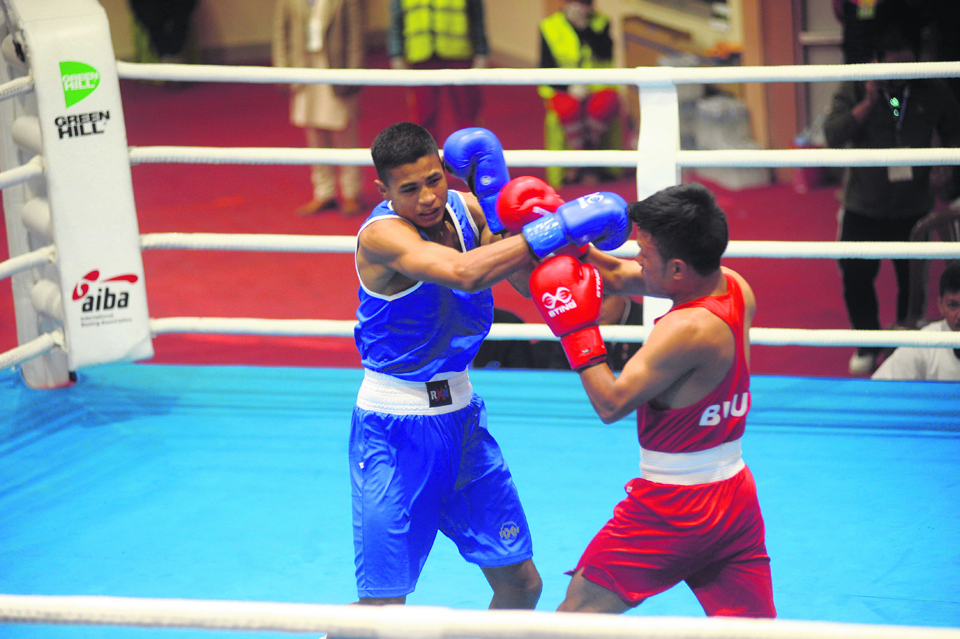 Nepal’s Sanil Shahi (left) in action against Butan’s Nima Dorji during the men’s light 60 kg event of the boxing competition at the 13th South Asian Games in Satdobato, Lalitpur on Friday. Keshab Thoker/Republica

LALITPUR, Dec 7: Sushil Thapa Magar, Sanil Shahi and Bhupendra Thapa advanced into the semifinals of the boxing competition at the 13th South Asian Games on Friday.

Magar will face Vinod Tanwar of India, who advanced after he got a bye, in the semis on Saturday. In the same weight category (49kg), Sojib Hossain Md also advanced beating Pakistan’s Md Dawood Khan to set a semifinal clash with Bhutan’s Wangdi Tashi, who advanced on bye.

Shahi will battle against Sri Lanka’s Jeewantha Nisshanka in the semis on Sunday. Nisshanka advanced via bye.

Similarly, in the same weight category (60 kg), Bangladesh’s Sura Krishna Chamka and India’s Varinder Singh will meet in the semis. Both had advanced through the bye. Thapa will face Md Al Amin, who progressed via bye, in the semis. India’s Manish Kaushik also secured the semifinal clash against Dinindu Du Ponnawila of Sri Lanka, who also advanced via bye, beating Pakistan’s Suleman Baloch in 64 kg weight category.

Unfortunate Shrestha
But it was an unlucky day for Deepak Shrestha as he lost against India’s Ankit Khatana in middle weight 75 kg weight category, despite dominating the match. Shrestha was inches away from the win when Khatana was awarded a knockout in the final minutes of the final round.
Shrestha fell to the canvas but was unable to properly stand on his feet even if he tried to collect quick strength and the referee awarded Khatana a KO victory.