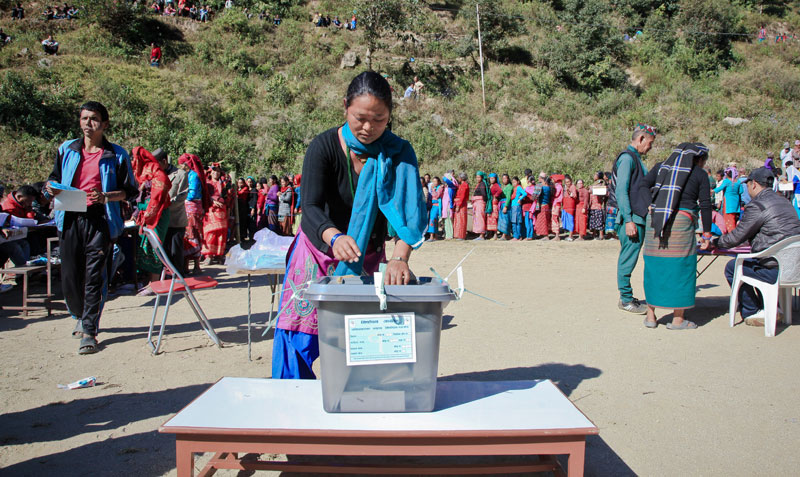 Can Nepal hold three elections – local, provincial and federal – within the next 16 months or by December 2017 as envisaged in the new constitution? This is one of the biggest questions facing Nepal and Nepalis today. In a proposed roadmap, the government plans to hold the local body elections by December 2016, state assembly elections by May 2017 and elections to the federal parliament by December 2017.

Holding these crucial elections within the stipulated time is the key to implementing the new constitution. This should be why the erstwhile KP Sharma Oli government on June 16 this year announced to hold all three elections by the end of 2017.

Precisely speaking, there are three pre-conditions to holding local polls by December 2016 – convincing the Madhes-based political parties to own up the new constitution; demarcation of provincial boundaries; and restructuring of local bodies alongside delineation of electoral constituencies. After that, say EC officials, the Commission would need at least 3-4 months for technical preparations to hold the polls.

But the reality is the current government is far from announcing the local poll date anytime soon.

The last time local elections were held in Nepal was some 19 years ago - in 1997. The local bodies – VDCs, municipalities, DDCs, metropolitan cities – have been without the people’s representatives for the last one and a half decade. So, there is no doubt that local elections need to be held urgently. The country has seen nearly two dozen governments over the past two decades but holding local elections could become a priority for none of them.

In short, the constitution needs to be amended before the local polls can be held. But an amendment to the constitution is a job easier said than done. The CPN (UML), the main opposition now, has already started saying that such an amendment is unnecessary and is sure to invite conflict. An amendment to the constitution requires a two-thirds majority in parliament which will not be possible without the support of the seven-party Opposition Alliance which includes Oli’s CPN (UML) and Kamal Thapa’s RPP-Nepal. Together, this alliance has 223 members in the 598-member Legislature-Parliament. The Alliance has already decided to stand “against any attempt to amend the constitution so as to weaken the national integrity and sovereignty.”

And needless to say, if the government tries to hold the polls without amending the constitution, then that is not possible. The United Democratic Madhesi Front will not allow that, at least in the Tarai. Madhesi parties have already opposed any step towards constitution implementation before their demands are addressed.

Therefore, in the absence of a broader political consensus among almost all the political parties in Parliament, the prospects of getting the ground ready for elections look bleak.

But we should not forget that the new constitution attests to the risk involved as the failure to hold all the three elections the stipulated time will end the relevance of those holding the reins of power. That will be a serious setback to the implementation of the new constitution.

Prime Minister Pushpa Kamal Dahal was lucky to get a second chance to become the country’s chief executive. But his days at Singha Durbar are not going to be easy.

KATHMANDU, Aug 17: The Election Commission (EC) and the major political parties have agreed to conduct the provincial and parliamentary... Read More...

Democracy could be strengthened by holding three-tier of elections: Deuba