SAPTARI, Aug 30: Over 500 houses in villages of Saptari district, where floods wreaked havoc on Monday night, are still submerged in water. Victims are staying in open areas without proper food and clean drinking water. The water level has not receded even on the third day of disaster.

“We are feeling so helpless. There is no roof above us to shelter from rain and heat, no water to drink, no food to eat and no clothes to wear,” said Jaleshwor Mukhiya, one of the flood victims. “We cannot go inside our house as the water level has not decreased. There is nothing left in our home as all our belongings have been swept away by the floods.”

A resident of Hanumannagar Kankalini Municipality – 12, he expressed serious concerns for the wellbeing of his children stating that they are very young and as such could fall sick. “How will take care of them, if they fall sick?” he wondered.

Mukhiya urged the local, provincial and the central governments for availing relief to flood victims stating that even after three days of being displaced by the flood, they have not been provided any relief materials.

On Tuesday, Nawal Kishore Sah, Minister for Social Welfare of Province 2 had visited the flood victims in Hanumanngar. His son, Shailesh Kumar Sah, is mayor of Kankalini Municipality and is presently in New Delhi, India for medical treatment.

“The minister came here with some VIPs, including the chief district officer and other officials. He talked with some of us and went away within an hour of promising immediate relief. But, so far we have not received anything,” Dev Kishun Pandit, a flood victim said.

Pandit stated that the situation of the flood victims is as it was on the first day. They are hungry, thirsty and worried. The local administration has not even erected tarpaulins for them and this has greatly disappointed the victims. Simultaneous and at times concurrent rainfall and sun, is taking toll on their health. Adding to it, lack of water and food has further hit the displaced harder.

“At least the authorities could come here and provide us tarpaulins. We don’t have even tents to take shelter. When your local and state government do not take care of you, where should victims of natural disasters go for relief?” he questions to express dissatisfaction towards the authorities concerned.

“Some generous people gave us a light snack. It was not a help by the government but by locals, so we are grateful. But such snacks cannot wade off hunger for many hours. We have children, elderly people, and pregnant women to feed,” Sada said.

Most of the families hit by Monday’s floods are Dalits and squatters. They said that they are not in a condition to deal with the disaster on their own. “We are not rich people. Nobody has money with them to go to the market and buy something to eat,” she said. “We are the people who earn in the morning and buy meals for our family in the evening.”

“Koshi maiya (Koshi River) treated us very cruelly,” noted another flood victim, Koshi Raut. The river should not have hit poor, innocent people, he opined. “But flood always displaces only poor people like us, it does no harm to those who are well off. Maybe we are going through all these because we committed sins in our past life,” he consoled himself.

The water flow level in Koshi Barrage is 160,000 cusec. This level was enough to trigger floods in the Nepali village near the border. Locals have long urged the government to deal with the Indian authorities to repair embankments of the river. ‘But their plea has fallen on deaf ears so far’, they state.

As per the agreement between the two countries, India is supposed to repair the embankments in order to prevent such losses.  However, this is not taken care of by governments on either side of the dam. “Neither the Indian government nor our own government is concerned about our lives,” Rajesh Jha, coordinator of disaster management program at the Tilathi Koiladi Rural Municipality said.

He informed that Koshi floods have done massive destruction this time. Every monsoon, Koshi is a huge threat to people in this part of the district. Villages on the Nepal side of the dam are more vulnerable to flood. “There have been flooding every year, but this time, it turned even disastrous,” he stated.

He, however, did not share any relief programs from the rural municipality for the flood victims. “We are trying to do something,” he said. Locals claim that the flood this time was as massive as it was 25 years ago. “This time, we faced disastrous floods,” Mukhiya stated.

Victims have urged government for providing immediate relief materials like clean drinking water, shelter, and food. “If the government delays in providing even basic necessities, I don’t think we will survive,” Mukhiya said. 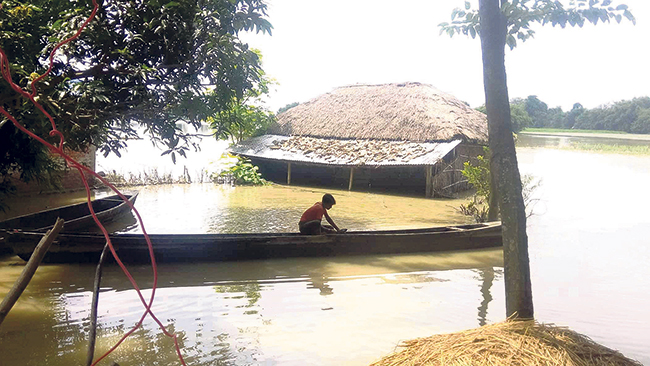 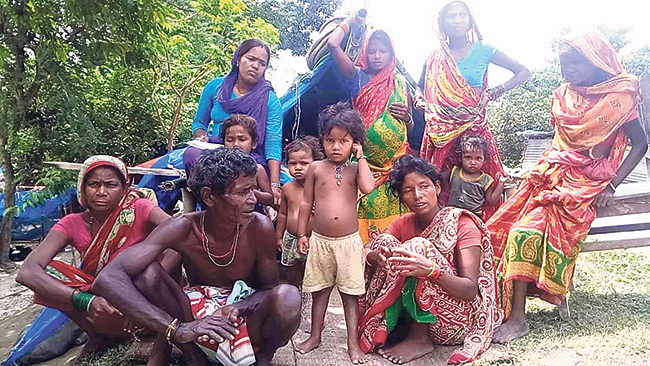 Flood inundates over 3,000 hectares in Saptari