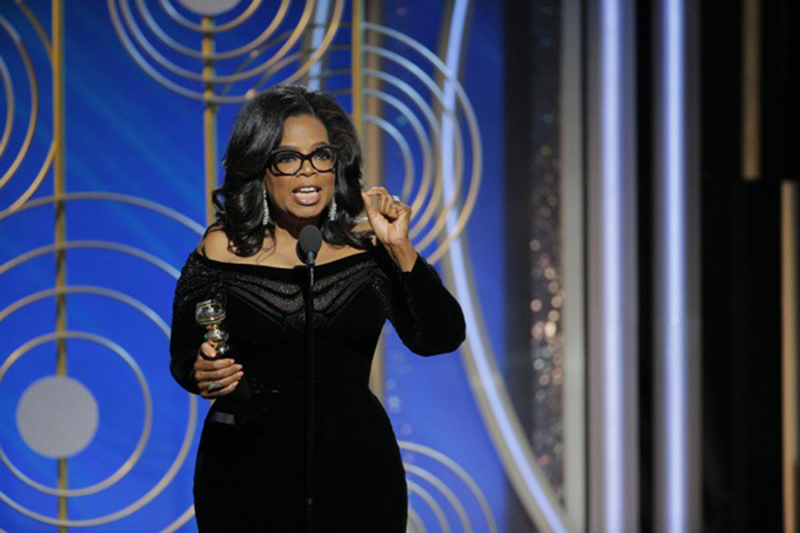 LOS ANGELES, Jan 8: Dark drama “Three Billboards Outside Ebbing, Missouri” was the big winner with four Golden Globes awards on Sunday on a night marked by scathing jokes about sexual harassment and passionate odes to those breaking their silence.

However, the night was dominated not by who took home prizes but by jokes and speeches about the sexual misconduct scandal that has rocked Hollywood.

Multiple allegations against actors, filmmakers and Hollywood agents since October 2017 have led to many of the accused being fired, forced to step down, or dropped from creative projects.

Referring to the male nominees gathered in Beverly Hills for the top television and movie awards, Meyers said: “This is the first time in three months it won’t be terrifying to hear your name read out loud.”

The evening began with the normally colorful red carpet transformed into a sea of black gowns as every actress showed solidarity with victims of sexual harassment inside and outside the entertainment industry. Many have given their own harrowing accounts.

Women kept up the theme inside the Beverly Hilton ballroom.

“This year, we became the story,” Oprah Winfrey said in a rousing speech while accepting the annual lifetime achievement award.

McDormand said she was proud to be a woman in the industry. “It’s great to be here and be part of the tectonic shift in our industry’s power structure,” she said.

Laura Dern, a supporting actress winner for “Big Little Lies,” said: “May we teach our children that speaking out without retribution is our culture’s new north star.”

The HBO TV series was one of several female-driven winners on Sunday.

The Golden Globes ceremony, the first of the major awards shows in the run-up to the Oscars in March, marked the first big test for how Hollywood would handle the scandal.

Meyers joked that, as the first of the hosts, he felt like “the first dog they shot into outer space.”

He appeared to have found the right balance, getting cheers in the room and warm early reviews. Industry website Deadline.com said Meyers “deftly executed a seemingly impossible task,” while E! News said he “made lemonade out of lemons.”

Fox Searchlight and parent company Twentieth Century Fox were the big winners in terms of studios, with their films winning seven awards. Indie movie studio A24 had three.