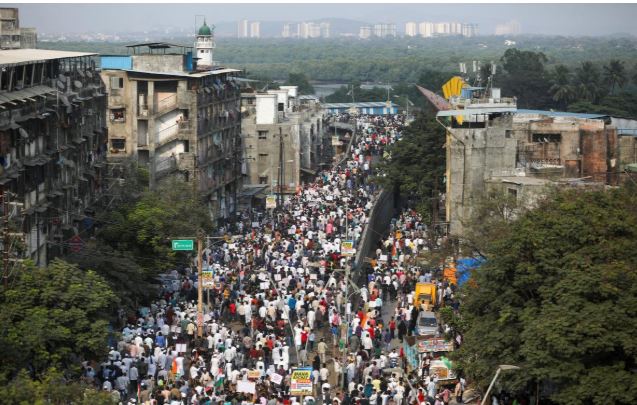 NEW DELHI, Dec 19: Thousands of people took to the streets in India again on Wednesday against a new citizenship law based on religion that has touched off violent unrest, and a southern state imposed curbs on public gatherings to pre-empt further demonstrations.

Prime Minister Narendra Modi’s government says the Citizenship Amendment Act (CAA) is intended to address the persecution of non-Muslim minorities such as Hindus, Sikhs and Christians from Afghanistan, Bangladesh and Pakistan.

Those groups, many of whom have been languishing in India for years without rights, will now get an automatic path to Indian nationality if they came from these three countries before 2015.

India’s Supreme Court turned down a plea on Wednesday to halt implementation of the law but said it would hold hearings next month on the sweeping measure, which critics have described as anti-Muslim.

Protesters say the exclusion of Muslims betrays a deep-seated bias against the community, which makes up 14 percent of India’s population, and that the law is the latest move in a series by the Hindu nationalist government to marginalise them.

With more demonstrations likely, authorities in the southern state of Karnataka have moved to ban large public gatherings in at least three major cities, a police official said.

The restrictions will come into force on Thursday morning, including in the state capital Bengaluru where offices of dozens of multinational companies including Walmart Inc’s (WMT.N) Flipkart, Uber (UBER.N), Infosys (INFY.NS) and Wipro (WIPR.NS), are based.

Similar restrictions will also be imposed in Lucknow, capital of northern Uttar Pradesh state, to head off protests, a local official said.

At a news conference with his Indian counterpart, U.S. Secretary of State Mike Pompeo, said Washington cares deeply about protecting religious rights everywhere, but gave a muted answer on the issue. “We honor Indian democracy as they have a robust debate inside India on the issue,” he said.

Indian foreign minister Subrahmanyam Jaishankar repeated the government’s line that it was a measure designed to address the needs of persecuted religious minorities.

The new measure follows the revocation of the special status of India’s Muslim-majority Kashmir region and a court ruling clearing the way for the construction of a Hindu temple on the site of a mosque razed by Hindu zealots.

“This government wants to turn us into second-class citizens,” he said, as several hundred protesters around him raised slogans, held up banners, and waved the Indian flag.

On Wednesday, police fired shots in the air in a Muslim-dominated part of Delhi to repel thousands of demonstrators throwing stones and glass bottles, demanding the law be withdrawn.

In the northeastern state of Assam, which has seen some of the most violent protests against the CAA, thousands of people came out on the streets of several cities on Wednesday.

“We shall continue with our agitation till we get a favourable response from the Supreme Court,” said Samujjal Bhattacharya of the All Assam Students’ Union.

In West Bengal state, where some protests have also turned violent, four people were injured in scuffles in the Uttar Dinajpur district after a procession against the CAA, local official Arvind Meena said.