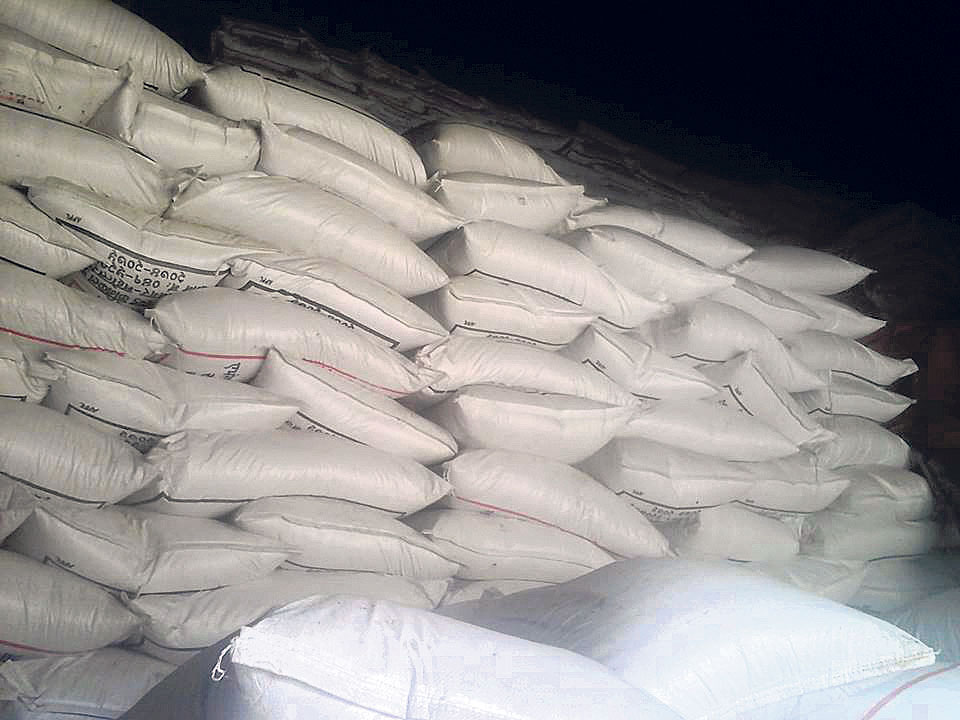 Sacks of sugar are seen in a warehouse of a sugar mill in this undated photo. | Photo: Republica

BARA, Aug 16: Reliance Sugar Industry Bara produced 25,500 tons of sugar this season. But the mill has managed to sell only 6,000 tons so far.

The mill has Rs 1.24 billion worth of sugar in stock in its warehouse, according to Rajkumar Agrawal, promoter of Reliance Sugar Industry -- a member of Shivashakti Group.

As most of its production is lying unsold, the mill has not been able to settle dues worth Rs 570 million to sugarcane farmers.

Similarly, Indu Shankar Sugar Industry has managed to sell only 708 tons of 3,557 tons of sugar that it produced this season. "Nearly 80 percent of our production is lying in our go down," Rajesh Kedia, promoter of the industry, said, adding: "We have Rs 1.24 billion worth of dues to settle, but we have managed to sell sugar worth only Rs 400 million."

The case of Everest Sugar Industry is no different. The mill produced 3,849 tons of sugar this year. But it has managed to sell only 639 tons so far. According to Sashikanta Agrawal, promoter of the industry, the mill has dues worth Rs 1 billion to settle with farmers.

Promoters of sugar mills say that they have not been able to make payment to sugarcane farmers as major chunk of their production is lying unsold at their warehouses. Sugar produced locally is failing to compete with cheaper imported sugar. Even though the government has increased customs duty on sugar to 30 percent from existing 15 percent, imported sugar is still cheaper than sugar produced locally.

This has affected both industries and farmers. As industries are not getting good price for their sugar, they have chosen to stockpile their productions in their warehouses. But sugarcane farmers are on the receiving end.

Meanwhile, data compiled by the Ministry of Industry, Commerce and Supplies shows that different sugar mills in the country have a total of 122,000 tons of sugar in stock. The annual demand for sugar is around 230,000 tons, but supplies, including both imported and local productions, hover above 252,000 tons, the data shows.

Total producton by domestic sugar mills was around 178,000 tons this season.

Farmers have their own stories to share. Mahashankar Theeng, a member of Federation of Sugarcane Farmers, said that many farmers are facing difficulty in arranging two square meals because of the delay in release of payments by sugar mills. "Mills may have their own problem, but farmers are on the receiving end. The government must step in and find a solution to this problem," he added.

Meanwhile, officials of the ministry say that they were trying to sort out the matter. Navaraj Dhakal, the spokesperson for the ministry, said that the government will take some policy decisions to make domestic product competitive in the market. "Along with farmers and consumers, industries are also in our priority. We will try to find a win-win solution for all," he told Republica.

KATHMANDU, Aug 7: The government is subsidizing 50 percent of the premium charge to families purchasing insurance policies against COVID-19. However,... Read More...

KATHMANDU, Aug 7: Despite some selling pressure seen early in the morning, buyers negated the sellers as the Nepal Stock... Read More...

KATHMANDU, Aug 6: Businesses and industries have cut one fourth of jobs during the lockdown imposed by the government to... Read More...

Badala Barilai wins millions of hearts; Saput says he wants to be a superhit
6 hours ago

Badala Barilai wins millions of hearts; Saput says he wants to be a superhit
6 hours ago