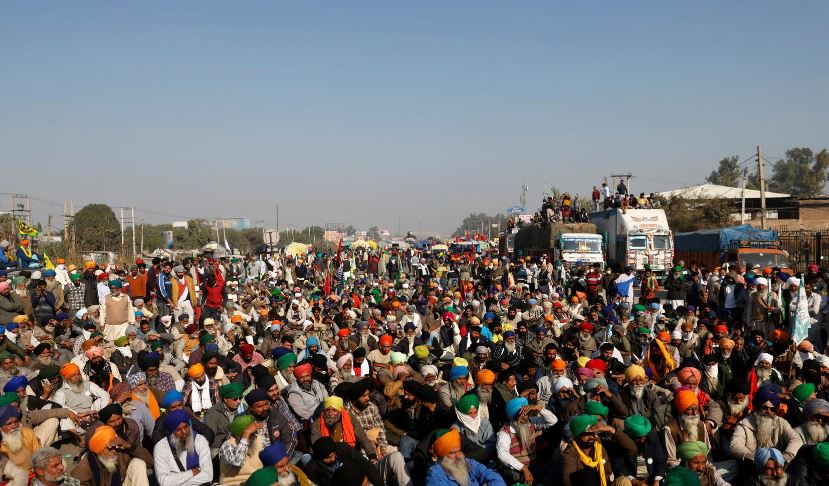 NEW DELHI, Nov 28: India deployed hundreds of police and paramilitary forces at a New Delhi border on Saturday as thousands of farmers from neighbouring states blocked major roads into the capital, in protest against recent agricultural deregulation.

A day after clashes ended with an agreement that the farmers could demonstrate in the capital, tensions rose again in the protests over laws that farmers fear could rob them of minimum guaranteed prices for their produce.

Farmers who arrived in trucks, buses and tractors at Delhi’s Singhu border with Haryana state on Friday, blocked the main northern highway into the capital on Saturday morning, chanting slogans against Prime Minister Narendra Modi’s government and waved the red, yellow and green flags of farmer’s unions.

They appeared ready for a long sit-in and refused to relocate to a designated protest site, raising fears of fresh clashes between security forces and protesters.

On Friday, police fired tear gas and water cannons to disperse the protesters before letting them march into the capital and stage a protest at a designated site.

Both security forces and farmers have installed barricades to prevent a repeat of Friday’s clashes.

Harbhajan Singh, 75, from Amritsar in the major northern farming state of Punjab, said he and others were carrying provisions and were prepared to camp out.

“We have been harassed by the government. We want a special parliament session for withdrawal of the new farm laws,” Singh said, adding he hopes farmers from other states will join the protests to pressure on the government.

“Our slogan was, ‘Hail the Soldier, Hail the Farmer,’ but today PM Modi’s arrogance made the soldier stand against the farmer. This is very dangerous,” Gandhi tweeted in reaction to a photo of a policeman attempting to hit a farmer with a baton.

Modi’s laws, enacted in September, let farmers sell their produce anywhere, including to big corporate buyers like Walmart Inc, not just at government-regulated wholesale markets where growers are assured of a minimum procurement price.

But many small growers worry they will be left vulnerable to big business and could eventually lose the price supports for key staples such as wheat and rice.

The government says there is no plan to eliminate wholesale markets and that farmers have the choice of buyers. It hopes the deregulation attracts agricultural investment and fixes supply chains that lose one-fourth of India’s produce to wastage.

NEW DELHI, August 2: India is unlikely to sign a China-backed Asia-Pacific trade pact because of opposition from industry and... Read More...

NEW DELHI, Feb 12: At least 17 people died on Tuesday as a fire tore through a budget hotel in... Read More...