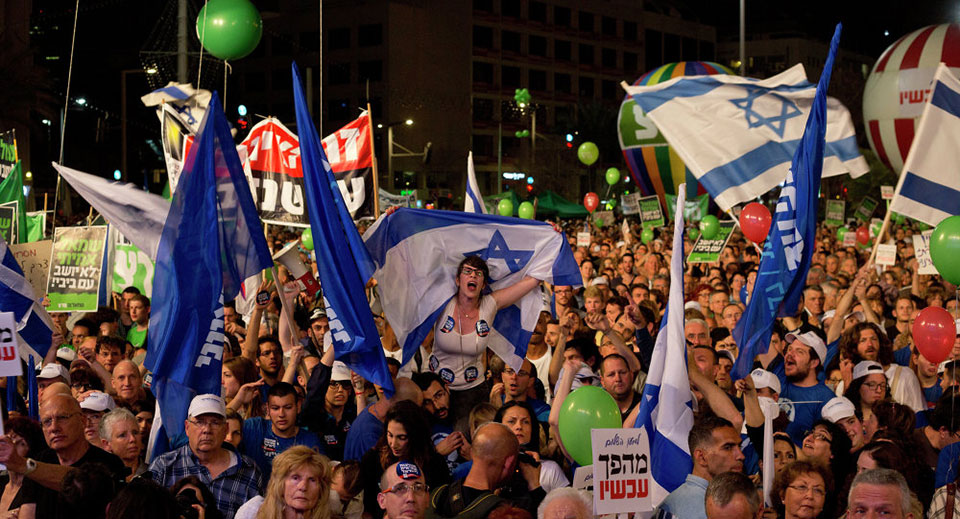 TEL AVIV, Aug 5: On July 19, the Israeli parliament passed a constitutional law declaring Israel to be a "nation-state," which meant that only Jews now  have the right to self-determination. The legislation also declares Hebrew as the official language, stripping Arabic of the same status. The new law has been widely criticized as a complication to the two-state solution to the Israel-Palestinian conflict and as discrimination against the Druze, the nation's most integrated Arab community.

No one can preach to us about loyalty and the military cemeteries testify to this. Despite our utter loyalty, the state does not see us as equal," Sheikh Muwafaq Tarif, the Druze spiritual leader, told the demonstrators in a speech."Just as we fight for the existence and security of the state so we are determined to fight together for the character and right to live in it in equality and dignity," he added.

​According to Reuters, the new legislation has provoked outrage among the country's most integrated minority, the Druze, which are ethnic Arab members of a religious minority that is an offshoot of Islam incorporating elements of other faiths. Their biggest communities are reportedly in Lebanon and Syria.

In Israel they reportedly number 120,000, less than two percent of the total citizenry. Notably, unlike other Arab Israeli residents, who are exempt from military service, Druze are drafted into the conscript army and widely active in mainstream governance and media with some even rising high in the political and military world, Reuters reported.

In June, Israel faced a wave of Druze soldiers and officers quitting the IDF."Why should I serve the state of Israel, the state that I, my brothers and my father have served out of devotion and love for our homeland […] in the end, what do we get? To be second class citizens," Amir Jmall wrote in a Facebook post earlier this week.

"What makes Israel special is its unique social fabric — Jews, Arabs, Druze, Muslims, Christians, Bedouin, Circassians — together we are all Israel," said Yat Salamy, 53, a Druze teacher who attended the protests, cited by Reuters.

The new legislation has been strongly condemned by left-wing groups and Arab community leaders in the country. However, despite their smaller numbers, the Druze community in Israel has great political effect due to their reputation as supporters of the state. Faced with an unexpected backlash, Netanyahu has attempted damage control.

"There is nothing in this law that infringes on [Druze] rights as equal citizens of the state of Israel, and there is nothing in it that harms the special status of the Druze community in Israel," Netanyahu declared on Sunday.

"The people of Israel, and I among them, love and appreciate you. We deeply appreciate our partnership and the covenant between us," the Tel Aviv prime minister said, addressing the minority, but his words have had little effect.

Arab Israelis make up around 20 percent of the country's 9 million population. However, Israeli legislation guarantees them full equal rights. According to Reuters, they face constant discrimination, citing inferior services and unequal allocations for education, health and housing resources.

According to a recent poll published by The Jerusalem Post, almost 58 percent of Israelis support the controversial nation-state law anchoring the privileged status of Jews in the country. Moreover, the new legislation has a solid support of 85 percent among those, who define themselves as right-wing party supporters.

KATHMANDU, Sept 12: The Nepal Medical Association (NMA), the professional organization of doctors, postponed their protests after the Ministry of... Read More...