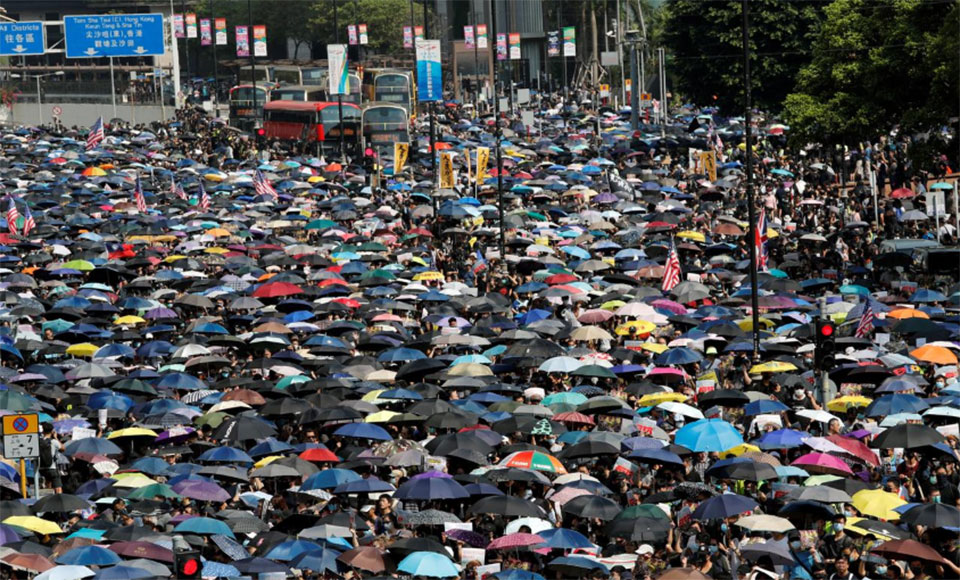 HONG KONG, Oct 20: Thousands of Hong Kong protesters, many wearing masks in defiance of emergency laws, staged an illegal march through the Kowloon district on Sunday which will test the strength of the pro-democracy campaign after four months of unrest.

Police have declared the march illegal meaning the protesters, who range from young students to the elderly, many carrying umbrellas for sun protection, face arrest.

The Kowloon area has been the site of some of the worst violence in recent weeks and tight security has been imposed along the march route, with metro stations closed and police placing water canons on the street.

Protesters are angry at Hong Kong’s leader Carrie Lam for what they see as her failure to protect their freedoms from an encroaching Beijing, imposing colonial-era emergency powers, and allowing what they say is excessive force by police.

“Carrie Lam is not listening to us at all. This may work in China but not in Hong Kong,” said Cheung, a 33-year-old woman wearing a face mask and black Tshirt, symbols of the democracy movement. She declined to give her first name.

“You can’t ask a city that already has freedom to walk backward. You can’t close the door and keep everyone inside. You can’t do this in an international city,” she said, adding she was not afraid of being arrested.

Hong Kong has been battered by months of often massive and violent protests, the worst political crisis since Britain handed the city back to China in 1997.

The crisis in the Chinese-ruled city also poses the biggest popular challenge to China’s President Xi Jinping since he took power. Xi has vowed to crush any attempt to split China.

The unrest was sparked by a bill that would have allowed extradition to mainland China for trial in Communist Party-controlled courts. It has since widened into a pro-democracy movement.

Hong Kong has been relatively calm in the past two weeks after violent protests fuelled by the introduction of emergency laws, which ban face masks at public rallies.

Protesters have 5 core demands: universal suffrage, an independent inquiry into police action against protesters, amnesty for those charged, and an end to describing protesters as rioters, and the formal withdrawal of the extradition bill.

Lam has said the bill is dead, but it is yet to be formally withdrawn. She has rejected the other demands. On Sunday she said a police complaints inquiry will be completed before the end of the year.

Two people have been shot and wounded by police and thousands injured. Police have arrested more than 2,300 people since June.

Hardcore protesters have in recent weeks targeted mainland Chinese businesses, daubing them in graffiti and at times setting fires, while mainland Chinese living in Hong Kong have begun to express fears for their own safety.

The city’s metro network, which carries some 5 million people daily, has been torched and trashed, and at one stage was forced to completely shut down.

Subway operator MTR Corp Ltd (0066.HK) said several Kowloon stations were closed on Sunday, the airport express would not stop at Kowloon, and the network will again shut two hours early at 10 pm.

The destination of the march is the West Kowloon station, the main railway interchange with mainland China, where authorities have heightened security and restricted access.

Hong Kong is governed under a “one country, two systems” formula, which permits the city freedoms not available on the mainland such as an independent judiciary.

Beijing has rejected claims it is encroaching on these freedoms and blames Western nations, such as the United States and Britain, for inciting the unrest.

Hong Kong's Cathay Pacific warns against protest outside its premises