Thousands in Indonesia pray on 15th anniversary of tsunami 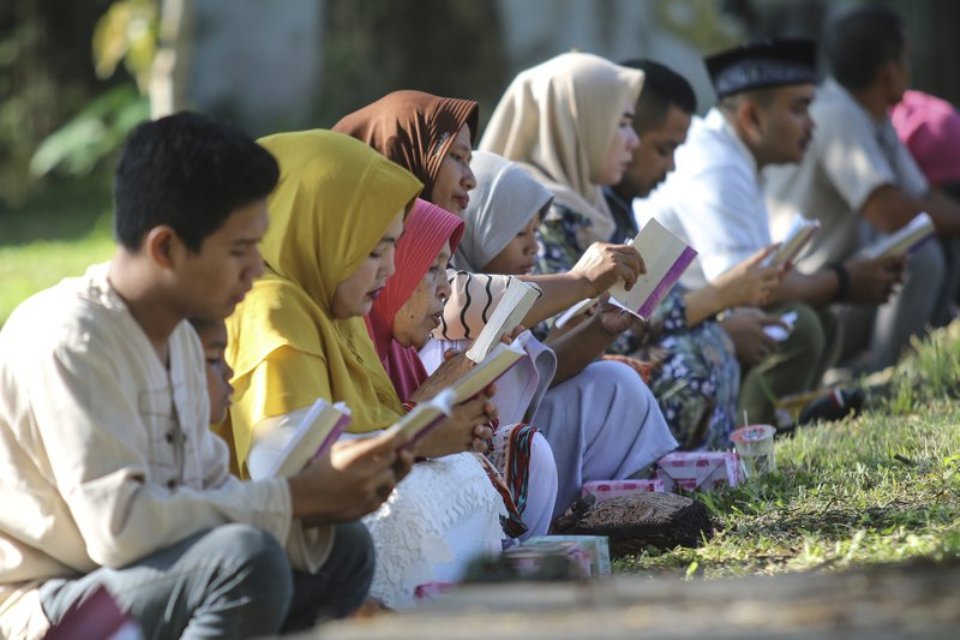 People read the holy book of the Quran as they pray at a mass grave site for the victims of the Indian Ocean tsunami, during the commemoration of the 15th anniversary of the disaster in Banda Aceh, Indonesia, Thursday, Dec. 26, 2019. (AP Photo/Nurhasanah)

The massive Dec. 26, 2004, tsunami was triggered by a magnitude 9.1 earthquake off Sumatra island. The giant wall of water killed about 230,000 people in a dozen countries as far away as East Africa. Indonesia’s Aceh province, which was closest to the earthquake, was hit first and hardest.

More than 170,000 people died in Indonesia alone, about three-quarters of the overall death toll.

“No words can describe our feelings when we tearfully saw thousands of corpses lying on this ground 15 years ago,” acting Aceh Gov. Nova Iriansyah said at a ceremony in Sigli, a town in Pidie district, “And now, we can see how people in Aceh were able to overcome suffering and rise again, thanks to assistance from all Indonesians and from people all over the world.”

Weeping survivors and others attended religious services and memorial ceremonies. Relatives of the dead and religious and community leaders presented flowers at mass graves of tsunami victims in the provincial capital, Banda Aceh.

Shops and offices were closed, boats were not allowed to sail and flags were being flown at half staff throughout Aceh on Thursday and Friday.

Disaster-prone Indonesia, a vast archipelago of more than 17,000 islands that is home to 260 million people, lies along the “Ring of Fire,” an arc of volcanoes and fault lines in the Pacific Basin.

Thursday’s commemoration came four days after the anniversary of last year’s Sunda Strait tsunami, which followed the eruption and partial collapse of the Anak Krakatau volcano. That tsunami struck coastal regions of Banten on Indonesia’s main island of Java and parts of southern Sumatra island, leaving more than 400 people dead and 14,000 injured.