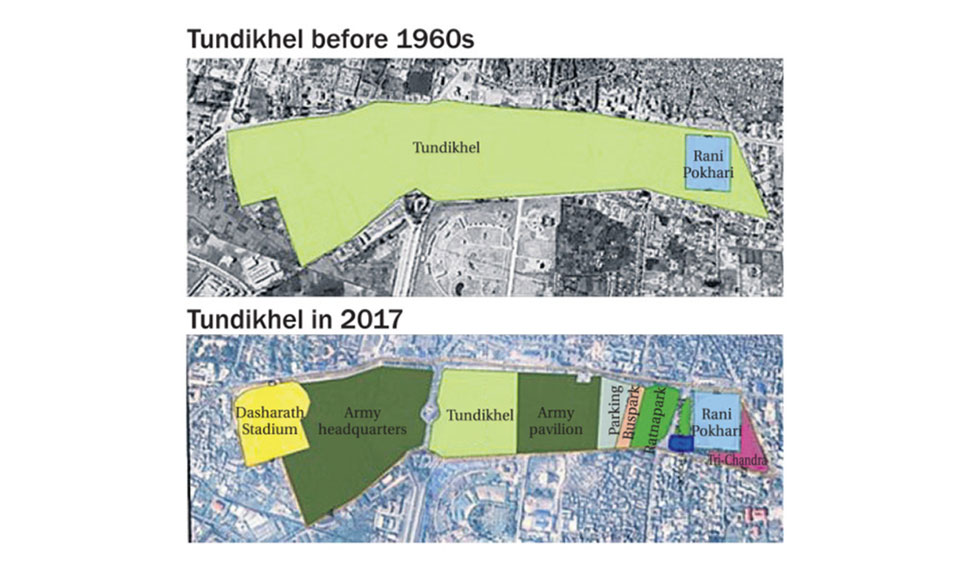 KATHMANDU, Nov 9: Concerned over the ever-increasing encroachment of public space in the capital city, thousands of people in Kathmandu are joining the 'Occupy Tundikhel' campaign in Khulla Mancha starting Saturday.

The campaign to protect the open space of Tundikhel, originally spanning from Ranipokhari to the Dasharath Stadium, will see the campaigners forming a human chain around Tundikhel. The campaign is expected to exert pressure against the illegal encroachment of the commons in the capital city including the Khula Manch.

“We require at least 3,000 people to form a human chain around Tundikhel. But we are expecting several hundred more people in the demonstration that begins at 8 am Saturday,” said Ganapati Lal Shrestha, one of the organizers of the campaign. “The number of people joining the campaign defines the strength of our protest and will exert pressure on the concerned bodies to take appropriate action to discourage encroachment of public space.”

The campaign comes in the wake of mass dissatisfaction among the people in Kathmandu Valley as conservation of open spaces has still not been the priority of the government. Commercial buildings and other structures are being constructed one after another -- all driven by commercial and financial interests of unscrupulous business people or groups -- on public spaces.

There were times when this public park in the heart of the valley expanded all the way from Rani Pokhari to the Dasharath Stadium. But as a result of sheer negligence by the authorities concerned, this park is now barely half of its initial expand, with major portion occupied by the national army.

Only half of the original space is still termed as 'Tundikhel' and other portions are used for various other purposes. While half of the Khulla Manch area (also a part of Tundikhel in the past) has been blacktopped and being used as a bus park since the past few years, the remaining area is occupied by construction materials meant for the construction of Darahara and Durbar High School.

“Tundikhel is a common property of every citizen. It is our nation's soul and where we always take in to represent our country's pride” said Shrestha, adding, “Over the past few years, we have struggled a lot to save this land. We won't stop until our voice is heard and a strong action is taken to restore Tundikhel.”

Tundikhel carries huge significance as this open land also served as one of the greatest shelters to the Valley denizens during the 2015 earthquakes. “The campaign is not just to protest against the Tundikhel encroachment, but every other encroachment happening inside the valley,” said Vijaya Shrestha, who is one of the coordinators of the campaign.

According to a study on land encroachment submitted by the “High-Level Commission on Government and Public Land Probe and Conservation” in 1995, some 9.81 percent of the total public space in the then Kathmandu Metropolitan City was found encroached. “If no one takes action against this, Kathmandu Valley may not have any open spaces left in near future,” said Shrestha, who is also a heritage activist.

As stated by the World Health Organization (WHO) and Food and Agriculture Organization (FAO), at least nine square meters area is necessary for each individual. However, according to the Municipal Periodic Plan (MPP), Kathmandu has only 0.25 square meter open area for each person. Only 0.48% area in Kathmandu is open area.

The Occupy Tundikhel — a three-month-long mass-awareness campaign -- will have events like street plays, cultural processions, painting exhibitions, and poetry recitations program held every Saturday. The resources for this campaign will be generated purely on the basis of need for each activity and its funds and expenditures will be publicized to ensure transparency, according to the organizers.

Hundreds of people gathered at Khula Manch of Kathmandu on Saturday to express solidarity with “Occupy Tudikhel” campaign. People from... Read More...

KATHMANDU, Nov 10: Hundreds of people on Saturday gathered at Khula Manch in the heart of the capital to express their... Read More...