Those found committing mistakes during probe will be penalized: IGP Khanal 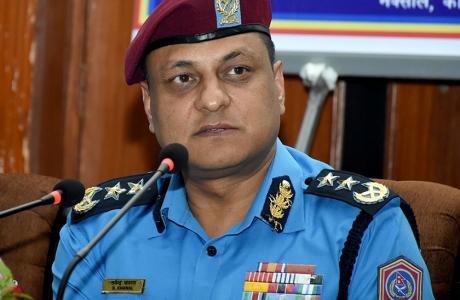 KATHMANDU, Dec 24: Inspector General of the Nepal Police Sarbendra Khanal asserted that he would leave no stone unturned to book the culprit involved in the murder and rape case of Nirmala Panta.

Organizing a press meet at the Nepal Police Headquarters, Naxal on Monday, IGP Khanal clarified that those found committing mistakes in the course of investigation would be penalized in accordance with the criminal and administrative act.

He further said that they have been using a lot of means and resources in the investigation of the Nirmala’s murder and murder case.

“We are investigating the Nirmala case with all our might and have mobilized all our available resources. We are about to reach the conclusion,” clarified Khanal.

IGP Khanal leaves for US

Stay order to stop appointment of IGP to continue

KATHMANDU, Feb 19: The Supreme Court today has decided to continue the stay order in the name of the government... Read More...