This is a govt of tyrants, feudalists and mafia: Ex-CJ Karki 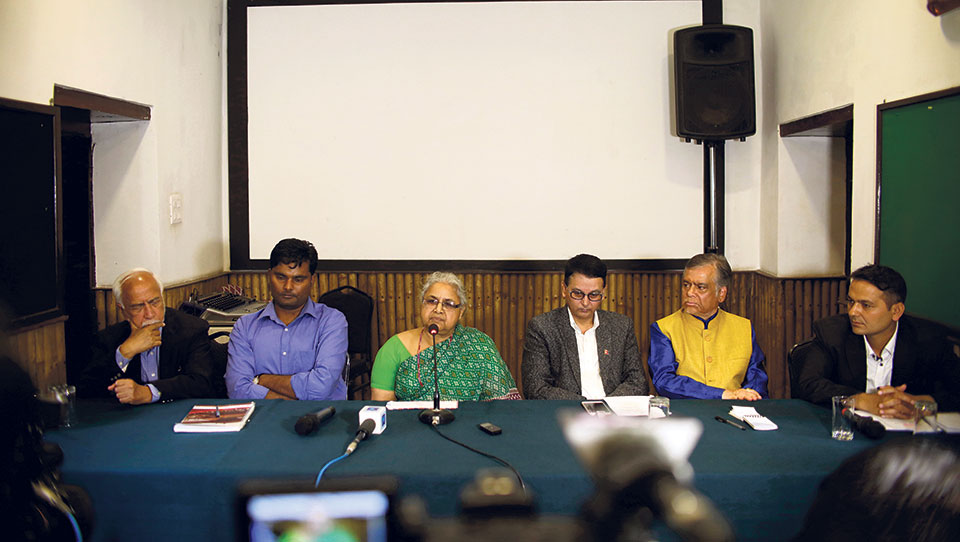 KATHMANDU, July 4: Citing the government’s blatant apathy toward Dr Govinda KC’s agenda for medical education reform and Ganga Maya Adhikari’s struggle for justice, former chief justice Sushila Karki has said that this is a government  of tyrants, feudalists and the mafia.

Speaking at a function organized by the Public Defense Alliance on  concerns over restrictions against peaceful demonstrations and the issues raised by Dr KC and Ganga Maya, Karki said there is no difference between the Panchayat regime and other governments if they are going to treat Dr KC and Ganga Maya in this fashion.

“The present government is a government of tyrants, feudalists and mafia if its intention is to snuff out Dr KC’s demands,” she said.

Former CJ Karki further said that Dr KC is doing nothing out of personal interests as he has no wife or children. “Dr KC’s agitation is only focused on accessible and cheap health services and medical education in the country. His demands are not his personal demands but that of the people. Is it a crime for Dr KC to fight for the people?” she said. “But the government that never tires of talking about the people has done nothing special for the welfare of ordinary folks and the poor in rural and  remote  areas.”

Dr KC started his 15th hunger strike on June 30 in Jumla, demanding a replacement bill for the National Medical Education Ordinance without any  changes, as per the spirit of the  Mathema taskforce report submitted to the government three years ago. Education Minister Giriraj Mani Pokharel was education minister then also.

Those in the present government vandalized road railings and held demonstrations at Maitighar Mandala when they were in the opposition, said Karki. “However, now that they are in power, they have prohibited people from protesting peacefully at that very venue and venting their opinions. This is against the spirit of the Constitution,” she added. “Do you call this a government of the people ?”

The government is strangling Ganga Maya and her family, said Karki. “Everyone is doing her injustice. Her son was killed by the Maoist rebels when he was merely out to share with  relatives the joy of having completed his school education, and her husband was also killed by the government subsequently while he was staging a hunger strike for justice,” she said. “The prime minister  talks big about ships and railways but the ordinary people are up to their neck in hassles and woe. They are forced to consume items contaminated with poison.”

“Ganga Maya is a historic person. Wouldn’t the political leaders also weep if their sons are killed?” Karki asked. “She is a goddess and is bereft of justice. If she dies during her fast-unto-death, it will be a great shame for the government and the country.”

Ganga Maya of Fujel, Gorkha district started her hunger strike at Bir Hospital on May 29, demanding  punishment for those who killed her son Krishna Prasad. She asked the government to arrest Chhabilal Paudel, his son Parshuram Paudel, nephew Bhimsen Paudel, Ram Prasad Adhikari and Januka Paudel for murdering her (Ganga Maya’s) son  in 2004 during the Maoist armed insurgency.

This is her third hunger strike. She  and her husband Nanda Prasad had first launched their fast-unto-death in January 2013.

The couple, who began their second fast-unto-death the following month, ended it on the 47th day after an agreement with the government. The agreement included action on the First Information Report filed against some suspects, including Parshuram Paudel. But the arrested suspects were released later.

At the function, Prof Kedar Bhakta Mathema, former vice chancellor of Tribhuvan University, human rights activist Charan Prasai, senior advocate Surendra Bhandari, advocate Om Prakash Aryal and Dr Abhishek Singh said Dr KC’s demands are rational, legitimate and in the interest of the people and the nation. They stressed the need to ensure justice for her, terming justice for her as justice for all people.

KATHMANDU, August 5: Joining a mass rally in support of the demands raised by Dr Govinda KC, who has been staging... Read More...